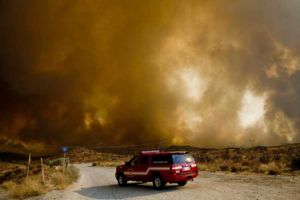 The smoke from California wildfires can have serious health consequences even for people who don’t consider themselves at risk. Living on Earth’s Ingrid Lobet spoke with two medical experts and has our report.

YOUNG: From the Jennifer and Ted Stanley studios in Somerville, Massachusetts, this is Living on Earth. I’m Jeff Young.

The biggest blaze in the modern history of Los Angeles County may well yet set another record--the most Americans exposed at one time to the pollution generated by wildfire. 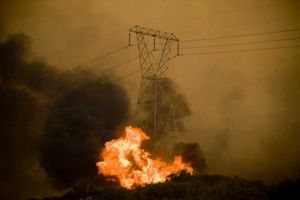 The “Station Fire” raging in the hills above Acton, California. (Photo: Michal Czerwonka, Courtesy of the EPA)

About 18 million people live in Greater Los Angeles, a region that all too often tops the list of the nation’s worst air quality.

So, what does the addition of all that smoke into already smoggy LA mean for public health?

From Los Angeles Living on Earth’s Ingrid Lobet reports that it’s not just those people with respiratory problems who are at risk.

LOBET: Westerners are used to fire, and getting more used to it. But this most recent inferno, right on LA's north flank, impressed even the battle worn.

AVOL: This really has been a terrible catastrophe and it's SO widespread and the volume, the mass, the size of this… is just unbelievable.

LOBET: Dr. Ed Avol is a 40-year resident of the city. He's also an air pollution expert who teaches at USC medical school. Dr. Avol says smoke is filled with tiny particles. It's an especially intense form of air pollution.

AVOL: Well, the levels have been pretty extraordinary. In some of the inland valleys and across the whole city you can see the smoke pervade everywhere. The levels are in some places 10 or even 20 times above the standards, so they really are quite dramatically high.

LOBET: Dr. Avol says many people mistakenly believe that it's those with asthma who suffer most from the fires.

AVOL: Asthmatics tend to sort of be more aware of their body, more aware of their response to their surroundings and tend to take personal protective behavior. And so where the asthmatic child might say 'I don't feel right, I'm not going to exercise as much today,' their healthy peer may run around and over expose themselves.

And in fact we've done studies that reported that it's that group of non-asthmatics that have larger effects than the asthmatic children, and that of course, covers a much larger group.

MOROCCO: The percentage of the population that is really at risk is probably much greater than we talk about in the mass media.

LOBET: Mark Morocco is a supervising emergency room doctor and an associate professor at UCLA medical school. He also says people underestimate exactly who is affected by smoke.

MOROCCO: In fact, if you want to be really realistic about it, you probably should include everybody who breathes, even those folks who are healthy and essentially have no respiratory or cardio-pulmonary problems or would put themselves in a category like that are probably at some risk. 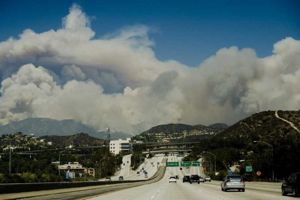 LOBET: Your body uses mucous to trap particles, viruses and bacteria. Tiny hair-like cilia, line the airways, and help move that mucous out of the body. But smoke slows the action of the cilia leaving irritants and pathogens freer to move deep into the lungs and set up shop there.

MOROCCO: So once you are exposed to smoke, we know that you are at increase risk for any kind of infections and so we could se a real uptick in our flu season, we could see an increasing number bacteria pneumonias, especially in elderly and immuno-compromised folks, folks who have other health problems.

AVOL: The big question we don't all know yet is whether repeated short insults like this lead to some permanent deleterious event, you know, where the tipping is.

LOBET: Can two weeks of fire every year for your first seven years cause asthma?

AVOL: Right, that's the question that we don't know yet. I mean clearly these insults-- because when the levels of pollution are so high, that you‘re getting dramatically increased exposure. Whether this leads to some lifelong problem while your lungs are growing, while your systems are developing, really is an issue and is something we should be thinking about. 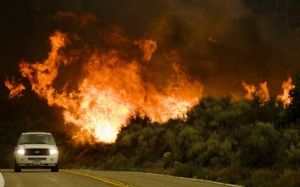 LOBET: And both doctors Avol and Morocco say climate models that predict more heat and dryness in the western U.S. give them pause thinking about people's exposure to fire and smoke. Dr. Morocco.

MOROCCO: If it turns out that the models that are postulated are true, and we go into having sort of 12-month fire season, we are going to spend our time essentially in an experiment where we are exposed to particulate matter continuously, where you’ll essentially be immersed in a soup for a long time, and then there is no telling what that will do in terms of long term health care and public health. But in terms of short-term public health, I think we are bound to see many people with more acute and more threatening pulmonary illnesses all around the calendar.

LOBET: Dr. Morocco says physicians will treat these patients as best they can one by one, but fire and smoke raise larger questions such as: how many of us live near the tinder dry woods, and even which cars we drive, far beyond the fire lands.

For Living on Earth, I'm Ingrid Lobet in Los Angeles.