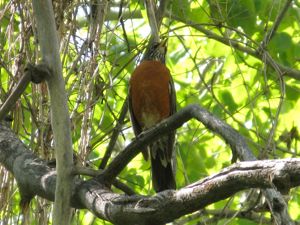 In the last ten years, the West Nile Virus has become the most commonly contracted, mosquito-transmitted virus in the Western Hemisphere. Scientists are trying to figure out how and why the infection has spread so quickly. In Connecticut, researchers discovered that the American Robin is the primary host. Producer Laurie Sanders went out with a group of scientists who are counting robins and trapping mosquitoes to find out more about West Nile.

YOUNG: Ten years after it arrived in North America, West Nile Virus is in decline. The Centers for Disease Control says the number of reported cases in the US is down sharply.

But people aren’t the real target for West Nile. Producer Laurie Sanders visited with a team of scientists learning more about the virus by studying its primary hosts: birds.

SANDERS: When West Nile Virus appeared in New York City in 1999, it showed up first in birds, particularly crows. For the first few years, infected crows were dying by the thousands. At the time, the assumption was that crows were playing a major role in the virus’s cycling and transmission. But in 2005, a Connecticut-based study revealed that crows were not the main carrier. Instead, it was the familiar and beloved American Robin.

FOLSOM-OKEEFE: What we’re doing here tonight is we’re counting robins as they come into a roost. We’re in a suburban backyard in Hamden, CT. The robins like to roost in these trees.

FOLSOM-OKEEFE: And they started roosting maybe about two weeks ago and they’ll continue to roost probably into September and we’re interested in the role of roosts in West Nile Virus transmission.

SANDERS: These robins will spend the night together here, and come daybreak, they’ll fly away. In the case of many of the adult males, that means back to their nest site to help their mate with the business of raising a second brood. When the day’s over, they’ll come back again to this roost. Folsom-O’Keefe says at its peak, this site will have about 2,000 robins, but other roosts have more.

During the next few months, she and her team be visiting 6 roosts in the New Haven area, counting robins and trapping mosquitoes. In the process, they’re hoping to answer several questions. For instance, in the roost, in such close quarters, can robins actually infect each other with West Nile Virus? Is the virus infection rate higher in mosquitoes trapped near roosts? Does the mosquito infection rate vary between roosts? And, what is it about robins that mosquitoes find so appealing—are they actually secreting some special odor?

SANDERS: It’s here at the Connecticut Agricultural Station in New Haven that researchers are working with Yale to try to help answer these questions. The station is responsible for the state’s mosquito surveillance program, and each summer, at dozens of stations around the state, they trap about 200,000 mosquitoes. All those mosquitoes are sorted to species and tested for viruses.

Mike Thomas is one of the mosquito experts in the lab. He says back in 2005, it was this lab that had gathered the evidence that showed that crows played a small role in the spread of West Nile Virus and robins a much bigger one. And the evidence was right in the bellies of the mosquitoes.

THOMAS: Here’s a blood meal. This is really good to see. I would say it’s partially digested, It’s mostly black with just a little bit of red. So this one here we’re going to pull out and put in a separate tube. For the blood meals we only put one mosquito per tube. So that when doing the molecular analysis, it will be specific just for that one mosquito.

SANDERS: Capping the tube, Thomas puts the vial with the mosquito on ice. Thousands of vials are in this freezer.

[SOUND OF OPENING THE FREEZER DOOR]

MOLAEI: This is a scientific refrigerator that has the capability to go below -80 Celsius.

SANDERS: Goudarz Molaei, a molecular biologist, is responsible for analyzing the blood.

MOLAEI: …and prevents DNA degradation. We have in this freezer several 1000s of mosquitoes, blood engorged mosquitoes, collected from many regions in the US.

SANDERS: To do the analysis, Molaei clips off the blood filled belly from the rest of the mosquito’s body.

SANDERS: The abdomen is then placed in another vial, and using a series of techniques that were developed here—--Molaei is able to isolate the DNA in the blood, replicate it, and then by comparing the DNA sequence with an NIH database, he can figure out exactly what kind of animal the mosquito fed on. And it turns out mosquitoes are choosy. Some species feed only on reptiles and amphibians, others just on mammals, and some just on birds.

Molaei says when it comes to a mosquito-transmitted virus like West Nile, the mosquito species that are really important are the opportunistic feeders that readily switch between birds and mammals. And that includes us. In Connecticut, there are really two important species like that. And what Molaei found when he analyzed their blood meals, was that they had fed on many kinds of birds, but 38% of them had fed on robins.

MOLAEI: And 38% is a great percentage because when we analyze the mosquito blood meal we delt with over 30 species that mosquitos fed upon.

SANDERS: Molaei says based on that number, it’s probably also true that migrating robins played a key role in the rapid spread of West Nile Virus across North America and into Mexico and Central America. In just ten years, West Nile has become the most commonly contracted, mosquito-transmitted virus in the western hemisphere. However, there is some good news.

During the last two years, the number of human cases in the US has decreased sharply. As of late August, the Centers for Disease Control had reported only 123 confirmed human cases and four fatalities in 22 states. Less than a third as many as last year. Just why the decline has occurred is uncertain, but scientists speculate that through exposure, birds and humans may be developing a natural immunity. For Living on Earth, I’m Laurie Sanders.