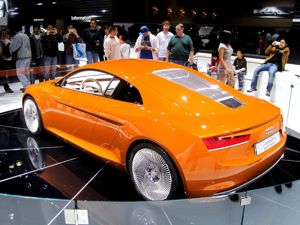 Capitol Hill’s bailout money is electrifying the Motor City. Car writer Jim Motavalli is at the Detroit Auto Show and tells host Jeff Young about the rollout of hybrids and plug-ins.

YOUNG: From the Jennifer and Ted Stanley Studios in Somerville, Massachusetts – this is Living on Earth. I’m Jeff Young. America’s most famous auto show kicked off in Detroit, the first since the bankruptcies and bailouts that shook the auto industry. Nearly every major automaker is showing green cars. Efficient – and often electric – rides are the big story.

Jim Motavalli’s there. He blogs on green cars for The New York Times, B-NET and others. Jim, so much has changed for carmakers, what’s the auto show like now?

MOTAVALLI: Well, I think you have to sort of take this show in context. On one level it’s a lot less glitzy than they tend to be, in the sense that there’s not as many big productions of new model introductions, there’s not as many spokes models on the floor as there generally is, usually that’s a the big thing.

On the other hand, the cars that are being debuted here are green cars that actually will go into production – that’s the big difference between now and a couple years ago. Generally, automakers have produced their green vehicles sort of as a showpiece thing, and it revolves on the show stand but is never actually produced.

YOUNG: But the cars you’re seeing are ones we might actually one day get to buy? That’s what you’re saying?

MOTAVALLI: Yes. Yeah, very much so, like for instance Audi showed off an E-tron, which is a second electric car prototype. Toyota had a very good, new hybrid car that’s smaller than the Prius. And Honda also had a new hybrid that is going into production, and it’s the CRZ, it’s a two-seater hybrid that gets 40 or so miles per gallon. 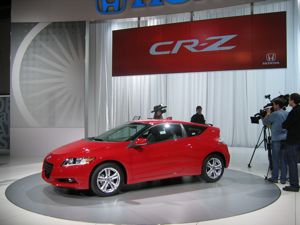 YOUNG: What about costs because take, for example, GM’s Volt – there’s been a lot of publicity around the Volt which is rolling out this year, I guess. How close do you think we are to these green cars that you’re seeing at the show there being within reach of your average, middle-class consumer?

MOTAVALLI: Well, there’s no getting around the high cost of batteries. Any car that’s going to have batteries in it, in particular, the battery-only electric cars; they have a lot of battery in them and there’s no way you’re going to put that battery in there for less than ten thousand dollars your cost. 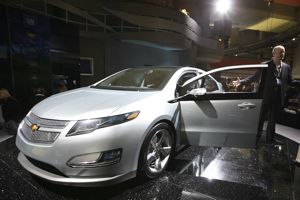 Chevrolet plans on releasing their plug-in hybrid Volt in the fall. (Photo: eschipul)

Therefore, you got to pass that on to the consumer. So even if you have a generally what you might call an economy car, it’s still going to cost 30 thousand, at least, and edging up into 40. So, 40 for the Volt is unfortunately not an inflated price, it probably is more like a break even or a lose money price for them.

YOUNG: Sounds like there’s a lot riding not just on the bailout money itself, but on the government money that’s going into supporting battery manufacture?

MOTAVALLI: Yes, there’s a lot riding on that. We’re really gambling big on the battery. Every possible way of reducing the cost of that is being pursued, but it still doesn’t get you everywhere they need to go. The lithium ion battery is the most affordable, the lightest, and the smallest in terms of packaging. Beyond that, I think we’re in the experimental realm. And right now, we’re still looking at fairly expensive battery packs.

YOUNG: There’s a lot of buzz around Ford. The Ford Fusion hybrid just won car of the year, not green car, mind you, overall car of the year. I mean this is the company – F-O-R-D used to stand for Found On Road Dead; is this the same Ford company that used to be mocked not long ago?

MOTAVALLI: Well, I think you really have to give a lot of credit to Ford as having come back from the grave. They’re the only one of the big three that didn’t take a government buyout, and I think in some ways that’s helped their credibility and helped them move quicker in terms of getting new vehicles out. 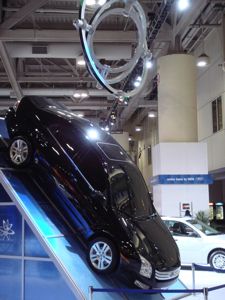 And they’ve got all kinds of things – the new Ford Focus was debuted here, and I interviewed Bill Ford yesterday and I’ve always thought he was a very sincere guy in terms of his environmental convictions.

YOUNG: Let’s hear a bit from your talk with Bill Ford, Jr. He says he wants Ford to sell the new Focus all around the world.

FORD: It will be the fuel economy and CO2 leader in every market in the world in which it participates.

MOTAVALLI: That’s a good world car, a very small car, a very fuel-efficient – I think that’s really smart. They’ll probably sell as many of them in China as they do in the U.S.

YOUNG: Of course, there is a lot of money heading into Michigan thanks to the Stimulus Bill and what not, but I’m guessing it’s still a fairly gloomy outlook in Detroit though?

MOTAVALLI: It’s gloomy. Coming in I decided to take public transportation, so I took a city bus and it wound its way through some of the devastation in Detroit and Inkster and Romulus and Dearborn, and you really get a sense of one of the most economically devastated places in the country. The state of Michigan, and Detroit in particular, really needs the auto industry to come back and to the extent that automakers are locating in Michigan. I think it’s a huge benefit and morale boost for the state.

YOUNG: And to what degree is the bailout responsible for the new green car direction that a lot these companies seem to be taking?

MOTAVALLI: I’m not sure that you could wholly say it was a result of that. I think the car companies are seeing the market go in that direction. The result is that by this time next year, if we’re talking next year, I think there are going to be a lot more green cars on the road than there is right now.

YOUNG: Our own Motor City madman, Jim Motavalli, thanks very much.