Goodbye to These Times 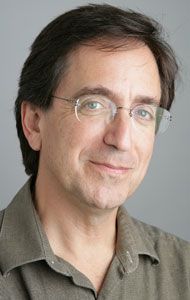 Andrew Revkin says farewell to the environment beat at the New York Times newspaper, and hello to his new role as online communicator, author, and academic. He talks with host Jeff Young about ushering in a transformation in how the public understands climate change, and how human beings as a species might be finally learning to grow up.

YOUNG: Just ahead – he wrote the climate news that was fit to print. A conversation with former New York Times reporter Andrew Revkin. Keep listening to Living on Earth!

YOUNG: It’s Living on Earth, I’m Jeff Young. If you read The New York Times, you might know the name Andrew Revkin. Revkin’s been a Times reporter since 1995, and over the years, his work on environmental issues like biodiversity and climate change has earned him a host of followers and a few passionate critics, like radio host Rush Limbaugh.

YOUNG: Well, shortly after Limbaugh’s rant Andrew Revkin’s byline stopped appearing in the Times, but NOT because of Rush Limbaugh. Revkin has accepted a buyout offer at the Times, which like many big papers is struggling in the new media landscape. Revkin’s leaving daily reporting but he will continue his blog, Dot Earth. Mr. Revkin joins me now to talk about his tenure at the Times. Welcome to Living on Earth.

REVKIN: Good to be with you.

YOUNG: Just to clarify, you did not take Rush Limbaugh’s advice, we’re happy to report.

REVKIN: No, no, I am alive and well and remember, one of the things you learn in science is correlation is not necessarily causation.

YOUNG: [LAUGHS] But this is not too far off the mark from a lot of criticism that you take, particularly from what we would call hardcore skeptics or deniers of climate change issues.

REVKIN: Well, it’s a very heated discourse right now about climate because the consequences are so big, both environmental on one side, and according to the other side a huge economic disruption, a premature abandonment of fuels that have underpinned prosperity for 200 years. So, I’m kind of a convenient battering device for everybody.

YOUNG: I guess I could understand why you get such criticism from say, the skeptics, the deniers – why do you think you also get such heated criticism from folks who attack you from the other side?

REVKIN: Well, I guess it’s because in trying to just sort of suss out on the specific questions related to global warming – what we really know and don’t know – I don’t always paint a picture that matches the idea that human-driven climate change is a here and now unfolding catastrophe, that there’s no argument anymore.

YOUNG: And you disagree with that?

REVKIN: Well, the basics are crystal clear, as I’ve written for many, many years since the 80’s. There’s no dispute among people really focused on these questions that more CO2, more greenhouse gases, warmer world; warmer world, less ice; less ice, higher seas – this has been a mantra on Dot Earth and in my writing for years. But that doesn’t mean that there aren’t real disputes about certain aspects of this: health impacts, the pace of sea level rise, what hurricanes are going to do, the science has actually become more complicated. And there are some people who are so driven to get a piece of legislation through, or to seal the deal as the mantra was this past year on the treaty, that any talk of nuance or complexity is seen as a betrayal of some kind.

YOUNG: How was it covering Copenhagen as sort of the, uhhh, climax of your career at the Times there? Did it seem like a fitting way to go out?

REVKIN: There are some who would say, why are you getting out of journalism, or at least formal staff job at the newspaper right at this point when global warming has become such a momentous issue? And there’s been this impression periodically with global warming that this is the year. The last time was the late 80’s running up to the framework convention in 1992, then we had Kyoto the moment, and now we have Copenhagen the moment morphing into Mexico City the moment.

And having covered the human influence on climate since the mid-1980’s I had the privilege and the horror of getting a more realistic view of how this issue relates to the grander trends that are underway in human history right now. And that leads to very clear understanding the more you look at the moment that this is not a moment, that it’s a journey. You know, our relationship to energy is not going to be solved or transformed by any one president, any one administration, any one Congress, any one conclave in one capital or another. It’s an evolving process.

YOUNG: The time span of your time at the Times covers this period of great change in how climate change was perceived as an issue. It also covers a time period when we’ve had nothing short of a revolution in communications and journalism. How do those two things converge? How is the story of climate change being told and how is that changing?

REVKIN: Well, my sense is it’s amplified the edges of the discourse, in a way that’s not productive. What I try to do on Dot Earth is not – it’s not really a blog it’s interrogatory reportorial exercise where I’m asking questions, I’m laying out what I know. I’m not saying what to do and I’m not telling you what to think. But most of what you hear out there is at the edges. Catastrophe, hoax, catastrophe, hoax, and that for many people I think is not a useful way to get at this.

Even in deciding to leave the Times one of the downsides is abandoning to some extent that arena that’s kind of like the town plaza for ideas, which is the front page of a newspaper, or the homepage, increasingly. And this social networking media, Twitter, which I do a lot, I think also you’re kind of relying on your pre-orchestrated set of friends and contacts to shape what you’re – how you’re viewing stuff happening in the world, and that, too can be a potential problem.

But, cutting against that is that the old style of journalism, the old 20th century model, which was epitomized by someone who was hero of mine as a kid, Walter Cronkite – you know, ‘that’s the way it is’. You know, where you’re essentially given comfort food, sort of the intellectual equivalent of mac and cheese was the old nightly news cast where you got this comforting sense of that’s the way the world is, we all absorbed it communally. Now, it’s clear when you look at the problems that the world faces right now: economic, conflict and terrorism, and climate it’s a complicated – there aren’t easy answers. And anyone who’s telling you that’s the way it is, if they’re not including caveats, then they’re not really being true to the times.

REVKIN: Climate change is not the story of our times. It’s a subset; it’s a symptom of the underlying growth spurt that we’re on as a species. And from many stand points this seems to be a unique juncture in our history.

I was amused at a conference I went to earlier this year. A historian talked about cronocentricism; he said, you know, every generation feels it’s special, that the things you experience that there’s something momentous about your time. And then he said, but guess what? This really is unique; in our history as a species we were always local, you would cut down your forest, you would pollute your river, you would fish out some pond of its fish, and now we’ve truly gone global and also at the same time we’ve become aware of it – science, the gifts of science. And awareness comes with responsibility.

It’s kind of like going through puberty, but at the level of a species. We’re at that juncture between the teen years where you didn’t really have to think much, you know, you just do little binges and not really think of the consequences. And now scientists are like the grownups in the room saying, hey, you know, if you keep this up, young man, you’re gonna hit a wall or go fly off a curb. And so as a species, as a community, a global community increasingly we’re facing this – this ugly reality that we’ve got to kind of grow up, and that’s the adventure and fun story of our time.

YOUNG: Andy Revkin leaving The New York Times but not leaving the realm of climate coverage, we’ll be hearing from you again, I’m sure. Thanks a lot for your time.


Listen to an extended version of Jeff Young’s interview with Andrew Revkin.

For a critical view of Revkin’s climate coverage, check out the blog Climate Progress.