Ghost of the Mountain 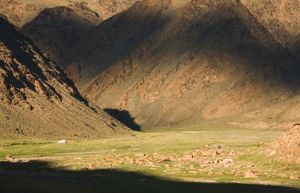 The stark mountains and landscape of Mongolia. (Photo: Nic Bishop ©)

Author Sy Montgomery’s latest adventure took her to Mongolia to join a scientific expedition tracking snow leopards. Sy chronicles the search in her new children’s book called “Saving the Ghost of the Mountain: An Expedition Among Snow Leopards in Mongolia.” As she tells host Steve Curwood, the elusive cat is seldom seen but that doesn’t mean the snow leopard doesn’t leave any traces.

YOUNG: Author Sy Montgomery’s interest in the natural world has taken her to the Amazon to swim with pink dolphins, and to Cambodia in search of the golden moon bear. Her latest adventure was in Mongolia. There she joined a scientist to track one of the most elusive cats: the snow leopard. Sy Montgomery sat down with Living on Earth’s Steve Curwood to talk about her new children’s book based on that trip, “Saving the Ghost of the Mountain: An Expedition Among Snow Leopards in Mongolia.”

“Saving the Ghost of the Mountain: An Expedition Among Snow Leopards in Mongolia” by Sy Montgomery. (Photo: Nic Bishop. Reprinted by permission of Houghton Mifflin Harcourt Books for Children. All rights reserved.)

CURWOOD: The story of “Saving the Ghost of the Mountain: An Expedition Among Snow Leopards in Mongolia” starts with you and your photographer partner, Nick Bishop – you’ve done a number of books together. What gives you the idea that you want to go looking for snow leopards?

MONTGOMERY: Boy, well here was this extremely elusive cat – they call it “the ghost of the mountain” because it seems to have these supernatural powers. I mean here is this creature that no one ever sees, but it’s able to live in the most extreme habitat in the world at heights that make it so difficult to breathe. Humans really can’t go to the upper limits of the snow leopard’s territory.

They live in temperatures so cold that your tears will freeze on your face and your eyes. And they can become invisible right in front of your eyes. I couldn’t resist this. And I felt like, what a great expedition to take kids on. What we were trying to do was count snow leopards without seeing them. This is a big problem, as you know, in biology – trying to figure out how many of something there is.

And most of the time you’re not going to be able to count every individual, of course not. Sometimes, they’re just too numerous to count. In this case, this is a critically endangered animal and knowing about how many there are and whether the population is rising or falling is absolutely crucial. So this expedition was to try to find out how many of them there are without being able to see them.

CURWOOD: So, tell me about the scientists that you went with on this expedition because I don’t think tour agencies take you looking for the snow leopard.

MONTGOMERY: No, they don’t. Tom McCarthy is the scientific director of the Snow Leopard Trust – his story is an interesting and inspiring one for kids because when he was growing up at first no one expected him to go to college or anything like that; he was one of the first in his family to go to college.

The van used to transport the team and their equipment throughout the expedition. (Photo: Nic Bishop ©)

He wasn’t crazy about studying stuff until he found his passion, which was animals. He loved National Geographic; he loved being in the wild. And he was working in this sawmill, and he just decided to go back to school and get a graduate degree. And was working in Alaska studying bears when he had this opportunity to go to Mongolia. He jumped at the chance to study something that no one else had studied before.

CURWOOD: And so, off he goes and he gets to see some snow leopards, but I guess not terribly often, huh?

And it’s hard to catch these animals. When you catch them might be the last time you see them because even though you’ve got radio telemetry to track them – you know, the collar that sends a special signal that you can pick up and follow. Most of the time, he’d capture these animals and not see them for years or at all.

The stark mountains and landscape of Mongolia. (Photo: Nic Bishop ©)

Tom and a colleague were perched on a ledge with an excellent view of the treeless, barren landscape below and they were getting a strong, strong signal from one of the snow leopards that they had collared months before. And he was thrilled because you hardly ever get a signal that strong that shows it’s that close. Most of the time you just kind of know the vicinity it is. But they thought, this time, we’re going to see the cat!

So the two of them are perched on this ledge, one has binoculars, the other has a spotting scope, and from the way that the signal was coming in they know the animal is right in front of them. So, they put the scope up to their faces and the binoculars up to their faces they can’t see it. Well, the signals coming in showing that now it’s moving, it’s moving right in front of them.

Sometimes it’s hard to see an animal like this when it’s still, but when it’s moving you want to be able to see it. They’re looking through their scopes, their binoculars – they can’t see a thing. So, beep, beep, beep – they’re following the sound and they see from the sound the animal’s turning a corner and now it vanishes. And they never saw it. So, they think, how could this be?

Sometimes what happens is you get an echo. It’s a phenomenon that actually the signal is coming from somewhere else and it’s bouncing off your mountain, so they decided to descend to the valley where the animal had been, where they thought the animal had been and try to find some tracks. And they go down there, and there’s the tracks. And there’s a great, big, fresh poop sitting right there!

CURWOOD: Now, Sy, I thought you might say that one reason why the kids are so interested in this particular story is that it has something that interests kids of really all ages: poop. 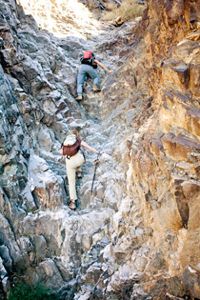 Sy Montgomery on one of the grueling climbs through the mountains in Mongolia. (Photo: Nic Bishop ©)

CURWOOD: You gather all this poop; you bring it back for analysis, that’s rather expensive. But then, in your book you say there’s a low cost way to this.

MONTGOMERY: Oh, yes. And this is something – this is pretty fabulous. This also might involve labs, but labs of different kind. Instead of laboratory, Labrador. Dogs, as you know, are extremely interested in poop and know a lot about it. And you can easily get a dog to recognize snow leopard poop versus wolf poop. I mean, they know this anyway, if you walk with your dog anywhere they’re looking, you know, like we check email, they’re checking “pee-mail” and “poop-mail”, and they know whose been where and how long ago, and they spend a long time thinking about this. So, it’s very easy to get your dog to tell you what it knows, you just have to train it in a way that you know what it’s trying to tell you. And so, they’re using these dogs to help them identify whose poop is whose.

CURWOOD: Much cheaper way to screen for snow leopards.

MONTGOMERY: That’s right, absolutely. You don’t have to do all the fancy spinning down of the DNA analysis. And when you compare it with the laboratory results, the dogs are extremely accurate.

The ger, or yurt, the group assembled at each rest stop during their adventure. (Photo: Nic Bishop ©)

CURWOOD: So, in today’s world where a kid can sit down in front of a television and, in a half an hour on some naturalistic channel, can see cats in the wild take down an antelope, have a bunch of cubs, and such. These kids are willing to go through a book where actually at the end of the story you never get to see a snow leopard?

MONTGOMERY: Yes. That’s the way science really is. One reason that these books I think are important to write and get into kids’ hands – they want to see the grueling adventure, they want to go along, and for them it’s enough to have collected the scat that might turn out to be snow leopard, or might not.

For them, I think they find the adventure and the mystery, that’s all part of it – that’s real life, that’s real science. And sometimes it’s frustrating and sometimes it’s thrilling, but the great thing is the adventure continues, it keeps going on. Like loving somebody. And by the end of this book I hope that they love snow leopards enough to stay with that adventure and keep caring about these animals forever, even though they may never get to see one in the wild.

CURWOOD: Sy Montgomery’s new book is called “Saving the Ghost of the Mountain: An Expedition Among Snow Leopards in Mongolia”. She wrote the text, the pictures by her professional partner, Nick Bishop. Sy, thanks for taking the time to come by.

MONTGOMERY: What a pleasure, Steve. Thank you.


Read excerpts from Sy’s Field Diary from her Mongolian Expedition.