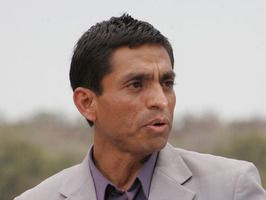 Reporter and host Jose "Pepe" Galindo of Radio Universidad focused much of his work on the environment.

In Mexico, hundreds of people are murdered every year for simply calling things the way they see them. So much is lost when these voices are silenced. Living on Earth's Ingrid Lobet pays tribute to two recently murdered men.

YOUNG: Mexico is suffering an epidemic of violence, much of it related to the drug trade but some directed at those who work to protect the environment. Marcos Armendariz was a small town lawyer. Pepe Galindo was a journalist who covered the environment. They're just two of hundreds of dedicated professionals assassinated in Mexico in recent months. Living On Earth's Ingrid Lobet crossed paths with both these men and takes a moment to reflect on their loss and what it means for Mexico.

LOBET: When I visited the legal office of Marco Antonio Armendariz several months ago, I was struck by how humble it was. Key phone numbers scrawled on the side of a green file cabinet. A torn swivel chair. What Marcos felt confident he did have was a body of good law, Mexican law, and armed with it he was unafraid to go up against anyone in court. One case involved a small-town mayor, who was incensed at not receiving a customary bribe.

VOICEOVER: I don't know, I imagine in the United States it's different. But here mayors have extraordinary powers.

LOBET: The mayor was making life difficult for a group of women Marcos was representing. They'd started their own electronics recycling business. The mayor refused to give the okay for the power company to turn the lights on in their plant.

VOICEOVER: The mayor made them feel like he was police, judge and jury. He was sitting there like some cacique, like some duke from back in the Mexican Revolution. 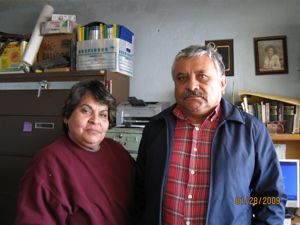 Marco Antonio Armendariz, legal advocate, in the office where he was murdered. With him is Vicki Ponce, one of many clients he represented pro bono. (Photo: Ingrid Lobet)

LOBET: Marcos operated with a calm demeanor, but he wished for nothing less than a transformation in his country. He passionately wanted to live in a Mexico where honest dealings are rewarded and he wanted to be part of making that happen.

VOICEOVER: What we're trying to do is put in our little grain of sand to fix Mexico.
We want to instill the idea of no bribes. Mexico, right now, is going nowhere. Bribery is everywhere. They say it's a tradition here, nearly the law, that it's always been that way. No, no, no! If we want to progress in Mexico, we have to go sweeping away all that rubble.

LOBET: Reached by phone on his remote sheep ranch south of the border, Roberto Valenzuela described his friend.

VALENZUELA: He liked taking on big challenges, you know, challenges that nobody else wanted to do. He's left a big vacuum. We still can't believe that he's gone. He's irreplaceable.

LOBET: Marcos was working on a project, a dream, though he described it without saying the word "I". He wanted to create a free legal clinic in the small border town of Agua Prieta.

VOICEOVER: We'd like to form some kind of an office of free attorneys advocating for the rights of children, of women and family. And also property, so they don't take away people's property. And I'm not saying we would never charge, but if a person who is poor comes in, how are you going to charge them? You just represent them, that's all.

LOBET: On October 24th, 2009, Marcos was shot four times, sitting in that office chair, at extremely close range. There are no suspects and the ballistics investigation hasn't even concluded. Marcos' two grown daughters, one an attorney and one in law school, still want to open that legal clinic, somehow.

He also left behind a much younger, disabled daughter he was caring for. Farther south in the country, Jose Galindo Robles, who was known as Pepe, was a journalist with a fierce interest in environmental issues. He had recently received a master’s degree in environmental science and was a station director for the respected Radio Universidad outside Guadalajara. I met Pepe after he had finished a documentary about the contamination of one of Mexico's most important river systems, the Rio Lerma-Santiago.

VOICEOVER: The environmental situation is alarming, not only the water pollution but there are secret chemical burial grounds here, and not far from the groundwater:
Ruben de Ireyo is a chemical engineer who used to work at one of the cyanide burial companies:

VOICEOVER: It scares me to say this but it's true. These burial pits are on the companies' private property. They have dug these pits in their backyards to bury – to cover up – their crime. They buried 2,600 kilos a day for 28 years.

LOBET: The documentary won national recognition in Mexico in 2004. That same year Pepe was one of a small group of reporters who formed the Mexican Network of Environment Journalists. Here's another clip from that river report.

VOICEOVER: The river is sometimes covered with foam; it can reach 60 feet high. The foam forms pillows and they float through the air. People who cross the bridge over the river do it running.

VOICEOVER: People cross the bridge and be careful that the foam doesn't land on you! It hurts your skin. It damages the paint on your car. It's really something.

LOBET: Radio was Pepe's life, says his colleague Dr. Soraya Santana, a psychology professor at the University of Guadalajara.

VOICEOVER: He always impressed on us the importance of this being a public University, that we owed our work to the people of the city, and that we needed to take our cues from the needs of the people, not from our own ideas of what constitutes "culture".

Reporter and host Jose "Pepe" Galindo of Radio Universidad focused much of his work on the environment.

LOBET: Pepe Galindo hosted a nightly radio program and a weekly TV news show. He had recently survived leukemia. Yet, he was still trying to get more environmental news on the air, proposing new collaborations shortly before he died. Jose Galindo Robles' body was found bound and beaten in his home on November 24th. No one has yet been arrested. Marcos Armendariz and Pepe Galindo were only two of the hundreds of powerful voices that have been silenced in Mexico recently, leaving so many labors unfinished. For Living on Earth, I'm Ingrid Lobet.

[MUSIC: Lobet: E.S.T. “All The Beauty That She Left Behind” from Viaticum Platinum Edition (ACT Music 2005)]

Knight Center for Journalism in the Americas