Chilling Out in Copenhagen

The Little Mermaid presides over Copenhagen harbor, which will provide the cold water for the city's new district cooling plant.

Copenhagen will soon be using a very cool technology to ensure there's nothing rotten in Denmark. The first phase of its new district cooling system will soon be up, running and cooling the capitol city. Living on Earth's Bruce Gellerman takes a tour and learns that not only will it dramatically cut CO2 emissions and energy...at times, it'll be free.

YOUNG: From Ice – to a cool idea from Copenhagen. As global warming heats up the planet, the city-owned utility plans to cool the Danish capital using an updated version of a century old technology.

The first phase of the new system is scheduled to be up and running by early spring, and supporters say it will be ecologically and economically friendly. Not only will it enable Copenhagen to dramatically cut the use of air conditioning and reduce emissions of greenhouse gases, at times, it will cool-off the city for free. Living on Earth Senior Correspondent Bruce Gellerman has our report.

GELLERMAN: It’s a crisp, cold evening in central Copenhagen, and engineer Jan Hoge says even on a winter day like this the city has a problem keeping computers and servers in downtown office buildings from overheating.

HOGE: It’s snowing now. It’s minus one or two degrees Celsius but still there’s a need for cooling here. And this is for server installations around the city, that’s amazing. Outside minus two and still a cooling demand.

GELLERMAN: That’s because of all electronics.

GELLERMAN: These days half the energy Copenhagen uses for air conditioning goes to dissipate heat from rooms filled with computer servers. 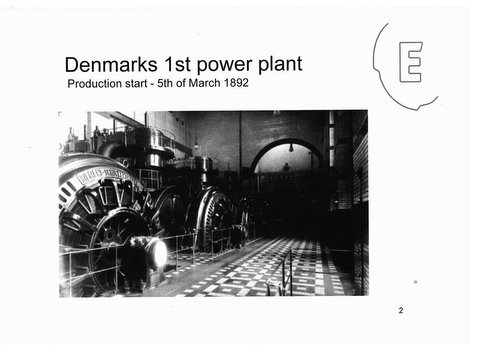 Looking for an environmentally friendly and profitable alternative to air conditioning, Jan Hoge didn’t have to go far from Copenhagen’s city center to the site of Denmark’s first electric generating plant, built in 1892.

HOGE: Here you can see we’re in an old power plant. This is the old chimney from the power plant.

GELLERMAN: So they weren’t using this power plant for anything, or it was being used? 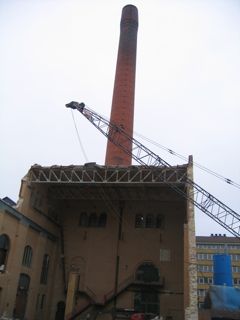 HOGE: It has been used. We have fired coal in here, and then after that it was oil for a period, and then due to environmental reasons – and it was also too small – then they stopped production here in the 70s, and since then it has been used for nothing you can say. So now we can say we use some of the old installations for a new purpose, so we think that’s a good idea.

GELLERMAN: But instead of generating electricity, Copenhagen’s old power plant is being converted to produce district cooling, or as Jan Hoge says in Danish:

HOGE: Fjern koling…there you are. [Laughs]

HOGE: Fjern koling, perfect – you got it! [Laughs] 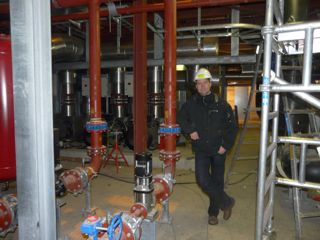 Jan Hoge leans on the pipes that return warm water back into the system. (Photo: Bruce Gellerman)

GELLERMAN: Jan Hoge has the can-do spirit needed to make sure Copenhagen gets its first district cooling system up, running, and chilling downtown office buildings in a few months. Just as district heat has been keeping Copenhageners warm by capturing and distributing excess heat from generating plants, soon companies will be able to connect to a centralized source for cooling:

HOGE: By introducing district cooling we can produce cooling with heat. Sounds crazy but it’s an old technology. Yeah, It works.

GELLERMAN: We put on hardhats and head inside the old power plant where workers are putting the finishing touches on the district cooling system.

HOGE: As you can see this is a construction site so we’ll have people working here. But the machine here on your left side is an absorption chiller – basically this is only a container; there’s not much technology inside this one.

GELLERMAN: This is really low tech! This is a plumbing job.

HOGE: This is low tech. It’s really simple. It just has to be tight, and a lot of iron. [Laughs]

GELLERMAN: The key to Copenhagen’s district cooling system and what makes it special is that it’s flexible. The plant will use two kinds of absorption chillers. Some are the old tried and true technology that chemically converts waste heat produced by the city’s coal and gas powered plants, and some chillers use electricity. 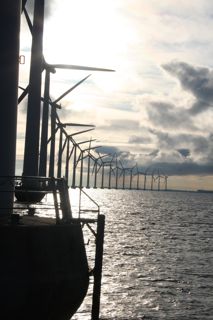 Since Denmark gets a fifth of its electricity from wind power – the largest percentage of any country in the world – when it’s really blowing it can drive the cost of running the district cooling system way down.

HOGE: This might sound a little bit strange but in Denmark we have periods where the electricity is not only zero, it will turn into a price of minus, which means you gain money using electricity – it sounds crazy. So I mean, this is interesting, yes?

GELLERMAN: But what’s really interesting and unique to district cooling Copenhagen style can be found in the basement of the refurbished power plant.

HOGE: If we didn’t have these pipes we didn’t have this project because it would be so expensive for us to put in new pipes in the ground. And although they’re more than a hundred years old they look fantastic. We just have to reline them and now we use the seawater from the harbor to cool down our chiller units, and through the so-called free cooling. And what is free cooling? You produce cold water purely from the water in the harbor.

GELLERMAN: In the winter the carbon footprint from Copenhagen’s district cooling system will be virtually zero. Over the year, CO2 emission will be nearly 70 percent less than traditional air conditioning units and energy costs will be cut 80 percent. And because it’s largely automated, Jan Hoge says the plant will require just one person working eight hours a week to change filters. 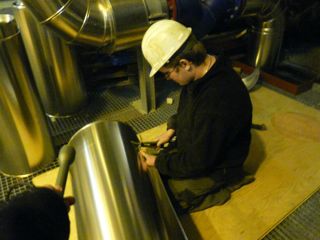 GELLERMAN: The first phase of Copenhagen’s new centralized system will start cooling down the city center by April. Delivering the big chill to the entire metropolitan area will take 15 years and cost a cool 400 million dollars. For Living on Earth. I’m Bruce Gellerman in Copenhagen, Denmark.