President Obama has big plans for the future of commercial nuclear energy but the industry still has to deal with the waste it’s generated over the past 50 years. The administration has pulled the plug on the Yucca Mountain repository so, today, half a century of radioactive waste remains at power plants. That's costing taxpayers and ratepayers billions of dollars a year. Living on Earth's Bruce Gellerman investigates the flow of federal funds and nuclear waste in the second story in our series.

YOUNG: You might call it a money meltdown. For decades the federal government promised to permanently bury that high-level nuclear waste in the Yucca Mountain Repository in Nevada. And utility consumers paid the government billions of dollars to do that. But the Obama administration wants to pull the plug on Yucca Mountain – while at the same time promising 54 billion dollars in federal loan guarantees to build new reactors. That means nuclear utility companies have to continue to store the spent fuel rods on site – often in pools of water and increasingly in special dry casks.

Living on Earth’s senior correspondent Bruce Gellerman has been following the flow of the waste and following the money. His story starts in Haddam, Connecticut.

GELLERMAN: Elizabeth Malloy was born and raised in the historic town.

MALLOY: Well, we’re in Haddam Meadow State Park right now and you can see what attracted the first settlers to Haddam, this beautiful open space floodplain here that provided great areas to grow hay and crops and things like that, as well as you’re right on the Connecticut River here.

[SOUNDS OF WIND AND WATER]

GELLERMAN: At Haddam Neck, where the Connecticut converges with the Salmon River, there are sites from the town’s prehistoric past: homes from its rich colonial heritage and remnants of a nuclear power plant whose final chapter has yet to be written.

Elizabeth Malloy is executive director of the Haddam Historical Society. She’s keeper of records, and preserver of memories, like this one circa 1966 when this small town entered the atomic era piece-by-piece.

GELLERMAN: Then came the even larger nuclear reactor, and later the shipments of the one thousand nineteen enriched uranium fuel rods that would power the plant. In the basement of the historic society, Elizabeth Malloy pulls out plastic toy windmills, a comic book and a wood ruler – freebies students got on field trips to the Connecticut Yankee nuclear power plant. And on a dusty shelf, old metal canisters. 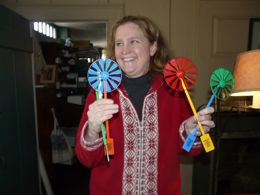 [SOUNDS OF MOVING OBJECTS ON SHELF]

MALLOY: And the other thing we got were these movies. January 12, 1966, produced for the Connecticut Yankee Atomic Powerplant. I love the title, “The Atom, A-T-O-M, and Eve.” The other movie we have is called, “The Mighty Atom” starring Reddy Kilowatt. And he was a little kilowatt cartoon character, and the atom would come to life and tell us all the wonderful attributes of nuclear power.

MALLOY: It was interesting. I think probably every middle school in lower Connecticut probably went there at one time or another.

GELLERMAN: But today, the Connecticut Yankee site is off limits. It’s fenced off and guarded 24/7. In 1996, after the reactor core lost cooling water, the plant was shut down for good, just 28 years into its 40-year license to operate. 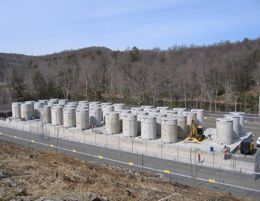 t took a decade to decontaminate the area. The discovery of radioactivity underneath the plant doubled the cost to decommission the site, soil and surroundings. Yankee utility ratepayers footed the 870 million dollar bill.

[SOUNDS OF DRIVING IN CAR]

MALLOY: And directly across the way here you can see the parking lot of Connecticut Yankee. And you can see the old wires that would come down the dome. And the full facility was located directly straight ahead where those wires are, where that tower is.

GELLERMAN: So the plant was right here?

GELLERMAN: What does remain of what was once the Connecticut Yankee nuclear power plant is hidden from view in 43 huge dry storage casks lined up in rows, like a modern Stonehenge. The casks – 20 feet high, and 11 feet in diameter – are made of concrete and stainless steel. Each weighs a hundred tons. They contain all of the spent nuclear fuel assembly rods ever used at the plant. Historian Elizabeth Malloy says in 1987 the federal government promised Haddam it would haul the dry casks away to a permanent repository in Nevada.

MALLOY: When this storage facility was built we were told that it would remain there until Yucca Mountain was open, which if you talked to one person it was going to be a matter of a few years. If you talked to other people it might be a decade or so. And if you were to talk to probably realists it was never going to happen.

GELLERMAN: And so far, it hasn’t. There are more than 60 dry cask Stonehenges, containing high-level nuclear waste, in 33 states. When Nevada said, “Not in my back yard,” communities like Haddam, Connecticut wound up keeping the radioactive waste in theirs. Technically, the cask sites are called Independent Spent Fuel Storage Installations. At some, the nuclear plants are long gone and decommissioned. But the radioactive waste they produced – some with half lives in the tens of thousands of years – remain, orphaned, in what was supposed to be interim storage.

GELLERMAN: If you had a question for the owners of Connecticut Yankee, what would you ask them now in terms of the waste? 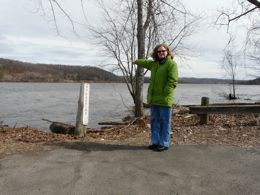 Elizabeth Malloy stands along the Connecticut River across from Haddam Neck where the nuclear power plant once stood. (Photo: Bruce Gellerman)

MALLOY: Well, I think I would ask them what is the plan for the dry cask storage. I mean, how long is it going to be there? And they’ll probably tell me they don’t know. It’s in the federal government’s hands. It’s always passing the buck I think to somebody else.

GELLERMAN: But you pay the bucks.

MALLOY: I do pay the bucks, but I’m just one person.

GELLERMAN: Today, we all pay to temporarily store commercial nuclear power waste but it wasn’t supposed to be that way. Connecticut Yankee produced 110 billion kilowatt hours of electricity. Under the terms of the federal Nuclear Waste Fund established in 1983, consumers of the energy paid a tenth of a cent per kilowatt-hour for the removal and permanent storage of the nuclear waste. Bob Capstick, a spokesman for Connecticut Yankee says the pennies have added up.

CAPSTICK: Right now I believe they collect somewhere on the order of 750 to 850 million dollars a year from the operating plants.

GELLERMAN: And that doesn’t include interest. Over the years, the federal Nuclear Waste Fund has collected more than 30 billion dollars. About 10 billion went to study Yucca Mountain; the rest went into the government coffers and now exists as an I-O-U to be reimbursed by future taxpayers.

Because Connecticut Yankee was decommissioned, it no longer pays into the federal waste fund. Today, the company only exists to maintain and monitor the dry casks storage installation. It costs eight million dollars a year and Bob Capstick says that money has to come from someplace and that someplace is once again: ratepayers.

CAPSTICK: In effect, they’ve kind of been forced to pay twice because of the failure of the federal government to come and take the fuel in 1998 to begin removing it from the site, we had to build this dry cask storage facility, and each year that we continue to have to safely protect and monitor this spent fuel for the federal government it costs the ratepayers money, as well. And so we’ve gone into court and we’ve sued the federal government for its failure to meet its obligation.

GELLERMAN: So far, Yankee has been awarded 140 million dollars in damages, and has more suits pending. So do other nuclear energy companies. In fact, there have been 60 suits against the federal government for failing to take the spent fuel as required by law. Power plant operators have won all of them. Seven billion dollars has been paid out and that money comes, not from the Nuclear Waste Fund collected from ratepayers, but the federal treasury – taxpayers.

And now Steve Kraft from the Nuclear Energy Institute says, enough is enough. The trade group wants the Department of Energy to stop collecting the one tenth of a penny per kilowatt-hour that continues to flow into the Nuclear Waste Fund.

KRAFT: If things continue the way they are, the rate payer will continue to pay and get no services because they’re shutting down the Yucca Mountain project which was the only thing that program was currently paying for.

GELLERMAN: And a growing number of state officials agree with the Nuclear Energy Institute.

WHITE: In my view, this is more than just a legal obligation. This is a moral obligation. At some point in time, the customers of the nuclear utilities in this country need to get some kind of return.

GELLERMAN: White wants the Department of Energy to live up to the contracts it signed 27 years ago and haul away what now amounts to more than half a century of nuclear waste.

The Department of Energy wouldn’t provide an official to comment for this story but the Obama administration has put together a blue ribbon commission to study the waste issue. Their report is due in two years. In the meantime, the nation’s 104 operating nuclear power plants continue to produce four and a half million pounds of high-level radioactive waste a year.

[SOUNDS OF WIND AND WATER]

GELLERMAN: And in scores of places like along the shore of Haddam, Connecticut, behind high-security fences and sensors, huge storage casks made of cement and stainless steel stand – silent, unseen and largely out of mind – testimony to a nuclear era long gone but by no means over. For Living on Earth, I’m Bruce Gellerman.

[MUSIC: Medeski, Martin And Wood “Baby Let Me Take You Down” from Radiolarians II (Indirecto 2009)]


For more on nuclear waste, listen to the first part of this series.

Click here for more about the town of Haddam.