Three Men and a Bike

Bicycles burn calories, not carbon, so they’re considered among the cleanest forms of transportation. But most bikes are made of aluminum and steel which leave a large carbon footprint since the materials are mined and processed. Now a group of young men have come up with a clean, renewable replacement: bikes made of bamboo. Living on Earth’s Jessica Ilyse Smith went to the Bamboo Bike Studio in Brooklyn, New York and has our story.

YOUNG: It’s Living on Earth, I’m Jeff Young. And when it comes to clean, inexpensive and healthy transportation, bikes are hard to beat. But since they’re typically made of steel or aluminum, which go through a lot of processing, bicycles can still carry a sizeable carbon pedal print. In Brooklyn, NY, three men are taking an ecological approach to building bikes. We sent Living on Earth’s Jessica Ilyse Smith to give it a spin.

[SOUNDS OF RIDING ON COBBLESTONE]

SMITH: Rickety, jolting, awkward, riding a steel bike on a cobblestone road is a tricky balancing act. I huff and puff alongside Sean Murray, who moves with ease on his bike made of bamboo.

MURRAY: One of the nice things about the bamboo frames is that they drink up all of the vibrations in the road. So right now I’m not sharing your suffering.

SMITH: [Laughing] Why is that?

MURRAY: It’s because the bamboo itself is a composite material and it’s got these really strong fibers that are as rigid as steel. Those fibers are set in a matrix of very soft and supple bone, so you can ride over cobblestones like these and not really feel it.

SMITH: Bamboo bikes are Sean’s specialty. For almost two years he’s been working along with two friends at their Bamboo Bike Studio in Brooklyn.

[SOUNDS OF CARS PASSING ON COBBLESTONE]

MURRAY: Always crazy traffic…go up and make a right.

SMITH: On the way to the studio, Sean’s bike draws a lot of attention. Heads turn as we come upon a blocked street where a commercial is being filmed.

MAN: Your bike’s made out of bamboo? 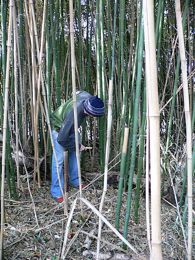 SMITH: A crewmember notices how light the bike is – weighing a mere 4-6 pounds.

[SOUNDS OF OPENING THE STUDIO DOOR]

SMITH: The one-room bike studio has high ceilings, little heat and unfinished walls. On the right bamboo frames in progress are mounted at workstations. To the left floor-to-ceiling shelves are filled with different types of bamboo.

MURRAY: This is our bamboo, which comes from the tri-state area. This piece right here is from Staten Island. This retired firefighter gave us a call and then me and him chopped it down in his backyard.

SMITH: Bamboo grows quickly and is invasive, so there’s no shortage of the plant – even in the urban northeast. The team constantly fields calls from homeowners offering up backyard bamboo. Justin Aguinaldo designs the sleek bamboo bike frames. He uses special tools like a Japanese pull saw – a thin blade that resembles an icing spatula.

AGUINALDO: Bamboo has a really tough silica outer coating and it dulls blades really fast. And if you use a regular saw it’ll also be more prone to splitting. 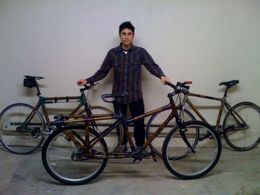 SMITH: Justin hands me the saw and the bamboo and he and Sean nod at me expectantly.

SMITH: I’m surprised at how easy it is to cut the bamboo. Sean says it’s because the plant has been treated.

MURRAY: After we harvest the bamboo then we do a treatment process that strengthens it and takes it from a dead plant into something that you can build a bike out of.

SMITH: The bamboo is heated until it’s dried, which reduces the chance of infestation and rot. No chemicals are used; it’s heat that turns the fresh green bamboo to a baked golden brown. The team won’t disclose the specifics of the process while they’re still perfecting the technique. But, Justin says it’s sustainable.

AGUINALDO: It doesn’t take a lot of energy, which is really nice because not only does it conserve energy but it also makes it feasible for someone in a developing country or a non-industrialized country to actually build this bike on their own.

SMITH: That’s the major goal of this project. The Bamboo Bike Studio has paired with Columbia University’s Earth Institute to bring their technology to Ghana.

AGUINALDO: We’re trying to work with the tools they would have to work with and figure out a way to do it so that it’s scalable, so that it’s doable, you know is it possible for a human being with their own two hands and a few tools to actually do this. 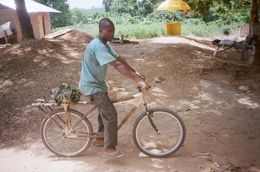 SMITH: For Ghanaians, and others in the developing world, bikes are a good form of low-cost transportation. Marty Odlin is the third member of the bamboo bike team. He recently returned from Ghana and says bikes can give people access to jobs, food, and hospitals.

ODLIN: I had a lot of people tell me what a difference it would make for them to have a bike.

SMITH: He looks forward to not only providing people with transportation, but also to creating bikes that are inexpensive and produced locally.

ODLIN: An average steel bike shipped in from China is roughly 100 dollars and in a large-scale factory we project that we’ll be able to sell these at a profit for about 50 dollars a bike. 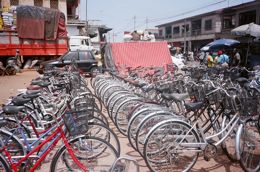 SMITH: This reduction in cost could make a difference in Ghana, where the average per capita income is barely over 700 dollars a year. There’s a lot of bamboo in the country and using local materials could help fuel a bike-building economy. But, to Justin there are other reasons why he uses bamboo.

SMITH: He says treated bamboo is as strong as steel and will hold up better on unpaved roads common in developing countries. On weekends, Sean, Justin and Marty run workshops in New York to teach others how to build their own bamboo bikes. 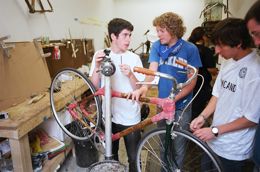 The classes aren’t cheap – they’re over 900 dollars but the proceeds support research on how to build strong and easy-to-make bikes in developing countries. Students at the workshops learn more than just bike craftsmanship they also gain an awareness of the origin of materials.

MURRAY: Our tubes just grow out of the ground. So, just in the two days when you actually take the raw materials and put them together in such a way to make something as useful as a bicycle, it’s something that will then color the way that you look – not just at bicycles – but at every product.

SMITH: I leave the bamboo bike squad to get back to Manhattan.

SMITH: On the subway I look around me. After an afternoon with the Bamboo Bike Studio guys I can’t help but think about where the glass, the steel and plastic come from. And I wonder if they could be replaced with something more sustainable. Perhaps the transit system can start simply…bamboo seats anyone?

[SOUNDS OF TRAIN PULLING AWAY FROM STATION]


Click here for more about the Bamboo Bike Studio.