Before becoming an award-winning filmmaker, Frank Capra aspired to be a chemical engineer.

Frank Capra is best known for the movies "It's a Wonderful Life" and “Mr. Smith Goes to Washington,” but he also made films about global warming and solar energy more than 50 years ago. Capra's interest in science comes to life in "The Unchained Goddess," as well as the 1938 film "You Can't Take it With You." Frank Capra biographer Joseph McBride talks with host Jeff Young about Capra's frustrated scientific ambitions.

YOUNG: Sure, you saw Al Gore’s “An Inconvenient Truth.” But did you know Hollywood was already warning us about climate change almost 50 years before that?

["THE UNCHAINED GODDESS" FILM CLIP: Due to our release from factories and automobiles every year of more than six billion tons of carbon dioxide, which helps air absorb heat from the sun, our atmosphere seems to be getting warmer. And this is bad? Well, it’s been calculated a few degrees rise in the earth’s temperature would melt the polar ice caps!

YOUNG: That film “The Unchained Goddess” was released in 1958. And it was produced by a Hollywood legend – Frank Capra, the man who gave us “It’s a Wonderful Life”. A clip from Capra’s remarkable climate change film has been making the rounds on the Internet. We asked Capra biographer Joseph McBride how Capra got involved in climate science – and it’s an interesting story. Mr. McBride, welcome to Living on Earth.

MCBRIDE: Hi Jeff, thanks for having me.

YOUNG: Now, you wrote a book where you had extensive access to Frank Capra. What’s behind this – I’ve got to say eerily prescient film “The Unchained Goddess” about climate change.

A clip from Frank Capra’s “The Unchained Goddess”

MCBRIDE: Well, Capra was, he had a very good scientific training and wanted to be a chemical engineer originally, and went to what is now Cal Tech and was then called Throop Institute of Technology in Pasadena. But he ran into some academic problems and shifted his focus to motion picture. But he always had a fascination with science and kept up with the field, and told me late in life that he maybe wished he had stayed in that field.

MCBRIDE: Yeah, I think so. He was also kind of a frustrated educator. In the 1950s his career as a feature film director foundered partly due to the blacklist era – he was under suspicion because his films had been sort of liberal and had social criticism, so he retired to his ranch in Fallbrook, California as was lured back by AT&T to make science films for children, played first on television, then distributed to schools. And he had a lot of input from important scientists in these films. So they’re smart, and they hold up well scientifically.

YOUNG: Now, in "The Unchained Goddess," it’s remarkable that there’s this animation that shows south Florida underwater: little boats going in the water, and then the buildings under the water there.

["THE UNCHAINED GODDESS" FILM CLIP: Tourists in glass-bottomed boats would be viewing the drowned towers of Miami through 150 feet of tropical water.]

YOUNG: It’s a lot of fun, and it just seems so far ahead of its time, it really kind of blows your mind when you think this was made in 1958.

MCBRIDE: Well, one of the ironies is that Capra was a Republican, and a lot people think, mistakenly, that he was a liberal because his films are somewhat liberal in their orientation to some extent. But he was a lifelong conservative and that doesn’t stop him from being a good scientist and believing in climate change. Today, I think there’s this dichotomy between – you know, if you’re conservative you’re supposed to be antithetical to understanding climate change, which doesn’t make any sense. So you could say, it’s strange bedfellows, Frank Capra and Al Gore, but they’re more alike than Capra would probably like to admit.

["THE UNCHAINED GODDESS" FILM CLIP: Extremely dangerous questions, even now, man may be unwittingly changing the world’s climate through the waste products of his civilization. Not only dealing with forces of a far greater variety than even the atomic physicist encounters, but with life itself.]

MCBRIDE: Since he knew science unlike most filmmakers he understood deeper truths and future concerns. As far back as 1938 in his Oscar-winning film “You Can’t Take It With You,” Jimmy Stewart talks about solar energy, which is kind of astounding when you see that in 1938. And so, “Our Mr. Sun” is an early film advocating solar energy in 1956.

["OUR MR. SUN" FILM CLIP: Link the solar battery up! The recipe for this solar wafer sounds just like a vacation, just sand and sunshine. Exposure the wafer to sunlight, presto! The motor starts running with the efficiency of an automobile and nothing is used up but the sunshine, which is free! Ain’t that something? Well I’ll be darned!]

MCBRIDE: So, it filled the hole of the fact that he was creatively frustrated in the ‘50s when he was sort of a self-exile from Hollywood. It was a pleasure to be away from political pressure of making films about important, big issues – these were not considered important, big issues of the time. Ironically, now they are.

YOUNG: So what do you think Frank Capra might do in terms of the current climate change debate if he were with us today?

MCBRIDE: Well, I’m afraid since I know his M.O. that he would probably try to disassociate himself from “The Unchained Goddess” because he’d be on the wrong side of political spectrum. I’m saying that because, for example, during the Vietnam War, Capra gave a talk at a college in which he sort of disowned “Mr. Smith Goes to Washington” because he was highly critical of the American political system, which I think is kind of sad that he would sort of run away from the implications of his own films. But he was very traumatized by first, the reaction against “Mr. Smith” from some right-wing pundits and politicians, and then, the post-war backlash against liberal filmmaking, or left-wing filmmaking. So I think he’d be uncomfortable about being considered a man crying out in the wilderness that climate change is a problem.

YOUNG: You know, you got a lot of time to talk with him and it sounds like pretty personal conversations. What did he tell you about his early desire to follow science?

MCBRIDE: Well, I had a lot of very revealing conversations with him and he was very interesting to talk to, and we had a very good discussion, which I used to end my book, “Frank Capra: The Catastrophe of Success,” because I think it was so revealing. If you want me to I could read that discussion? 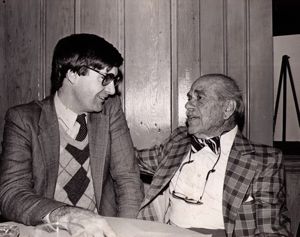 MCBRIDE: Well, I asked him if he thought he’d made the right choice to forsake his scientific ambitions for motion pictures, and he said, "not particularly." So, I said, "well, do you think you would have been happier in science?" He said, "yes." I said, "why?" He said, "I would have done more." I said, "where do you think you would have ended up?" He said, "with Dr. Hubble, Dr. Edwin Hubble as an astronomer – I could study the stars and the planets forever, I always wanted to know why, why!" "Then why didn’t you do it, what changed your mind?" "Pictures changed my mind, I was too far along in the movie business, but when I go to Cal Tech now and I hear things I’m not familiar with like black holes, damn, I get mad. How the hell I ever refused that, I don’t know. Whatever made me refuse it!"

So I think he believes scientists were doing more important things than motion picture directors.

YOUNG: You know, I want to go back to the 1938 film “You Can’t Take It With You.” And this moment where Jimmy Stewart’s character is talking about his enthusiasm for solar power – let’s hear just a bit of that:

["YOU CAN’T TAKE IT WITH YOU" FILM CLIP: I remember in college another guy and I had an idea – we wanted to find out what made the grass grow green because there’s a tiny little engine in the green of the grass and on the green of the trees that has the mysterious gift of being able to take energy from the rays of the sun and store it up. Well, we thought if we could find the secret of all those millions of little engines in this green stuff, we could make big ones, and then we could take all the power we could ever need right from the sun’s rays, you see?]

MCBRIDE: A fantastically well-acted scene. It goes on for actually four and a half minutes in one shot. So it’s very intimate and you get a real sense of the actors and – Capra and Robert Riskin, the screenwriter, had made a lot of changes in the play they had adapted there – “You Can’t Take It With You” – and they added that scene. And that was obviously very personal to Capra, Robert Riskin didn’t have a scientific background so I think we could safely ascribe that to Capra. And Jimmy Stewart is giving his talk about the potential of solar energy and then he expresses regret that he didn’t pursue it, so that definitely comes from Capra’s heart as well.

YOUNG: Joseph McBride is an associate professor of cinema at San Francisco State University and author of “Frank Capra: The Catastrophe of Success.” Thanks very much for talking to us.

MCBRIDE: Thanks for having me, it was fun.

The 1938 scene where Jimmy Stewart’s character talks about his passion for solar energy.


For more on the book “Frank Capra: Catastrophe of Success,” click here.