Climate Action, At Home and Abroad 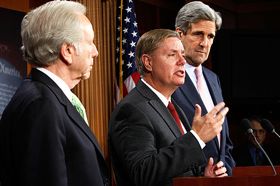 Ten months after the House passed a climate change bill, three Senators are responding with legislation of their own. Host Jeff Young talks with Alden Meyer from the Union of Concerned Scientists about what’s in the bill, and whether the legislation can push strong international action on global warming.

YOUNG: From the Jennifer and Ted Stanley Studios in Somerville, Massachusetts—this is Living on Earth. I’m Jeff Young.

The House of Representatives narrowly approved sweeping climate and energy legislation last year. But winning over the Senate is far harder.

Mr. Meyer directs policy for the Union of Concerned Scientists. He says the Senators are walking a tightrope over tough political terrain.

MEYER: Clearly what they’re aiming for here is a sweet spot, providing enough incentives for those industries to attract some members that normally wouldn’t vote for a climate bill, particularly some of the additional republicans without alienating progressive democratic senators and scaring them away from the bill. So the bill will parallel the house-passed bill in terms of calling for a 17 percent reduction in U.S. greenhouse gas emissions by the year 2020.

It will put a mandatory cap on emissions of the majority of the economy over time. There will be allowances that polluters have to purchase, and of course an open question is, What happens if the senate does take action on this basis, what happens in conference in the house before the bill goes to the president for a signature?

MEYER: Well, I think it’s definitely doable. Obviously the health care bill is also very difficult, covering a major sector of the economy and they got that through. There’s growing support for action on this because many of the industries, particularly the electric utilities would like to have more certainty about what the future regulatory structure’s going to be as they look to make multi-billion dollar investments in new power generating capacity.

So there’s an increasing number of businesses that are weighing in here, there’s national security arguments for acting on this because of oil imports, and I think everyone agrees that the time is now to do this on the senate floor if senators Kerry, Graham, and Lieberman can attract the necessary support to overcome a likely filibuster.

YOUNG: If this doesn’t work, if the senate can’t pass a climate bill, what happens to the international effort to control climate change?

MEYER: Well, there’s two issues there. One would be, would the administration follow through on the commitment we made in Copenhagen and say that even without legislation we would try to meet that 17 percent reduction goal in other ways, such as through EPA exercising its authority.

The even harder issue would be would we be able to keep our commitment to provide our share of the 100 billion dollars by 2020 that industrialized countries put on the table in Copenhagen for developing country adaptation, clean technology, and reducing deforestation activities.

YOUNG: So if congress doesn’t act, and doesn’t set some price on carbon, then we probably don’t have a ready pot of money to dip into to pay these developing countries the money we’ve promised them. Is that right?

MEYER: Without senate legislation, without a bill in congress that provided some dedicated long-term funding for those purposes it might be very difficult for the administration to keep that part of the bargain. And then I think you might see the whole house of cards fall apart.

YOUNG: Do I understand correctly that the United States has threatened to withhold international aid to countries that we have determined aren’t playing ball when it comes to the way we want to do climate change in the international arena? Is that right?

MEYER: That has been the public stance of the U.S., that if you don’t support the Copenhagen accord, which was the political agreement that was negotiated by president Obama and other world leaders in Copenhagen those last few days last December, we don’t intend to provide funding support to you in the future.

YOUNG: What do you think of that approach?

MEYER: Well, I think it risks being counter productive, I mean to say that you’re going to cut off assistance to countries who are suffering the impacts of climate change, largely due to emissions from the United States and other industrialized countries over the last hundred years I think risks looking pretty heavy handed and actually creating a backlash that won’t meet the goal of trying to get more countries to associate themselves with the accord.

YOUNG: Give me the big picture here. Are we anywhere close to the kind of action that seems necessary based on what we know from the science about the threat of climate change?

MEYER: Well, the answer to that is pretty clearly no. If you look at all the pledges that have been put on the table before, during, and since Copenhagen by the major emitting countries, not just the U.S., but major developing countries as well, such as China, Brazil, India, South Africa, others…collectively, most of the estimates are that those pledges put us on track to limit temperature increase over pre-industrial levels to somewhere between three point five and four degrees Celsius.

The goal that president Obama and other world leaders took on in Copenhagen was to try to limit that temperature increase to less than two degrees. It’s better than business as usual, which probably would have put us on a path to five degrees or over, but it’s not ambitious enough to avoid the worst impacts of climate change.

YOUNG: Alden Meyer with the Union of Concerned Scientists. Thank you very much.

MEYER: Thank you, Jeff, good to be with you.

[MUSIC: Trombone Shorty “On Your Way Down” from Backatown (Verve Music 2010)]