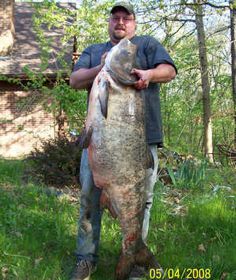 Big Head Carp can reach up to 100 pounds. (The Department of Natural Resources)

Roughly 600 million invasive Asian Carp have made themselves at home in Midwestern Rivers. As officials struggle to keep them out of the Great Lakes, one local company has a solution. It’s started to ship the carp back to China as food, where they’re considered a delicacy.

CURWOOD: The 40th anniversary of Earth Day put the spotlight back on efforts to tackle big environmental problems. Many of today’s challenges are more widespread than those we faced 40 years ago. But budgets are tight as well—so here’s a possible solution for one pernicious problem that could end up making money.

YOUNG: That might sound like rain. But it’s actually fish—hundreds of invasive Asian carp launching themselves through the air along the Mississippi river. The leaping fish have injured boaters—but that the least of the problem. The carp can weigh up to 100 pounds; they crowd out native species and they’re spreading north, threatening the Great Lakes.

Now an Illinois company, Big River Fish Corporation, has an idea to scale back the problem—send them back where they came from. The company just shipped its first load of 40 thousand pounds of Asian carp to China. Big River Fish marketing director Ross Harono starts at the beginning of this fish tale.

Silver carp, one of 11 species of invasive Asian Carp, jump out of the water when disturbed by boat motors. (Courtesy of the Wisconsin Department of Natural Resources)

HARONO: The Asian carp first came to the mid-west back in the ‘70s. These fish originally were imported for the catfish farms down in Louisiana, Mississippi River delta area, and then in the ‘70s there was a flood and the fish were able to escape in the Mississippi River Basin. It’s taken this long for these fish to come up north.

YOUNG: So we brought them to the U.S. on purpose?

HARONO: Yes, they were brought in on purpose. They were basically used to clean up the ponds—they eat algae, they’re basically bottom-feeders, so they’re able to help keep the large fish farm ponds clean.

YOUNG: Now, why is the Asian carp such a problem? We have lots of animals that get introduced—why is this one a problem?

HARONO: Well, the problem you have is that they grow ten percent a year in terms of their mass. So that six years ago when I first looked into this problem there were 55 million pounds of Asian carp in the Illinois River basin—now there’s about 100 million pounds because there’s been no natural enemies for these fish, no method of harvesting them, and there has been no, at least domestic, market for these fish.

YOUNG: And I guess that’s what you with Big River Fish Corporation are trying to solve—you want to create that market, right?

HARONO: Absolutely. Asian carp is viewed as a delicacy in Asia. The bones don’t create a problem because we’re used to eating with chopsticks and we spit the bones out. It’s just sort of an educated mouth and tongue in how to eat these fish. And they’re very tasty, so that there is a tremendous demand for this fish in Asia. 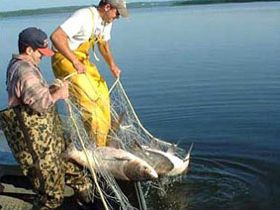 YOUNG: How much of the appeal of the fish that you are exporting to China has to do with the fact that China’s rivers are so very polluted that presumably people would not want to eat fish from them?

HARONO: That’s part of the marketing strategy is that we’re marketing it as a natural fish grown wild in the Mississippi River and Illinois River that jumps out it has so much energy, so when you eat it you’ll get some of that energy also.

YOUNG: Tell me about the fish because we have such an, I guess, cultural bias against eating carp here in the States—not many people eat carp here.

HARONO: Not many people eat a lot of the bottom-feeders because it’s viewed as fish that’s for the lower class, the poor, and there’s a cultural stigma against eating these fish.

One of the problems we have with these fish—once again there’s a lot of bones—they have these y-bones, which float on the side, 64 of them. So even though you cut a filet out, you end up with these small bones in it. But in Asia, once again, this is not a problem.

YOUNG: Well, this is a very different way of going about this problem because I guess traditionally what the authorities have been doing is trying to poison the Asian carp, trying to build these sort of electronic underwater barriers to prevent them from getting into the lakes—all of these things cost a lot of money. You’re kind of turning a problem on its head and saying, hey, instead of spending money on this, we might make money off this? 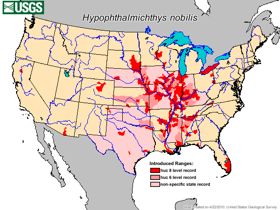 U.S. distribution of the Bighead Carp (Courtesy of USGS)

HARONO: We believe that this fish can be an economic engine for that entire region in Illinois. Big River Fish is located in Pearl, Illinois, which is in Pike County. We’ll be able to create about 170 jobs in that area.

YOUNG: So you’re shipping 40 thousand pounds to China, but you’re looking at millions of pound of this fish in the rivers? Can an operation like this make a dent in the problem of the Asian carp?

HARONO: Absolutely. If we pull out 30 million pounds a year, and that’s our goal, we’ll have the carp situation under control in five years.

YOUNG: Ross Harono telling us about ideas for taking a bite out of the Asian carp problem. Thank you very much.

EPA on the Asian Carp