A Satellite image of the Gulf of Mexico shows part of the oil spill from the Deepwater Horizons explosion. (Photo: DigitalGlobe)

BP is using hundreds of thousands of gallons of dispersants to keep the Gulf oil slick from reaching the coast. But there is little data on the ecological impacts of these chemicals. Host Jeff Young talks with Dr. Nancy Kinner of the University of New Hampshire’s Coastal Response Research Center about why important questions about dispersants remain unanswered.

YOUNG: From the Jennifer and Ted Stanley Studios in Somerville, Massachusetts - this is Living on Earth. I’m Jeff Young.

Federal officials say it’s an all hands on deck, 24/7 effort against the oil gusher in the Gulf of Mexico. But one of the main tools to minimize the oil’s impact raises its own set of problems. Some 400 thousand gallons of chemical dispersants have been sprayed on the surface and injected deep in the sea to speed breakdown of the oil. In a press teleconference EPA administrator Lisa Jackson said those dispersants have their own drawbacks and scientists aren’t sure how they might affect marine life.

JACKSON: Dispersants are not the silver bullet. They are used to move us toward the lesser of two difficult environmental outcomes.

YOUNG: A 2005 report from the National Academy of Sciences concluded, “In many instances the understanding of key processes is inadequate to confidently support a decision to apply dispersants.” We contacted Dr. Nancy Kinner for more on this. She directs the University of New Hampshire’s Coastal Response Research Center; it’s a clearinghouse for information on oil-spill response.

KINNER: I don’t think that our knowledge of dispersants is adequate. There’s just a lot of unknowns that still remain out there, and frankly the funding for this work has been very, very limited, which is one of the reasons why a lot of those questions are still unresolved.

YOUNG: Why have we had limited research into this because I know this issue of whether or not to use dispersants came up back during the Valdez spill during 1989—you’d think we would have studied this by now? 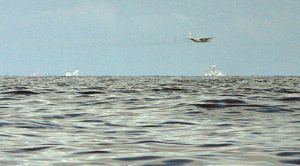 A plane sprays chemical dispersants over the oil slick created by the Deepwater Horizon explosion. (Courtesy of Flickr Creative Commons)

KINNER: There was a lot of funding that was authorized in the Oil Pollution Act of 1990 to do research, but as often times happens, when you have kind of a catastrophe like the Exxon Valdez, the actual appropriation of the funds never occurs.

YOUNG: So, Congress in theory wanted these studies to be funded, but never really came through with the dough?

KINNER: Well, not only Congress. Industry has also cut back on its R&D programs, so it really has been a problem across the board. And the comment always has been made that we don’t have big spills anymore.

YOUNG: Now, BP has been using large amounts of these chemical dispersants to try to break up the oil. How do those dispersants work, and what are some of the drawbacks with using them?

KINNER: The whole concept of the dispersant is that it basically is kind of a substances that we call a surfactant—part of it is soluble in the oil and another part of the molecule is soluble in the water. So what they do is they use these large airplanes with the dispersant on them, they have nozzles that spray it out over the water, and then the water action actually acts as the turbulence to pull that oil droplet out of the rest of the slick and put it into the water. The other key factor about this is that the degree of turbulence actually determines the size of the droplets.

YOUNG: And then what does that do in terms of the oil’s effect on the ecosystem there, where the oil is broken up out at sea?

KINNER: If you have those very small droplets for some of the organisms at the very base of the food chain they may ingest those particles. And that may not be good because you then get them being ingested by other organisms, etc. On the flipside of that, the smaller, very tiny droplets have a lot of surface area to them and by having a lot of surface area that means that you may be able to get faster colonization by bacteria and those bacteria can then use the oil as a food source and break it down. So there are kind of trade offs there.

YOUNG: Now the dispersants themselves are also toxic to some degree—how big a concern is that?

KINNER: There has been some work done on the toxicity of the dispersants, and the idea has always been that the toxicity is not a big factor because most of the dispersant becomes associated with the oil, and you don’t have very much free dispersant in the water. Unfortunately, we don’t have a lot of data on this to really show what proportion especially in a spill like this where were putting on so much actually does become associated with the oil, and what effect the toxicity could have.

YOUNG: I’m guessing that in most other spills where they used dispersants, it was just that, a spill; a certain known volume came out of broken tanker, for example. How was that situation different from what we’re dealing with now in terms of the decision on whether or not to use dispersants?

YOUNG: Then, what’s your recommendation when folks responding to this bill come to your center and say ‘What should we do?’ What do you tell them?

KINNER: Well, I don’t think that our knowledge of dispersants is adequate. However, having said that, right now the Coast Guard and the federal agencies and the industry folks are dealing with a spill that is very, very large and has no sign of abating.

And the decision has been made that the best course of action is to keep that oil as much as possible off of the marshes, out of those sensitive areas and the only way that they have of doing that, especially when the weather doesn’t cooperate and you have wind and waves is to add dispersant. There are going to be accidents, I mean, it’s just—if you do drilling the probability is that you are going to have an accident. The question is, can you live with the consequences of that accident?

YOUNG: Dr. Nancy Kinner directs the Coast Response Research Center at the University of New Hampshire. Thank you very much.

KINNER You’re very welcome, thank you for talking with me.

To hear more about the Bucket Brigade click here