Pushing the Envelope for Clean Air 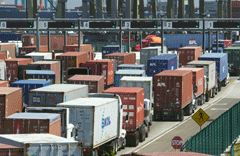 Trucks lined up at the Port of LA (Photo: Port of LA)

The Port of Los Angeles is the largest seaport in the United States and a major source of diesel pollution. It wants to turn drivers into employees so the burden of buying new clean trucks falls on companies and not on low-income drivers. As Living on Earth’s Ingrid Lobet reports, the issue is now before a federal judge.

YOUNG: The Port of Los Angeles is the largest seaport in the western hemisphere, receiving nearly a quarter of all the nation's imports. Heavy-duty diesel trucks pass through its gates some 15 thousand times a day.

YOUNG: That helps make it the most polluted part of a notoriously polluted region. Now the trucking industry and the city of Los Angeles are awaiting a decision in a case that's just the latest to test how far authorities in California can go to clean up dirty air. Living On Earth's Ingrid Lobet reports.

LOBET: The Los Angeles basin has the worst small particle or soot pollution in the country. Most of that soot comes from diesel: diesel-burning ships, diesel road equipment, diesel trucks. At seaports, ships, trains and trucks all converge in a choking haze. So two years ago the Port of Los Angeles banned old, dirty trucks from coming in to pick up containers.

But the Port didn’t stop there: It required that trucking companies purchase their own trucks and hire on truckers as employees, instead of contracting with independent owner-operators. Port leaders believed that companies, more than hard-pressed owner-operators, could afford to maintain trucks in clean running condition.

DIGGES: There couldn’t be a clearer example of a local government imposing regulations that upset and disrupt the marketplace.

LOBET: That's attorney Bob Digges, who represents the American Trucking Associations. The group sued the Port, saying this rule turned their business model upside down, because most trucks serving the Port were owned by independent operators. Digges spoke on the federal courthouse steps.

DIGGES: If Los Angeles is allowed to basically re-regulate the trucking industry, then every other jurisdiction in the country can wholly disrupt interstate commerce.

LOBET: The trucking association also says Los Angeles is disingenuous when it claims this is all about clean air. It says under the law, trucking companies have to maintain trucks they contract with—just the same as if the trucks belonged to them. Digges says the city has an ulterior motive: to help organized labor.

DIGGES: For years the Teamsters have been try for to organize the independent contractors—they can't do it, so the only thing to do is turn them into employees—that's the real issue here.

LOBET: But leaders at the Port of Los Angeles says it is all about air pollution. Government research shows residents in the port area have a 60 percent higher risk of developing cancer than people in the rest of the city, and their risk is increasing while risk decreases elsewhere in the city. Environmental groups, citing this data, kept suing the Port and they kept winning. They brought port expansion to a dead halt, admitted Port executive director Geraldine Knatz. 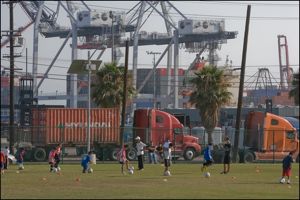 The Port of LA shares the neighborhood with several schools. Kids exercise and breathe the exhaust of port-bound diesel traffic. (Courtesy of Caltrans District 9)

KNATZ: We got a situation where were dead in the water on doing anything at the Ports here because we had so many environmental issues to deal with.

LOBET: Forced to act, the Port banned all trucks built before 1994 and instituted the employer rule. It also insists it has the right to revoke the port license of any trucker who repeatedly arrives at the gate with an old truck spewing black smoke. Attorney David Pettit is with the Natural Resources Defense Council, once the Port's nemesis, but now is its partner in this suit. Pettit says the Port needs the power to revoke a license, even if no other port in the country has it.

PETTIT: You have a trucking company that sends 100 dirty trucks in a row to the Port. LA can start a proceeding saying 'we're going to pull your ticket to come to the Port. You have to prove to us what you're going to do to clean up.' And that is going to enforce cleaner trucks a lot faster than relying on the feds.

PETTIT: The trucks at the port have been filthy. If the federal system worked we wouldn't have been in this situation.

LOBET: Now it's the job of a federal judge to decide whether LA's clean truck program is constitutional. For Living On Earth, I'm Ingrid Lobet in Los Angeles

Coalition for Clean and Safe Ports