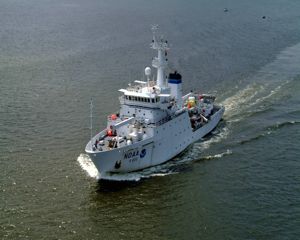 The National Oceanic and Atmospheric Administration's ship, the Thomas Jefferson, recently left on a nine-day mission to study subsurface oil in the Gulf of Mexico. Host Jeff Young talks with the ship’s commanding officer Shepard Smith about the high-tech advanced gear that the boat is outfitted with in order to track oil plumes on the move.

YOUNG: From the Jennifer and Ted Stanley Studios in Somerville, Massachusetts - this is Living on Earth. I’m Jeff Young. The oil washing ashore and moving in sheens in the Gulf is a sickening sight. But it’s only part of the picture. Underwater plumes of oil have been detected, some of them tens of miles long and thousands of feet down. But there is little information on that oil’s chemical makeup, how it’s behaving and how it might affect marine life.

SMITH: We have deployed a crude oil sensor on what’s called a moving vessel profiler. This is a really clever device that we deploy off the stern of the ship that can take a cast while we’re under way.

YOUNG: It sounds to me like you’re actually going to be able to, sort of, track these plumes- not just stopping and dropping place to place, but following it where it goes.

SMITH: Clearly, if there is a submerged plume it’s not a stable feature and we would want to continue to monitor and measure the progress of it and the size of it over time.

You know, where we have the highest confidence in a water sample with laboratory analysis, to say that what we’re observing truly is oil and it’s related to the spill, but on the other side we can cover much greater territory with much higher resolution with the sonar systems and the moving vessel profiler.

YOUNG: I mean, it sounds very exciting, it’s like sea hunt for oil, but on the other hand, it’s gotta be a little depressing, knowing that what you’re measuring is signs of possibly great damage to a great resource in the Gulf of Mexico.

SMITH: Well, I think you put it very well, and it’s very sobering. This is actually our second trip out here. When we passed by the spill site on our way in to New Orleans last week we were excited, as you said, getting all this gear ready, we were finally getting to the spill site and when we finally got there it got very quiet and everybody was really quite sober about what we were seeing.


Find out more about the research vessel Thomas Jefferson