The Gulf’s Other Deep Sea Wealth 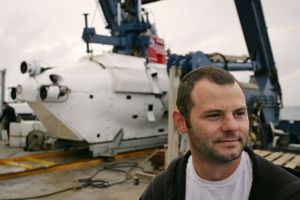 Researchers, trying to make sure deepwater oil rigs in the Gulf Of Mexico don't hit anything under the sea, made a surprising discovery not far from the BP disaster. Host Jeff Young talks with scientist Erik Cordes of Temple University about what he found.

YOUNG: Just about nine months ago another deep-sea expedition was underway, just 20 miles north from what is now the epicenter of the Deepwater Horizon disaster. And what they found gives us a sense of what’s at risk in the Gulf’s depths. Temple University biology professor Erik Cordes and his team made a remarkable discovery on the ocean floor under nearly 1200 feet of water.

CORDES: We were actually surprised. We’d never been to that site before, and we expected to find something slightly different. What it turned out to be was what we think is the second largest coral reef in the Gulf of Mexico, in deep water.

YOUNG: Wow. And what is a reef like at that depth?

CORDES: They look similar to what you would see in shallow waters. There’s a very large hard coral species that lives down there that’s creating a reef structure that is about 800 feet across in diameter, it’s roughly an oval, it supports a very diverse community.

YOUNG: And are these things that are new to science?

CORDES: A lot of them are new to science. Any time you go to a new site in the deep sea you anticipate discovering a number of new species. It’s been less than a year since we brought back our collections from there and so there are only a few things that are definitely new to science but we anticipate that there will be a number of additional new species.

YOUNG: What was the purpose of your research mission? Why were you out there looking for these reefs in the Gulf?

CORDES: It’s an ongoing study that’s funded by the U.S. Minerals Management Service and NOAA Office of Ocean Exploration. And our over-arching goal is to come up with a way to predict where these communities might be.

As the oil drilling moves into deeper and deeper waters we need to understand where there are these high-density biological communities on the sea floor so the Minerals Management Service can actually set up mitigation areas around these communities and prevent the oil rigs from directly impacting them.

YOUNG: So the purpose of this mission was to protect areas like this from off-shore drilling.

CORDES: That’s right. We’re out there in advance of some of these areas being leased to oil companies and we’re trying to locate these areas so that oil rigs aren’t placed directly on top of them.

YOUNG: I guess I don’t need to point out the irony in this situation, where less than a year after discovering this reef you’re talking about oil drilling perhaps negatively affecting it.

CORDES: That’s right. And it’s a major concern for us. But if we hadn’t been out there and if we hadn’t established some of our long-term study sites in this area we would have no way to gauge the impact of an event like this on the deep sea communities.

YOUNG: Well, now that we’re hearing about oil in that area not just at the surface, but, for some reason, staying deep in the water, what do you think might happen to these deep water reefs?

CORDES: That’s one of our biggest concerns. There are a number things we could imagine. If you would blanket a reef in oil that would obviously be a catastrophic event. We don’t know that that’s what would actually happen in deep water, we think that it’s more likely that these plumes are dispersed oil and if the oil or some combination of the oil and dispersants are hitting that site, there could be some serious damage to these coral reefs. We’ve seen how fragile these ecosystems are from a lot of the shallow water impacts and we’re really just hoping we don’t find something like that.

YOUNG: This strikes me as an amazing example of how little we know about the floor of the ocean. Even in the Gulf, where I guess we know it pretty well.

CORDES: Yeah, the Gulf is probably one of the best-studied deep-water basins in the world simply because there’s been so much human activity with off-shore oil drilling that’s been ongoing there for a really long time.

But even in the Gulf of Mexico, we’ve seen barely a fraction of the sea floor. We’re really at the early stages of our understanding of the deep sea in general, and in particular some of these coral communities, which are only recently being discovered.