A Clean Energy Wake-up Call from the Gulf 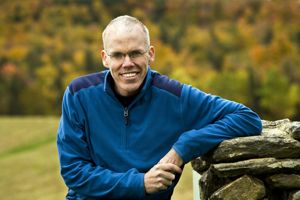 Environmental activist Bill McKibben has been a prominent voice on the dangers of fossil fuels. He says the gulf catastrophe is a reminder of our daily damage to the planet. (Photo: Nancy Battaglia)

Environmentalist Bill McKibben has long called Americans’ use of fossil fuels a dangerous addiction, and he says the disaster in the Gulf is just a reminder of the damage we do to the planet every day. With oil continuing to gush into the Gulf of Mexico, McKibben tells host Jeff Young it’s time the Obama administration seize the moment as a rallying point for public support of clean energy.

YOUNG: From Public Radio International, this is Living on Earth.

YOUNG: It’s Living on Earth, I’m Jeff Young. After more than a month of taking hits from the BP Gulf oil disaster, the Obama administration is taking a tougher stand. Attorney General Eric Holder announced a criminal investigation into BP’s behavior leading up to the April 20th explosion.

And, in a speech in Pittsburgh, President Obama proposed rolling back tax breaks for oil companies. And he pledged a renewed push for the clean energy and climate change legislation that has stalled in the Senate.

OBAMA: The votes may not be there right now, but I intend to find them in the coming months. I will continue to make the case for a clean energy future wherever and whenever I can…

OBAMA:…I will work with anyone to get this done. And we will get it done.

YOUNG: Author and activist Bill McKibben is, so far, not impressed. McKibben has been an influential voice in the environmental movement for decades. Two years ago he had hopes that the Obama administration would act on climate change. But McKibben says the president has not yet risen to the challenge.

MCKIBBEN: He’s making a start. But the sense of urgency isn’t there yet, and we need it from him, in part because he’s been much too willing to cuddle up to industry. Remember it was only two weeks before Deepwater Horizon exploded beneath the Gulf that the President himself said, ‘no worries, this stuff is safe now’. Well it’s not safe. It’s not safe in the Gulf and it’s not safe in the atmosphere.

And we need him to be leading this charge, rhetorically, legislatively. We need him to put into use that great army of people that he assembled for his election, the millions of people who gave money, who knocked on doors, who formed the biggest Democratic vanguard that we’ve really seen in this country. We need them out on the hustings working for change in energy.

YOUNG: Rahm Emanuel, member of the president’s cabinet, is fond of saying that a crisis is a terrible thing to waste- that you have to strike when the iron is hot. Do you see them doing that?

MCKIBBEN: So far, at best the president has said, well, we’ll use this as a way to remind ourselves that we need to take action like the sort of bill before the congress right now, the Kerry-Lieberman bill. That’s a very, very small start on the very big job we need to do.

And more than anything else, the thing not to waste here is the chance to explain to Americans why all fossil fuel is dirty. Oil and coal and gas themselves are the problem. Why, if that oil had made its way up to the surface and through a pipeline to Louisiana and been turned into gasoline in a refinery and put into the tank of your car, why the damage it would do spewing out of the tailpipe is every bit as bad as the damage that it’s doing now unleashed in the Gulf.

YOUNG: Many of the main-stream environmental groups, especially those very active inside the beltway in Washington, they seem pretty much tied in to this American Power Act, the Kerry-Lieberman bill that’s in the Senate now. The core of that is built around this compromise that there would be some expansion of off-shore drilling in exchange for some kind of a cap on greenhouse gasses. Here’s Dan Lashoff with NRDC explaining their position on that.

LASHOFF: We think that incentives for states to expand off-shore drilling have no place in this bill. But what makes this bill important is its fundamental limits on carbon pollution. You know, obviously deeper reductions faster would be better, but it’s a good start on what we need to do.

Environmental activist Bill McKibben has been a prominent voice on the dangers of fossil fuels. He says the gulf catastrophe is a reminder of our daily damage to the planet. (Photo: Nancy Battaglia)

YOUNG: So, Mr. Lashoff there making the point, he’s like, ‘yeah we don’t like off-shore drilling, but we gotta get some kind of action on climate change,’- is that the route to go?

MCKIBBEN: I think at this point any bill that includes more off-shore drilling is a non-starter. People like Dan are terrific lobbyists—we need to give them something to lobby with. The reason we’re not getting further in Washington, the reason that we’re making bad compromises with industry on these bills is because there’s not enough public outrage, and not enough public action.

And when we have it, we’ll be able really to let science dictate the terms of what needs to happen. Because at bottom, this is not a negotiation between the energy industry and environmentalists, or between Democrats and Republicans, or anything else- it’s a negotiation between human beings on the one hand, and chemistry and physics on the other. We see a mile down beneath the surface of the Gulf, what happens when you try to override physics and chemistry.

YOUNG: So what should those in the environmental movement be doing now if they wish to build a platform of public support for action on clean energy?

MCKIBBEN: We’ve got to organize, organize, organize. We’ve got to keep reminding people that there’s no problem more pressing than what’s going on in the atmosphere. If all we perceive is the horror that’s going on the Gulf, well that’s horrible enough, but the outcome will be that we’ll spend a lot of time worrying about what exactly type of technology to put on the bottom of oil wells, what kind of blowout preventers we need, how much BP should be punished for its very egregious sins, on and on and on. All important questions but nowhere near important as taking that horrible site and using it to get into our imaginations the invisible slick spreading across the atmosphere.

YOUNG: Bill McKibben, thank you very much for your time.

MCKIBBEN: Thank you so much.

YOUNG: Bill McKibben is scholar in residence at Middlebury College in Vermont. His new book is Eaarth: Making A Life On a Tough New Planet.