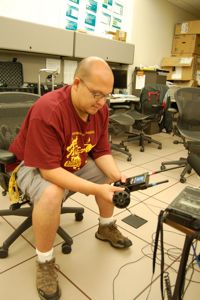 Robots have been instrumental in helping scientists tackle the BP Gulf oil spill. They're not only used to monitor oil and chemicals in the water, but they've been important tools in the physical efforts to cap the gushing oil. Using robots to help in emergencies is an emerging field. As part of IEEE Spectrum Magazine and the National Science Foundation's series "Engineers of the New Millennium," Lisa Raffensperger reports on a lab in Minnesota that creates search and rescue robots, including the rough and ready Scout.

YOUNG: No person can work where the oil is spewing into the Gulf a mile beneath the sea. Engineers are relying on robots to stop the spill. Robots also come to the rescue on the surface - helping search teams burrow through rubble to locate survivors after a disaster. In a Minneapolis lab designers built a tough robots that can even be thrown through a window. Plymouth Minnesota SWAT team Sgt. Chris Kuklok says it helps police do their jobs.

KUKLOK: Patrol officers were called to a residence where a male was staying, possible suicidal. Patrol officers showed up there and smelled a really strong odor of propane coming from the house and they decided to back off. They used the robot to make entry basically in the first floor. They used it and drove it down to the basement area and cleared that as well, where they found he had set up some propane tanks to explode, and so the robot was pretty integral in just helping them clear as much as possible inside the structure without having to send bodies in harms way unnecessarily.

YOUNG: As Lisa Raffensperger reports for the IEEE Spectrum Magazine and the National Science Foundation series "Engineers of the New Millennium,” and has the story.

RAFFENSPERGER: Duc Fehr is a PhD researcher in the Center for Distributed Robotics at the University of Minnesota, Twin Cities—the lab that invented the Scout robot.

FEHR: This is the Scout robot, it’s probably the most important robot in our lab, it’s basically the one that kind of made the lab. It is a very tough robot, you can toss it around like this--

--and it still works.

RAFFENSPERGER: About the size of a Coke can, the remote-controlled bot carries a video camera between its rubber wheels. It was designed as a rugged reconnaissance tool for military, police, and rescue agencies—over 100 of which are already using it worldwide, including the U.S. military in Iraq and Afghanistan. The Plymouth, Minnesota, SWAT team also uses a Scout, and Sergeant Chris Kuklok says it has given his team a first set of eyes on dangerous situations.

KUKLOK: You don’t eliminate all the risk you just try to minimize it.

RAFFENSPERGER: The Scout is just one of the robots that has been, or is being, developed at the Center for Distributed Robotics.

PAPANIKOLOPOULOS: This is the place where we’re building the robots, we’re testing them, we modify them—it’s where all the action is. Where the magic happens.

RAFFENSPERGER: Nikos Papanikolopoulos is director of the center. The Scout has been his biggest success, spawning its own company, but its celebrity belies the real emphasis of the lab—creating robots of diverse shapes, sizes, and specialties that work together in a single team. Those diverse robots, at the moment, include an amphibious robot, a transforming helicopter bot, and a big robot that can climb stairs and deploy smaller bots.

Finally, there’s the Adelopod. It’s unique, in that it tumbles- like a crab might move, if it had only two legs.

RAFFENSPERGER: No answer—yet. But it’s a problem the lab is hard at work on. One solution they’re exploring is programming the robots to follow one another, using only their video cameras. Because of their size, small robots may lack the equipment to communicate with each other, explains PhD student Hyeun Min.

MIN: You know, small robots have very limited resources, so if they can follow a big robot which has much resources, many resources, then it would be easier to deliver them.

RAFFENSPERGER: And there are strengths of heterogeneous robotic teams. Each robot can specialize on one or two tasks, and rely on other robots to help with the rest. It’s teamwork—a lot like the teamwork behind the scenes to create these robots, says grad student Andrew Carlson.

CARLSON: We had kind of lab meetings, different things, where we’d brainstorm different wild ideas for robots, anything and everything we could come up with.

PAPANIKOLOPOULOS: So it’s a playground, it’s a robotics playground.

RAFFENSPERGER: And the schoolyard lesson, for these robots, is playing well with others. They’re learning. For Living on Earth, I’m Lisa Raffensperger in Minneapolis.

YOUNG: Lisa Raffensperger originally reported this story for the series "Engineers of the New Millennium: Robots for Real", a co-production of IEEE Spectrum magazine and the Directorate of Engineering for the National Science Foundation.


Center for Distributed Robotics at the University of Minnesota