No cattle grazed the plot on the left. On the right, hooves broke up the soil and animal waste provided fertilizer. (Photo: Africa Centre for Holistic Management)

The winner of this year’s Buckminster Fuller Challenge is an initiative that helps transform packed dry grasslands and savannahs into water-rich pastures. Operation Hope promotes managed cattle grazing, a technique that contradicts conventional beliefs on the effects of animals and soil preservation. Host Jeff Young talks with Allan Savory, founder of the Africa Centre for Holistic Management and the Savory Institute and Professor Zakhe Mpofu, special advisor to the Zimbabwe project.

YOUNG: Conventional wisdom has it that cattle are bad for the land. They pack soil so hard that plants can't grow. But sometimes what we think we know, isn’t necessarily so.

MPOFU AND SAVORY: Thank you.

YOUNG: So isn’t desertification driven by over-grazing? How can cattle be part of a solution when we’ve been thinking they’re the problem?

SAVORY: Yes it’s in the public media and the myths and so on, livestock cause desertification and they have historically. And I used to condemn them totally until I found from my own research that I was wrong. Now I defend a completely different position. Livestock are the only tool available to science with which to reverse desertification. It depends how you manage them, how you run them. 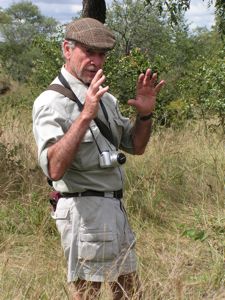 YOUNG: Professor, help us understand a little more how this actually works. How do you keep the animals where you want them?

And our cattle, if you can picture this, are over night in lion-proof, predator-proof corrals. Because we are predator friendly in what we are doing, we want the predators. And then during the day they are herded to a plan and the herders just herd them very, very calmly in a bunched manner. And that plan leads to no plants or soil on our land being exposed to the animals for more than 3 days—ever—and then not re-exposed for 6-9 months.

YOUNG: But what’s different about the use of land by cattle who are bunched together versus those who roam more broadly?

SAVORY: The Dimbangombe Ranch that Zakhe and the others are managing and running is a microcosm of the biggest problems in the world: poverty, violence, droughts and floods-almost perennial now. Now, what we’ve done there is to return it to animal-maintained rather than rest and fire grasslands and savannah.

So we’ve increased the livestock four times and because of that we now have an abundance of grass, even in a dry year we’re not worried at all about drought and forage production. And we now have open water with water lilies, fish a mile above where we’ve ever known water historically in the river system, right through the dry season.

YOUNG: It kind of makes you wonder why people haven’t been doing it this way before. Why do you think it took so long to discover this way of doing something as elemental as herding cattle?

MPOFU: And that’s what it is. And, that’s why I think most people have been skeptical and said even said, ‘Prove it- whatever it is you are saying works, let’s see you proving it’.

No cattle grazed the plot on the left. On the right, hooves broke up the soil and animal waste provided fertilizer. (Photo: Africa Centre for Holistic Management)

YOUNG: What has participating in this meant for you?

MPOFU: It has meant quite a lot for me because I have seen how communities can be changed. Their lives can be changed because if you look at this, in this issue, there is the productivity of the land, there is the productivity in terms of livestock production, but there is also environmental issues as well as economic and social issues. In this program what fascinates me about it a lot is it also has social aspects which most people don’t consider. You look at communities these women and children who are affected by this program, one the main outputs of it is the improvement in water.

As the land improves more water becomes available, and then the labor of fetching water from long distances becomes not an issue anymore. So it’s not only about land, it’s about land and people. So you have an issue of increasing crop productivity. You have water. And this is all in terms of contributes in terms of reducing poverty. So it looks like we have an answer for Zimbabwe and for the world, really.

[MUSIC: Hugh Masakela “Grazin In The Grass” from Live At The Market Theater (Four Quarters Records 2007)]