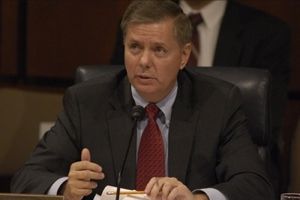 Sen. Lindsey Graham has dropped his support of comprehensive climate change legislation and is co-sponsoring an energy-only bill.

The U.S. Senate rejects a resolution that would strip the EPA of its authority to regulate greenhouse gas emissions, and the climate and energy bill faces an uphill battle in the Senate. LOE’s Washington correspondent Mitra Taj talks with host Jeff Young about the latest on climate change legislation.

YOUNG: Images of oil-coated pelicans and distraught fisherman are focusing some minds in Washington. At both ends of Pennsylvania Avenue, lawmakers are reevaluating the country’s energy policy. The U.S. Senate just saw a key moment in a 47 to 53 defeat of a measure that would have stripped the EPA of its ability to regulate greenhouse gases.

That proposal, by Alaska Republican Lisa Murkowski, had little chance of becoming law—President Obama had pledged a veto if it passed. But the vote was widely viewed as an indicator of where the votes are as the Senate looks to more meaningful action on energy and climate change over the summer. Living on Earth’s Mitra Taj has been watching all this carefully, she joins us now from Capitol Hill. Hello Mitra!

YOUNG: So, this was closely watched by industry, by environmental groups…why? Why was the Murkowski proposal such a big deal?

TAJ: Well, it’s basically an attempt to keep the EPA from doing something about climate change. And the Supreme Court just gave them this authority, and taking it away would have really kind of knee-capped their recent agreement with auto makers to tighten up fuel efficiency standards. This was, kind of, the only tool the administration has to reduce greenhouse gas emissions in the absence of legislative action.

YOUNG: So they still have that tool because this proposal failed, but Senator Murkowski got 47 votes here. What does that tell us about chances for a climate bill?

TAJ: 47 is a little too close for comfort for people pushing tougher policies for polluters. So Senator Murkowski started out with the support of all Republican senators and along the way she picked up 6 Democrats, Jay Rockefeller, Blanche Lincoln, Evan Bayh, Ben Nelson, Mary Landrieu and Mark Pryor. And you know another surprise vote for the resolution was moderate Republican Susan Collins from Maine. She’s co-sponsoring a bill that would cap greenhouse gas emissions. So the feeling is that if a handful of Democrats and a moderate Republican won’t come out against Murkowski’s resolution, they might not come out in support of comprehensive climate change legislation either.

YOUNG: Well you know, I know the president has made a big deal of saying recently he’s going to push to get votes for a climate and energy bill, he singles out this effort by Senator John Kerry and Senator Joe Lieberman called the American Power Act…is that going anywhere?

TAJ: Well they’re having a tough time picking up Republican support for their bill. You might remember that they were pinning all their hopes on Lindsey Graham, a Republican from South Carolina. He helped write a lot of their bill, but he dropped out just before it was released, and since then he’s been edging further and further away. I caught up with him after a press conference and asked him just how concerned he is about climate change.

GRAHAM: I am more concerned about moving to a low-carbon economy for national security reasons and cleaning up the air than I am about the immediacy of the planet melting. But I do buy into the idea that carbon emissions are not good for the overall health of individuals or the planet as a whole. But there’s nowhere near 60 votes to save the polar bear.

TAJ: So you’re not concerned about runaway climate change, that’s not—

GRAHAM: No I think they’ve over sold this stuff quite frankly. I think they’ve been alarmist, I think the science is in question- the whole movement has taken a giant step backward. But I do believe the environmental benefit of a low-carbon economy is worth the Republican Party’s time and attention. Does climate change have to be your religion? No. It is not my religion it is my concern.

TAJ: So, Senator Graham no longer a vocal supporter of a climate change bill. And in fact he’s just teamed up with another Republican, Senator Dick Lugar, to push an energy- only bill.

YOUNG: But would that get us the kind of reductions that scientists say we need if we’re going to avoid the worst of climate change?

TAJ: No, not really. Lugar says his policies would add up to some reductions, but they’re really nowhere near what the scientific community is recommending.

YOUNG: Where does that leave the Kerry-Lieberman bill? That’s the one we had been thinking was going to be the climate and energy bill.

TAJ: Right, well that’s what everybody wants to know. Kerry says he’s not giving up. Just hours after Lugar and Graham offered up their bill, I went to an environmental event where Senator Kerry was giving a speech.

KERRY: I hear too many people who sort of want to say, “Oh maybe we should do an energy-only bill, or maybe we ought to do this or that, or something less.” Well we did energy-only in 2005. We did energy-only in 2007. Energy only will not send the price signal about the cost of carbon. It will not unleash billions of dollars of investment in the private venture capital sector. Well I say we gotta go out and push, baby, push, and win, baby, win.

YOUNG: Push, baby, push. Well, ok. But if there’s going to be a push, that implies it’s gotta come from the leadership. What do we know about where the Democratic leadership is on this issue now?

TAJ: No one really knows what majority leader Harry Reid really wants in his heart of hearts. Instead of taking up Kerry and Lieberman’s bill for debate he’s asked the chairman of all senate committees for their ideas on a bill to promote clean energy and also a bill to get tough on the oil industry. 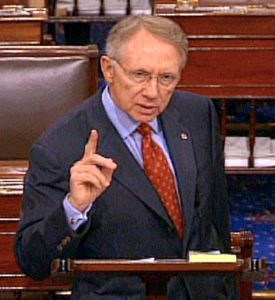 YOUNG: I see, so you put those two together and it makes it harder to vote against one without looking soft on BP in the midst of the big oil spill, that sort of thing.

TAJ: Right, right. What Reid didn’t mention were the words climate change. There were rumors that he might even reduce the climate change bill to an amendment. So, clearly, now there’s a lot riding on what position the White House takes. Will the President accept an energy-only approach, or will he insist Congress limit greenhouse gas emissions?

YOUNG: Mitra Taj, thanks very much.

More on the Kerry-Lieberman bill.

Click here to learn more about the Lugar-Graham proposal.

Listen to more of Kerry's speech.