A New Playground for Kids to Play Naturally 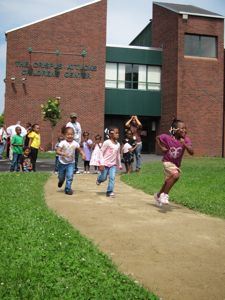 A preschool in Boston’s Dorchester neighborhood opened a brand new, natural playground. It’s a green space for kids to play outside and garden. And as Living on Earth and Planet Harmony’s Ebony Payne discovered, this playground has also become a refuge from gang violence.

YOUNG: There's a new kind of playground in Boston's Dorchester neighborhood. It's designed to bring a small part of the great outdoors to the inner-city. The natural playground just opened, and it's already turning out to be more than just child's play. Ebony Payne of our sister program Planet Harmony reports.

PAYNE: It's morning recess at the Crispus Attucks Children's Center in Boston's inner city neighborhood of Dorchester. Preschoolers aged one through six are having fun but in an entirely different way than what they're used to. 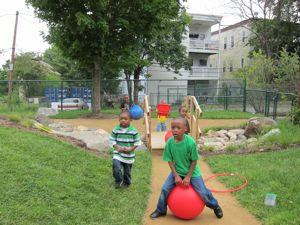 CHRISTIAN 1: I call it an oasis in the middle of the city.- an experience that urban children don’t usually have.

PAYNE: That’s Leslie Christian, President of Crispus Attucks. She proudly shows off the results of the preschool’s three year project. It’s a natural playground and it just opened. Kids are rolling down a grassy hill and catching bugs…

PAYNE: …climbing wood poles, and all over a fortress made of logs, and playing with water…

CHRISTIAN: Before we did this playground it was a traditional playground with plastic structures, climbing things. There was very little green. And so what we tried to do was develop something that was green, beautiful.

PAYNE: What use to be here at the Crispus Attucks preschool was your average metal jungle gym and a plastic slide. There were no shrubs, few trees, not much shade. And just next door, a rusty fence surrounding an overgrown field where somebody dumped a shopping cart. The city was supposed to develop the land... but never did. Leslie Christian had enough. She decided the time had come to bring nature to her playground.

CHRISTIAN: We took out a lot of the brush, we opened this up, we re-grated. Eventually what we’re going do, is we’re going to be planting Virginia Creepers along the fence so that they’re will be privacy, and it will be completely green and the noise level from the street will be reduced.

PAYNE: Natural playgrounds like this can be found in suburbs, but this is the first of it's kind in Boston's inner city. It's an environment designed to stimulate the senses. Discover smooth stones, and sweet smelling plants. The goal is to foster interaction and create a sense of intimacy with the natural world.

CHRISTIAN:
Over here to the left you’ll see the vegetable gardens.

PAYNE: Each preschool class gets their own little plot where they dig in the dirt and plant veggies. Kids and plants grow. At the end of the season they'll harvest and cook them up.

CHRISTIAN: And it’s really helpful to these children who don’t see things growing and think that all fruits and vegetables come from the Stop and Shop. So they’ll learn where they come from and then they’ll appreciate eating them.

PAYNE: A third of these kids are already considered obese ...and they're not even 6 years old. Many will go on to develop diabetes.

CHRISTIAN: If we can start them off to think in more healthy ways, to think not about fast food so much, about fruits and vegetables, and about exercise. If you develop it early, its just natural, it comes natural to them.

PAYNE: But Leslie Christian says the new playground its more than just food and games. The natural environment is meant to stimulate cognitive development and is a learning experience for kids and their teachers.

CHRISTIAN: Oh, they love it! They are spending so much time outside now where as before it was a struggle both to get the teachers to get them outside. And, they love it, they love being in the green.

PAYNE : Teacher Diane Cox and her class of terrible twos have learned to love the new natural playground.

COX: I think that I see a difference. The difference vs. always climbing a structure and swinging. They get to roll around; I see more rolling around in the grass. They want to look at the plants, and at the green habitat. So it’s a lot better, its something new for them, they’re not used to seeing something like this on an everyday basis…

PAYNE: Building this natural playground in Dorchester, didn't come cheap. A traditional commercial playground goes for tens of thousands of dollars. Leslie Christian says this one costs a quarter of a million.

CHRISTIAN: Most preschools are in the business of just trying to survive in this economy and not much less spending money to develop something...No public funding sources are giving money for this kind of development. This is all privately funded, philanthropic money.

JORDAN: Oh it’s more expensive to develop. But the long-term effects are what we’re all looking forward to.

PAYNE: Theresa Jordan is project manager of the Children's Investment Fund. The Fund provided the initial and largest loan to the Crispus Attucks' natural playground. It's a lot of money she says but it’s an investment in kids and a community, where gangs are a way of life and too often… death.

[TV SOUNDS] REPORTER: This crime that was committed in Boston last night was about as brazen a murder as you can imagine. It has left the community outraged and a mother heartbroken.

PAYNE: Amid the danger in Dorchester the Crispus Attucks natural playground has unexpectedly has become a green safe haven for families, says Leslie Christian.

CHRISTIAN: What happens is the playgrounds in the area, really, they’re really the domains of the gangs. And so then what happens is families send their children over here because this is safe.

PAYNE: This playground is the first of four natural playgrounds to be built in Boston’s low-income neighborhoods. The next is set to open later this month, giving kids with HIV/ AIDS a green place to play.

For Planet Harmony and Living on Earth, I'm Ebony Payne in Dorchester, Massachusetts

YOUNG: Planet Harmony invites everyone to the environmental discussion and has special appeal for young African Americans. Log in and lend your stories, audio, video to our site at myplanetharmony.com.