The Mississippi River could be a crucial tool in keeping oil out of the sensitive Louisiana marshes. The river has already protected certain areas from oil, and Paul Kemp, a coastal scientist with the National Audubon Society, wants to increase this natural defense. Kemp sent a proposal to the EPA asking them to divert more water from a dam near Natchez, Mississippi, and he tells host Jeff Young how the increased water flow could hold more oil offshore.

YOUNG: Meanwhile, in Louisiana, the fight to keep oil out of the marshes is getting desperate. Governor Bobby Jindal won approval for six berms of dredged sand to block incoming oil. But a number of coastal scientists doubt the sand berms will work, and they warn that changing the water flow could increase harm from erosion.

That debate set geologist Paul Kemp to thinking about other solutions. Dr. Kemp is a coastal restoration expert and Vice President of Audubon’s Louisiana Coastal Initiative. He wants to enlist the mighty Mississippi in the fight against the oil.

KEMP: It did occur to me that perhaps a better tool is out there, that is more at hand, more of a natural solution, and that’s when I came up with idea of just trying to put as much of the river out there as we could. I noticed that we had a situation in which there was a fresh water head on the marshes and this was actually limiting the intrusion of the oil into the interior of these systems. And so, it occurred to me that the most important thing we needed to do was at least try and sustain the flow of the river out there while we’ve got this oil continuing to spew into the Gulf.

Mississippi River water diverted into Breton Sound marsh in La. Under Paul Kemp’s proposal more water would flow through diversions like this to help keep oily water out of marshes. (Photo: John Lopez)

YOUNG: And we can do that, because, we have a sort of spigot on the Mississippi called the ‘old river control’ up river from you that splits the river and sends a lot of it one way instead of the other way. What’s your idea there, what do you want to see done with that?

KEMP: Well right now it’s on autopilot. That is, every day out of the year it’s maintained at what we call a 70-30 split, that is 70 percent of the goes down the main stem past New Orleans and 30 percent goes to a mouth 150 miles to west of the bird split. What I’m talking about is trying to shift more of that flow back over to the main stem so it would be more like 80-20.

And of course that then becomes the source for water going through diversion structures, and out the passes at the mouth of the river, and that’s what’s keeping the oil out of those bays, out of those marshes. 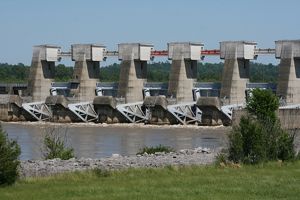 The Old River complex controls flow on the Mississippi and Atchafalaya rivers. Paul Kemp would like more water to reach the Gulf. (Army Corps of Engineers)

YOUNG: So your idea essentially is just a bigger pulse of water going down the Mississippi to push back against the incoming oil.

KEMP: Yeah, that was the start of it and then it occurred to me we have a lot of water stored behind dams in the tributaries that could be sent our way to try and sustain a higher discharge while we’ve got this oil threatening the coast.

YOUNG: I guess it’s flow of river versus flow of oil. If…

KEMP: Well and the oil comes in with the tides, so you need a force that will oppose the incoming tide and that’s provided by the river, there’s really no other comparable force out there.

YOUNG: I got a sense of the force of the river on a trip with coastal scientist John Lopez with the Lake Pontchartrain Basin Foundation. Lopez showed me a diversion structure built into the banks of the Mississippi near its mouth in Plaquemines Parish, Louisiana. When the river’s high the diversion carries two hundred cubic feet per second of Mississippi river water out into the surrounding marsh, pushing back against incoming oil.

LOPEZ: I think that it has that potential. The oil, to a large degree, is carried by currents. If you have an incoming flow that is reversed by having this freshwater flow into it, yeah, that could definitely stop it.

YOUNG: Fisherman Rodney Echelard, of Pointe á la Hache, thinks that flow of river water is what’s keeping him in business, while other fishing grounds have been closed down because of the oil.

ECHELARD: Yeah, yeah, thanks for the river, thanks for river. Y’know with the flow of the river our side we able to fish- but god knows how long that lasts. ‘Cause once the river crests, it’s coming back.

YOUNG: Audubon’s Paul Kemp thinks keeping the river flowing high can keep more fishermen in business and keep oil out of the marshes.

KEMP: All I'm asking for is a national plan to deal with this national emergency, and that means putting all the water control assets in the Mississippi Valley to use to prevent further damage to our coastal wetlands.

YOUNG: How much time do you think it would buy for the coast, how much could it do to keep the oil at bay?

KEMP: Well, one of the things we don’t know is how long we’re going to be continuing to endure this nightmare. We don’t know how long before there’s some kind of resolution or stopping of the flow, so, everything we do is trying to buy time, basically, with the hope that at some point the flow will be staunched. If we could just avoid a major oiling of the marsh, then we will have done a lot of good I think.

YOUNG: Dr. Paul Kemp is a coastal scientist for the National Audubon Society, thank you very much.

KEMP: Thank you, it was a pleasure.


A map of the Mississippi Delta Region. (Be sure to check out the satellite version of the map.)