The Deepwater Horizon incident isn’t the first major oil spill to hit the Gulf of Mexico. In 1979 the Ixtoc well blew out, gushing nearly 3.3 million barrels of oil into the shallow waters of the Gulf. Host Jeff Young asks Professor Wes Tunnell of Texas A&M’s Gulf of Mexico Studies program, how the Gulf responded to that spill and how it might respond to this one.

YOUNG: Well it’s not the first time the Kemp’s Ridley and other sensitive wildlife in the Gulf have faced a big oil spill. In fact, the biggest accidental oil spill of all time nearly smothered the Kemp’s Ridley’s main nesting beach. That spill from a Mexican oil rig called the Ixtoc One started 31 years ago this month. The gusher flowed for 10 months, pumping some 140 million gallons of oil into the southern Gulf. Wes Tunnell, Associate Director of the Harte Research Institute for Gulf of Mexico Studies at Texas A&M was one of the few scientists to closely study the ecological impact of the Ixtoc spill. And his work gives those watching the current disaster in the Gulf a rare ray of hope. Dr. Tunnell welcome to Living on Earth!

TUNNELL: Thank you Jeff it’s good to be here.

YOUNG: Well now tell me what happened with this oil rig Ixtoc back in June 1979.

TUNNELL: We got word that there had been this blowout of the well, it’s about 50 miles north of the island and city of Ciudad del Carmen in the southern Gulf of Mexico. And knowing the currents we thought it wouldn’t be too long, probably a couple of months, before it would reach the Texas coast. And sure enough, actually two months to the day, the oil started showing up down around the Rio Grand at the very southern border of Texas and Mexico. And then over the next couple weeks it coated the entire shoreline of the south Texas beach area for about 170 miles.

YOUNG: So what did you do when it became apparent that this was a big spill heading for shore?

TUNNELL: So, we went out before it got here with my graduate students and took samples across the beach so we would have samples to know what was living there before the spill got here.

YOUNG: So you had your baseline against which to compare what the oil was doing to those organisms.

TUNNELL: Yes, that’s exactly true. It’s amazing the number of small creatures, mainly little invertebrates that live in the sand out there. Most people aren’t aware as they’re walking on the beach that there’s literally thousands of different kinds of little worms, crustaceans, little shrimp-like creatures down below their feet. And those are all a lower part of the food chain and very important to that area. There were reductions in the numbers of individuals in the inter-tidal zone to as much as 80 percent, and so we were greatly concerned about that.

However, within about 2-2 &frac12; years after that, the population levels were back to up what they were before the spill. So it shows that, those kinds of populations are quite resilient, they’re small organisms and they have high reproductive capability and they were able to re-populate the area pretty soon.

YOUNG: So at least by that measure of the impact of the spill, this is kind of a hopeful message for people today looking at what the ecological impact might be from the Deepwater Horizon spill.

TUNNELL: Yes, that’s correct. We have to be careful of going too broad with the inferences. Our fine-grained sandy beaches on the Texas coast are fairly easy to clean up and fairly quick to recover.

YOUNG: Uh huh. And that’s not at all the kind of coastline that’s being impacted now in southern Louisiana? 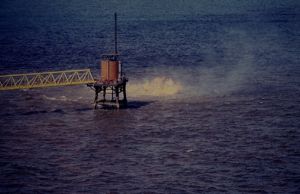 TUNNELL: Yes, you’re right on that. It’s, that area of the Mississippi Delta, the salt marshes that are in that area, are the most impacted, and the most difficult to clean up. To either side of Louisiana, on the sandy beaches of Texas and then Mississippi, Alabama, Florida, those fine grained beaches again, and so those are areas that can be cleaned up. But the Mississippi Delta again is really a problematic situation.

YOUNG: And what do we know about ecosystems roughly equivalent to wetlands that were affected by the Ixtoc spill back in ’79-‘80.

TUNNELL: Well that’s one of the things that kind of fell by the wayside. Unfortunately, both in Texas and in Mexico, once the spill was over with, capped off, and once the oil was cleaned up and most of the public places, the research funds stopped.

And so we don’t have, unfortunately, any comprehensive studies that were done to see the overall impact. There was one area in the southeastern corner of the Gulf of Mexico in the state of Campeche that has the tropical equivalent to the salt marsh that’s up there in the Mississippi Delta, and these are mangroves, they’re trees that actually grow at the edges of the water. And, supposedly they were pretty heavily impacted but there were no studies done and it was only anecdotal information that we have from that.

YOUNG: When you look at the Gulf today, what’s different that might affect this ecosystem’s resiliency now?

TUNNELL: That’s a really good question, and one that scientists are concerned about in the area. This resilience may have changed over these three decades of time. We’ve over-fished many of the fisheries there, we’ve used bad fishing techniques that have destroyed habitats, we’ve actually destroyed habitats of marshes and oyster reefs and things along the shoreline. Our dead zone that everybody’s aware of has expanded. So we’ve caused a lot of different kinds of detriments or insults to the Gulf of Mexico and it may not be as resilient now, than it was back 30 years ago.

YOUNG: Well given those big differences between the Ixtoc gusher and the Deepwater Horizon gusher, how useful is the Ixtoc by way of, you know, trying to guess what the ecological impact will be from this spill?

TUNNELL: Thank you Jeff, I enjoyed being with you.


Wes Tunnell’s study of impacts of the Ixtoc 1 spill