Indonesia, one of the world's biggest emitters of greenhouse gases, has partnered with Norway to protect its forest carbon. In exchange for one billion dollars over the next five years, Indonesia has promised to keep its powerful oil palm and pulpwood companies from clearing forest for two years. Living on Earth's Mitra Taj reports on the big deal and some of the big questions it raises.

YOUNG: And now for some environmental news you might have missed since news of the oil spill broke. Norway made a bold move against climate change. It’s offering Indonesia a billion dollars to NOT destroy its rainforests. In exchange, Indonesia will stop clearing forests for two years. The idea is to lower the huge CO2 emissions that come from cutting trees. The results could be substantial—by some estimates Indonesia’s rapid deforestation makes it the world’s third largest emitter. Living on Earth’s Mitra Taj reports.

TAJ: This Norway-Indonesia forest deal is a big deal. A billion dollars is a lot of conservation money for a developing country… and the amount of carbon dioxide it could keep from escaping into the atmosphere could be just as impressive. Salman al-Farisi, a diplomat at Indonesia’s embassy in Washington DC, says 80 percent of Indonesia’s emissions come from deforestation.

AL-FARISI: This is a very important number. If we fail to do something on forests we will lose about two thousand islands in Indonesia. So this is not only environment, but also existence of our territory.

TAJ: To help keep parts of Indonesia from slipping into rising seas, last year Indonesian President Susilo Bambang Yudhoyono vowed to cut current emissions by a quarter by 2020. That’s more ambitious than the U.S. pledge. And now with this billion dollars from Norway, Indonesia is ready to say how it will make the cuts. For two years it will prevent oil palm and pulpwood companies from converting forests into plantations. Erik Solheim, Norway’s Minister of Environment and International Development, says it’s a sign Indonesia is serious.

SOLHEIM: This is a very brave step of president Yudhoyono making a moratorium. It may be he’s taking a big political risk and he should be praised for taking that step. 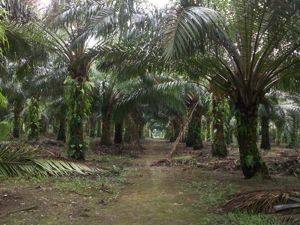 TAJ: Indonesia actually already has laws against turning forests into plantations, but officials frequently ignore them. This high-profile moratorium raises the stakes for enforcement. No carbon saved—no billion dollars.

SOLHEIM: They make their own decisions as to how they will reduce the emissions, and then they will get paid in accordance with results.

TAJ: But Solheim says there’s a fine line between ensuring success and dictating terms to a developing country. Norway has taken a delicate approach to negotiating some controversial parts of the agreement, like how much say forest communities will have in what happens to the land, and whether Indonesia will break current contracts with plantation companies

SOLHEIM: Ultimately that decision will have to be made by the Indonesians and not foreigners. I mean if anyone would come into Norway to tell us how to use natural resources, our oil our gas, or what we should do with out mountains, agriculture, we would not take to it very lightly. So we are not doing that.

TAJ: Indonesia and Norway want to produce clear details of their plan by fall. Fred Stolle is a forest specialist for the environmental think tank The World Resources Institute. He says that means they’ll need to answer a lot of questions soon.

STOLLE: Which is the institute who is getting that money? Will that institute work with Ministry of Forestry or the Ministry On Climate or the Ministry on Environment? How is the money divided? Does anybody in the field see the money? There’s no definition for natural forest, so secondary forest is not natural- can that still be converted? Are there enough projects to do with a billion dollars in a relatively short time frame?

TAJ: Ideally, the stickier elements of Indonesia’s deal, with Norway would have already been decided at the United Nations, as part of a new global treaty to address climate change. But those international talks have stalled, and with them—clear consensus on how countries, like Indonesia, should go forward. Fred Stolle says that adds to the importance of an agreement like this.

STOLLE: You know we have all those ideas, we have to stop tropical deforestation, but no one wants to pay for it. We said, ‘please Indonesia stop it, but, by the way, we don’t buy sustainable wood from you,’ and you have to think a developing country wants to develop- it’s a developing country. So Norway decided to go bilateral. They say, ‘let’s not wait because every year we wait, like a million hectares gets cut in Indonesia, so let’s start with that.’ 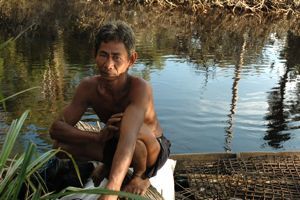 How much say will forest people have in decisions that affect them? That part of the Norway-Indonesia agreement remains to be worked out. (Photo: Mitra Taj)

TAJ: Diplomat Al Farisi says Indonesia hopes the United States is watching the agreement with Norway and will consider something similar. President Obama has been expected to talk about forestry when he meets with President Yudhoyono, but he’s cancelled previous plans to visit Indonesia three times… most recently because of the oil spill in the Gulf. Al Farisi:

FARISI: We can understand because the domestic issue President Obama is now facing is also an issue shared by Indonesia. It’s about the environment, so we understand it. And, we still hope we can find some day, some time to welcome Obama to visit to Indonesia.

TAJ: For Living on Earth, I’m Mitra Taj in Washington.


Click here for more of Living on Earth's coverage of avoided deforestation.

Indonesia's letter of intent with Norway

Learn more from WRI about forests and international climate talks.

Click here for a skeptical view of the partnership.