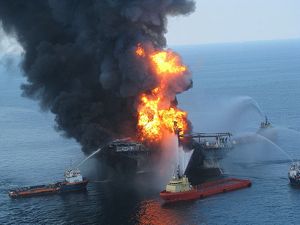 The Obama administration is taking a three-pronged approach to deal with the oil spill in the Gulf of Mexico: reforming the Minerals Management Service; creating a commission to investigate the spill; and installing a moratorium on deep water drilling in Gulf until risks are better understood. Bruce Babbitt, the former Interior Secretary during the Clinton administration, tells host Jeff Young what he thinks of the president’s plan.

YOUNG: From the Jennifer and Ted Stanley studios in Somerville MA, this is Living on Earth. I’m Jeff Young. The Obama Administration is changing the way the government deals with offshore drilling. The president’s oil spill commission gained clout when the House of Representatives voted to give it power to subpoena witnesses and records for its investigation of what went wrong in the Gulf. And the Interior Department is overhauling the troubled agency that regulated drilling.

The notorious Minerals Management Service has reemerged as the Bureau of Ocean Energy, with a tough new director. But a former Interior Secretary says more needs to be done. Bruce Babbitt led the Interior Department for 8 years under President Clinton. Mr. Babbitt says the core of the problem is that the same department still collects royalty revenues from drilling and enforces environmental rules, even after the administration’s changes to the system.

BABBITT: I don't think that goes far enough, I really think these are conflicting functions. One is promoting the industry the other is environmental regulation. My feeling is there should be more separation and that it would be appropriate for Congress to legislate a larger role for the Environmental Protection Agency, the EPA, must have a strong role in environmental regulation early on in the permitting process.

YOUNG: This seems to me a fairly remarkable statement coming from a past secretary of the Interior Department. You’re essentially saying, that shop that I used to run, they shouldn’t be doing this.

BABBITT: Yes but let me make clear that’s not a criticism of Ken Salazar or the interior department. I just think that as our perception has quickened by of this event, it’s time to step out of the narrower role.

YOUNG: And you think giving this duty to EPA will make things better? Why, exactly?

BABBITT: Because EPA does not have conflicting responsibilities. They do not have responsibility to set up the process of permitting, to collect the revenues to, in effect, be advocating for the industry. EPA’s job is pure environmental regulation. And, look, the stakes are really high here, and the regulation has lagged behind the risks and the pushing of this technology into deep waters. So I think we need to take a fresh look.

BABBITT: Well I think it’s an important opportunity to focus on the major structural changes and legislation, to set these issues straight. And my advice to the commission as it begins is, don’t get lost in the weeds. There are a lot of technical details, there will be investigations on investigations, which will ultimately illuminate much of that. Focus on the 3 or 4 major changes going forward in the structure of the regulatory system, in how the Gulf ought to be restored, and in forcing a safety culture on the industry itself.

YOUNG: The president has also talked about the need to address the longer-term damage to the Gulf ecosystems, a lot of it from oil and gas drilling. What do you think of that? I mean, we’ve been hearing about wetlands loss in Louisiana for a long time now and no one seems to have really come up with a way to address that on the scale required. Do you think now is the time that we might actually do something about that? 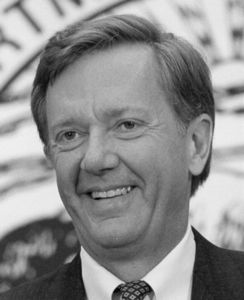 BABBITT: You know, in the sweep of history across the Delta, the damage caused by BP, as ugly as it is, is only a modest part of a larger trajectory of damage that has been out there for decades through the dredging of the wetlands, all of the various spills, the use of toxic chemicals. There are 30,000 miles of pipelines in and around the Delta and a lot of them have not been well constructed, and it’s time to hold the participants accountable, in my judgment, for funding a long-term restoration program. It shouldn’t be paid for by the taxpayers of the United States, it should be paid for, by, I think, most appropriately, by putting a small surcharge on all the oil and gas production that’s coming out of the Gulf. It seems to me, perfectly fair to me to say, ‘Now that this opportunity is at hand, it’s time for the people who caused it to pay to fix it up’.

YOUNG: Do you think the president erred, by embracing an expansion of offshore drilling, before he had really addressed the changes that needed to be made, within the Department of the Interior regarding offshore drilling?

BABBITT: No, I can’t say that. Look, you know it’s awfully easy to look back and, you know, say what might have been done differently. The fact is, for all I know, this accident could have happened on my tenure. The administration is on top of this issue now, in my judgment. Important decision are going to have to be made going forward and now is the opportunity to say, ‘Let’s urgently get on with making all these changes,’ many of which will be opposed by the oil and gas industry, many of which will require congressional action, right now, not waiting for a commission report, but right now.

YOUNG: There is so much focus right now on the Gulf, I’m kind of amazed at the level of public interest and public anger and public sadness about what’s happening in the Gulf. It seems like a classic teachable moment, but I’m wondering, will we really learn lessons here? What do you think?

BABBITT: It is a teachable moment and it is a really important opportunity to make major changes, to get a congress involved in legislating changes in the regulatory structure, in portioning responsibility for the long-term damage to the Gulf and financing the clean up, and moving quickly on the energy legislation that’s in the congress including, importantly, pricing carbon to sort of jump start the movement away from dependence on fossil fuels, improving our national security, getting a handle on global warming, and using this moment to get started.

YOUNG: Former Arizona Governor and former Secretary of the Interior Bruce Babbitt. Thank you very much.

BABBITT: Thank you, my pleasure.

YOUNG: There’s more of our interview with Secretary Babbitt at our website LOE.org.


The White House on the BP Oil Spill

Click here to listen to an extended interview with Secretary Babbitt.

The Department of the Interior on Restructuring Offshore Oil Regulation