Methane in the Gulf 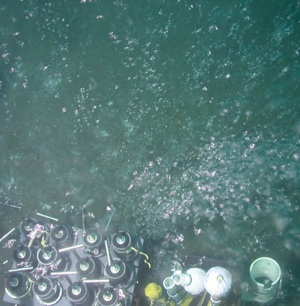 It’s not only oil that’s gushing into the Gulf of Mexico. . . scientists report huge amounts of methane gas are flowing into the ocean as a result of the BP drilling accident. Texas A&M Oceanography Professor John Kessler explains to host Jeff Young how methane affects ocean chemistry and water oxygen levels.

YOUNG: BP says its containment system has been capturing about 20,000 barrels of oil a day from its ruptured well – and they expect to collect about 53,000 a day by the end of June. Latest figures suggest as many as 60,000 barrels a day are shooting out. It’s not just oil that’s escaping – huge amounts of the gas methane are mixed in. And big questions are bubbling up about methane’s effects on the ocean. John Kessler is a chemical oceanographer at Texas A & M University. Professor Kessler’s just back from a research trip that took him into the shadow of the giant equipment at the site of the spill.

KESSLER: It’s just massive; it’s like they’re orchestrating some ballet dance of sky
scrapers out there. The Enterprise containment ship was, really, the main vessel that was siphoning up the oil and natural gas, separating off the oil from the gas component, flaring off the gas, containing the oil, and that’s kind of a standard practice, but just the shear magnitude of the gas flare…it sounded like there was a jet engine roaring over top of us the entire time in this really almost war zone-like atmosphere.

YOUNG: So they’re burning off a lot of gas, and that’s your main interest, is the gas, the methane, right?

KESSLER: That’s correct. Some of the reports that BP is putting out right now, where they sample the material that’s coming right out the riser pipe, is that it’s about 40% by weight of natural gas, the remaining component being oil.

YOUNG: When you measure the methane in the water, how much are you finding?

YOUNG: What does that do to the water column if you have that much more methane in it?

KESSLER: Methane itself, especially when it dissolves in the water, can actually be a food source for various microorganisms. When these organisms consume methane, they also consume oxygen from the water. So if we’re populating, now, the bottom waters, with 100,000 times more methane than we normally would have, what’s that going to do to the amount of dissolved oxygen? Is there going to be a feeding frenzy? And be a severe drawdown in this dissolved oxygen content, and then potentially have harmful effects on the marine ecosystem?

YOUNG: How long do you think the methane will stay in the water? Is there the potential here that it hangs around and we could be looking at potential long-term impacts?

KESSLER: Methane is a relatively soluble gas. Just like dissolving sugar in a cup of hot tea, you’re going to dissolve this methane down there as well. Which is really I think the explanation for why we’re seeing so much in the deep waters and relatively minor amounts in the surface waters- it’s just dissolving so quickly. 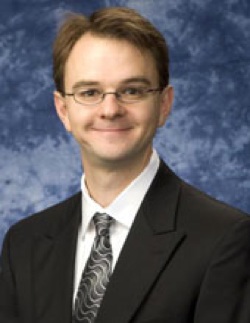 But as it stays down there in this natural dissolved state, it has the potential for being there for decades, and that’s where I think we really start coming into a problem with oxygen utilization and oxygen drawdowns. Even if we’re seeing relatively minimal ones presently, how is this going to change now in the coming years and so forth and so on.

YOUNG: So how concerned are you that the effect of all this methane in the water might be that we would end up with large areas of low oxygen in the Gulf of Mexico?

KESSLER: I’m actually very concerned about that. The levels of methane in the deep waters that we’re seeing are unbelievably high. I’ve never seen levels like this in the ocean before. We’re starting already to see some drawdowns in oxygen, and we’re trying to see if we can fingerprint if that methane—that drawdown- is related to these large methane inputs. But certainly, the consumption of all this methane, by the microbial life in the water column, has the potential to lead to significant drawdowns.

And so what this really requires is a dedicated effort to go out there, to measure methane consumption rates, and see how those are changing with time, not only in the coming days, in the coming weeks, but certainly on the much longer time scales, a half a year, year and even say 2, 3, 4, 5 years down the road.

YOUNG: Now, long before this spill, the methane that’s down at the sea floor was already something of interest to you and other scientists because of the potential for that methane to be released into the atmosphere, where it would become a greenhouse gas and contribute to global warming. Does what’s happening now in the Gulf give you some sort of opportunity to address those other questions about deep-sea methane?

KESSLER: Very much so. This is a rather unique, rather exciting environment for us. The ocean floor is just an absolutely enormous reservoir of methane. And there are implications that this reservoir has erupted its methane in the past, contributed this methane to the atmosphere in certain abrupt climate change events. This anthropogenic event that we are currently in the midst of, actually simulates one of those previous eruptions on how it is emitting its methane to the water so rapidly. And it enables us to look at it as an analog in a natural laboratory to gain some insight into what happened in the past and then also to enhance our predictability on what might occur in the future.

YOUNG: Chemical oceanographer John Kessler talking to us about methane in the ocean waters around the Deepwater Horizon spill. Thanks very much.

KESSLER: My pleasure, thanks for having me.


Click here for LOE's story Getting to the Bottom of Methane