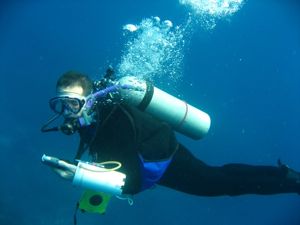 YOUNG: BP has pledged $500 million dollars over ten years to support science in the Gulf of Mexico to better understand the effects of the spill. Scientists say that’s badly needed. The spill presents major new challenges for research already hampered by years of chronic underfunding. Even getting basic data about how Gulf currents will carry the oil, is tough. University of South Florida oceanographer Robert Weisberg once had 14 buoys in the Gulf measuring currents and temperature, but that was before years of government budget cuts.

WEISBERG: Right now, I'm down to 4 buoys that report in real time. Unfortunately, with the reduction in resources, we don't have spares, we don't have enough ship time to go out there. And, so, when things break, they break. And so, not all of the information is even reporting in real time. If this oil spill demonstrates one thing, it's the need to have those measurements in place.

YOUNG: Spills aren’t the only way oil damages our oceans. A special section in the journal Science focuses on the effects of burning oil and other fossil fuels. University of North Carolina marine ecologist John Bruno co-authored a paper that warns “Climate change is clearly and fundamentally altering ocean ecosystems.” Professor Bruno joins us now on the phone from Brisbane Australia where he’s doing research. Hello, Professor!

YOUNG: Now that statement jumped out at me. “Climate change is clearly and fundamentally altering ocean ecosystems.” Is. That’s present tense. You’re talking about things that are already happening.

BRUNO: Yeah absolutely. And it’s funny, I didn’t expect to be studying climate change in my scientific lifetime. I thought I would be warning people about it, and, you know, doing some work on its implications, and it’s just remarkable, to all of us in the field, how quickly things are progressing.

YOUNG: So give me some examples. What are you able to observe and see, right now, in the oceans that’s due to climate change?

BRUNO: So a really big one is changes in species distributions. There’s a whole new suite of species in the northern Gulf of Mexico that weren’t around a couple of decades ago, so there’s snapper, and grouper, and parrot fish, things that you commonly see on coral reefs that you commonly see to the south, down on the Yucatan Peninsula and into Belize. We’re seeing shifts in productivity, and that mostly has to do with changes in wind patterns which influence the mixing of the oceans.

So when the ocean is really well mixed, you get very cool, very nutrient rich water being moved up from the deep into shallow waters and that’s critically important in fueling primary production, so that is the growth of phytoplankton, these very small single-celled plants that fuel the whole ocean food web. And that’s a big concern for fisheries managers because they’re seeing fisheries productivity drop, we think, in part, due to that problem.

YOUNG: You have a few statements in here that, although they’re carefully phrased, they really jump off the page as red flags. “Recent evidence suggests that there is now a growing risk that several thresholds will soon be exceeded.” What are we talking about there?

BRUNO: Well here’s a simple example of a literal threshold. So we all know that the Arctic sea ice is melting at a really high rate. North American, European shipping companies are planning on using it as a regular shipping route over the next couple decades, so by 2030, 2040, you’re going to be able to take cargo ships right across the northern passage.

That’s going to allow species from the northern Pacific to move into the North Atlantic and we’re talking literally thousands, probably tens of thousands of species, will migrate from one ocean to another, and these biogeographic provinces have been isolated for over a million years. So that’s literally a tipping point; once that channel’s open, it can never be closed and there’s just going to be profound consequences for ecosystems in the north Atlantic.

YOUNG: Do we have a way to predict how ocean ecosystems are going to be changing as these trends accelerate?

BRUNO: We really don’t. So we’re talking a lot now in the field about something called “no analog communities,” and it’s kind of a sciency jargon word, but what it means is we’re expecting situations that really have no precedence in geological records, so we’ve never had that given combination of environmental conditions and species mixing together. So we really don’t have any way of knowing how ecosystems will interact a couple centuries out.

YOUNG: Now, a lot of scientists, I think, would have pointed out these things that are happening and have left it at that. However, you make recommendations here about what should be done. And one of your recommendations says, “Aiming to reduce atmospheric concentrations below 350 parts per million of CO2 must be an international imperative.” Now why 350 parts per million?

BRUNO: The best science we have so far suggests that that’s really the safety zone. So going beyond 450, and that’s the concentration of carbon dioxide in the atmosphere, particularly going beyond 500, 550, we’re really getting into high-risk areas. And, you know, we can’t say for sure that catastrophic things are going to happen, but they become very likely.

There is a lot of concern that going beyond 450 parts per million will acidify the oceans to a degree that calcification will become very difficult for things like corals, that create reefs, but a whole range of animals make calcium carbonate skeletons, and are really profoundly affected by ocean pH, so things like oysters, and mussels, you know things we eat, blue crabs that we catch in the Chesapeake Bay.

So all these organisms are being affected by these, what seem like to be relatively subtle changes in ocean chemistry to us, but you know it’s a really big deal if you’re making your living and defending yourself with this calcium carbonate that you extract from sea water and create your defenses with.

YOUNG: We are so focused right now on the oil spill in the Gulf. Does this seem to you a moment where a message like this might be able to get through, when in the past it might not have?

BRUNO: You know, possibly- I’m actually worried that the opposite is happening. That the oil spill is really obscuring the thing we ought to be focusing on. There’s pictures every day of oiled pelicans, and believe me it’s heartbreaking, but it’s frankly trivial compared to the effects of the burning of the fossil fuels on ocean ecosystems. So the oil spill is obviously a tragedy both for people and the environment there, but the Gulf is going to heal. And in 100 years there probably won’t be any trace of that oil spill, nobody will remember what BP is, but the effects of all the fossil fuels that we’re burning today will still be with us.