Up On the Roof 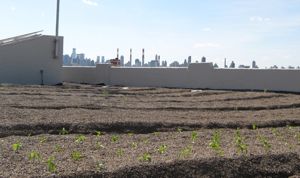 It took a crane, a million pounds of soil, and lots of people power, but a group of young farmers called the Brooklyn Grange have opened a commercial farm on top of an office building in Queens, New York. Their goal is to provide local, healthy food to city residents and restaurants and to prove that urban farming is a viable enterprise. Stephanie Hughes reports.

YOUNG: Sure it’s called the Big Apple, but you don’t think about agriculture when you think of New York City. Yet as recently as the 1880s, Brooklyn and Queens were full of green acres that provided much of the city’s produce. And now, a group called Brooklyn Grange is trying to recapture the city’s agricultural past – by colonizing its rooftops. From New York, Stephanie Hughes has the story.

HUGHES: On a noisy street in Queens, industrial buildings stand next to car dealerships. The elevated subway train rumbles nearby. With all this concrete, there’s not much room for plant life. To find that, you have to go 7 stories up.

[PAIL HANDLE CLINKING AND WATERING CAN BEING FILLED UP]

FLANNER: See how wilty some of these look? Fresh transplants need a lot of water in this hot heat.

HUGHES: Ben Flanner is tending to some sweet pepper seedlings. They’re among the tens of thousands of plants on his new rooftop farm.

FLANNER: We planted a whole lot of tomatoes. We’ve planted Swiss chard, kale, eggplants. We just started putting in cucumbers. There’s a lot of radishes in, there’s sugar snap peas. There is lettuce. 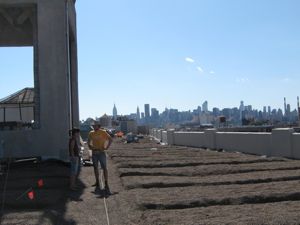 HUGHES: The rooftop is 40,000 square feet—that’s close to an acre. It needs to be big in order to work as a for-profit enterprise, and Flanner is relying on the surrounding community to make the business work. He’s going to sell vegetables to people who work in the building, and will set up a farm stand close by. He’ll also sell to local restaurants. Giuseppe Falco owns the nearby Italian restaurant Vesta, and has made several special requests.

FALCO: My favorite thing, which is going to be amazing—I hope that he gets a great harvest out of it—is something called a cucuzza, which is a Sicilian squash of sorts, and, it basically looks like a zucchini. And they tend to be about 4 feet long sometimes.

HUGHES: Those cucuzzas will sprout out of a lightweight soil mixture. A million pounds of it was lifted on top of the building with a crane. Underneath that soil, the roof is lined with a series of membranes. 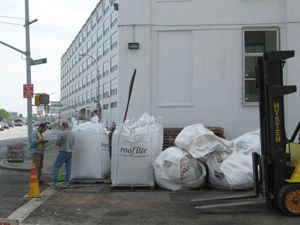 The farmers used a crane to lift bags of lightweight soil mixture to the roof.
(Photo: Stephanie Hughes)

COLE: The first layer here is root stop membrane. So, this keeps the roots of the plants from penetrating the surface of the roof.

HUGHES: Anastasia Cole is another farmer working on the project.

COLE: We've got drainage mats here, and we put this thin layer of felt on top of the drainage mat to prevent them from filling up with dirt. And, that way, if it rains a lot, and the plants don’t want all the water that they’re getting at the moment, it sits in the drainage mats, and the soil keeps it cool enough that it doesn't absorb. You can see some of the moisture down there from whenever it last rained.

HUGHES: The roof will hold not just vegetables, but also beehives, which will yield honey. At some point, Ben Flanner also hopes to have livestock, including chickens.

FLANNER: They require a fair amount of space, and it could be great to have an allocated chicken area and collect their eggs every day. And then also there’s a great circular system, with the droppings from the chickens—you can use that as natural fertilizers and manures.

HUGHES: He believes farming could become a regular part of urban living. Anastasia Cole says city dwellers to see where their food is coming from.

COLE: This building is a great example of something that really could turn into an ecosystem, I mean, people bringing produce home so, you know, it's not being shipped in on trucks. When we start our compost program up here, if people want to bring their scraps in, it’s less trash. We’re helping cool the building in the summer and keep it warm in the winter.

HUGHES: The farmers are also encouraging people who work in the building to come look at the plants. Kathy Kocian is the co-owner of a printing company called Xweet.

KOCIAN: You know, we’re all about fresh vegetables and this is just a great thing to do, to utilize the roof of a building like this. Yeah, so we'll be coming up here and purchasing all types of stuff to cook up. [LAUGHS]

HUGHES: And for those customers who aren’t nearby, the farmers will make deliveries – by bicycle, subway, and occasionally, with a car that runs on vegetable oil.

FLANNER: The car’s a 1979 Mercedes, and it’s converted diesel. So, theoretically, if we make a delivery in Manhattan, we can pick up some grease as well. 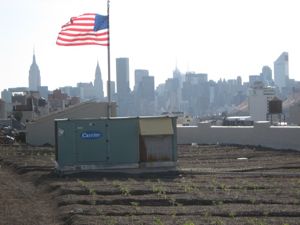 A farm with a view. (Photo: Stephanie Hughes)

HUGHES: The Brooklyn Grange farmers hope to expand, and have farms not just in Queens, but throughout the entire city—and to create a model that could be used by people in other towns. For Living on Earth, I’m Stephanie Hughes in New York.