Warning: mb_convert_encoding() [function.mb-convert-encoding]: Illegal character encoding specified in /home/phoenixsoap/loe.org/docs/staff/content/showtool.html on line 104
“Shell Games” provides a look at the growth of wildlife smuggling through the plight of the geoduck clam (Photo: Tom Reese).

Hitmen, smugglers, and clams? In his book "Shell Games", Craig Welch tells the story of environmental detectives who are trying to track down smugglers of the geoduck (GOO-EE duck) clam. Host Jeff Young talks with Welch about how the global black market for wildlife has increased the demand for species close to home.

YOUNG: In the muck at the bottom of Washington’s Puget Sound there is money to be made. Big, ugly clams called Geoducks are bought and sold on an international, and sometimes illegal, market that fetches millions.

Reporter Craig Welch dove into the Geoduck fishery and found a window into the world of wildlife smugglers and the dedicated detectives trying to track them down. The result was his book, “Shell Games, Rogues, Smugglers and the Hunt for Nature’s Bounty.” The tale of poached clams and hard-boiled detectives reads like a mix of Sam Spade and “Wild Kingdom.” Craig Welch, welcome to the Living on Earth. 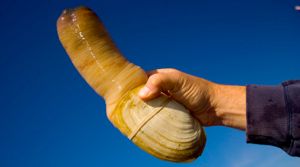 The geoduck clam is indigenous to the waters of the Pacific Northwest, but becoming an increasingly popular seafood delicacy in Asia (Photo: Natalie Fobes).

WELCH: Thank you for having me.

YOUNG: Let’s start with the Geoduck. Tell me about this odd animal.

WELCH: The Geoduck is a fist-sized clam that’s found in great numbers only in Puget Sound and just off the coast of Vancouver. And this clam looks like something, that, uh—well if you’ve seen it once you’ll never forget it.

WELCH: They’re quite a bit phallic. They have a siphon that can stretch about the length of a man’s arm. And yes, it looks like things you’re not supposed to talk about on the radio.

YOUNG: [laughs] But they’re fascinating things, they spend almost their whole lives down in the muck at the bottom of the sound.

WELCH: They essentially cocoon themselves in the muck below the water. And, they will stay there for their entire lives, which could be as long as 150 years. And, divers actually go, dig these creatures out, and they will pack them in mesh bags, and haul them up to a boat, and then immediately ship them overseas so they are sold live to China, Hong Kong and Japan where they are served as a seafood delicacy.

YOUNG: And, enough people wanted to get these things that there’s an illegal fishery as well. Going after this in all kinds of crazy and creative ways. 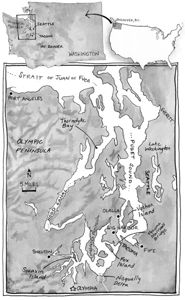 Puget Sound, off the coast of Washington State, is primary geoduck habitat, and a hotbed of criminal activity (Photo: Whitney Stensrud).

WELCH: Absolutely. I mean the bottom line is this clams are only found here, and they’re really popular in a part of the world where both wealth and population are growing. So there’s a lot of money to be made, and the rules governing harvest are very conservative. Therefore, the supply is not as big as the demand. There’s a great demand for folks who want to go out of their way to take them.

WELCH: Uh huh. “Thieves traded clams for Vicadin, and swapped them for un-taxed cigarettes. Dozens of poachers were on the water every week, some smuggling tens of thousands of clams. The cops suspected the value of the theft probably surpassed several hundred thousands of dollars a year. Later they would realize that wasn’t even close.”

YOUNG: The main characters here are people who are on both sides of the fence. You have the detectives, and also the informants, the people who are in this world of the illegal trade.

WELCH: Yeah, the story sort of started in the mid-90s with a really sort of larger-than-life fisherman who started noticing that there was crime going on all around him and that he was feeling cheated. He decided that it was in his best interest to go and talk to the police, and suddenly you have this relationship that would last for many, many years between this gregarious informant and these wildlife cops.

YOUNG: And, I guess as things will, in the waters of the Puget Sound, things get pretty murky with that relationship.

WELCH: Yes, they start sharing information with federal agents for the National Marine Fisheries Service who police both the international and intra-state trade in wildlife. And so they spend a year gathering information, and they’re all set to start taking cases to federal prosecutors when the informant calls one day and says, “there is a gentleman who has called me today, who said that he would like to blow up one of his rivals in his truck.” And suddenly this has just become something much more serious than they ever anticipated.

YOUNG: It’s amazing. This is all about these big ugly clams and this guy is willing to blow up his competition, but then he decides he’s just gonna, he’s gonna work him over, right?

WELCH: Yeah and here’s where it really gets strange. So there’s this series of phone calls between the informant and this broker and he says he’s going to hire a 300-pound hit man from LA, a guy he claims was a retired sheriff who had helped train Robert Deniro in the movies. And, the federal agents finally decide that their safest bet is to find a way to get the informant to ask the broker to hire him instead. And from there it works almost according to plan. The federal agents eventually connect with the 300 pound hit man from LA, and they’re going to have him testify before a grand jury that he was approached by this guy, and they get him to come up to Seattle and he gets off the plane and he is carrying a stuffed teddy bear, because it turns out he is actually afraid of flying.

“Shell Games” provides a look at the growth of wildlife smuggling through the plight of the geoduck clam (Photo: Tom Reese).

WELCH: And at this point, the federal agents aren’t sure what to make of this.

YOUNG: The would-be hit man has his own teddy bear.

WELCH: Has his own teddy bear.

YOUNG: What do you think the wildlife officers make of their work? In some ways they seem like they’re very proud, in fact one of them passed up an opportunity to work in the FBI, he thought this was more important, more elite.

WELCH: And I think that’s true of a lot of them. I think the gentleman who had a chance to work at the FBI, his basic argument was, the FBI has 12, 13,000 federal agents and his agency, the US Fish and Wildlife Service, had about 200. I don’t think they feel they get the respect they deserve because people think, “oh you’re just chasing people who are stealing clams. How tough can it be?” Their counter-argument is, if you’re a federal agent and you’re trying to stop a drug dealer, every time you see heroin, somebody is committing a crime. Heroin is illegal. Well Geoducks are only illegal if they’re taken from the wrong place at the wrong time by the wrong people, out of season. In some ways their job is a little bit more difficult because each of those rules varies from species to species.

YOUNG: And this trade for wildlife, not just the Geoduck of course, but wildlife smuggling, it’s one of the big ones right behind drugs and human trafficking. 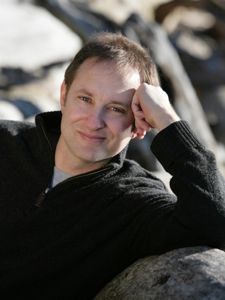 “Shell Games” author Craig Welch has been the environmental reporter for The Seattle Times since 2000 (Photo: Meryl Schencker)

WELCH: Exactly, exactly. Drugs, human trafficking, and guns, then 3 or 4 you have wildlife trafficking. And I think most people have always thought of wildlife trafficking as stuff from Africa and Indonesia going into the West, into Europe and the US. But people all over the world can find an interesting product from nature just about anywhere, and that means that you have rattlesnakes from New York put into the panels of cars and driven across the border to Canada and then shipped around the world, you have sturgeon eggs from the Sacramento River shipped over to Eastern Europe. There is pretty much something in every state that is now taken illegally from the US and shipped abroad.

YOUNG: It is so hard to police this. Did you come away with the impression that this is kind of a hopeless cause? My guess is they’re barely making a dent in the smuggling.

WELCH: Well, and that’s their guess too. Most of the officers I talked to said that they suspect that they are aware of maybe 10% of the wildlife crime. I cover in this book everything from black bear gallbladders to abalone poaching to butterfly thieves. In some cases it’s a really strange world, but it’s not particularly ecologically sensitive. In other cases, abalone for example, or moss in national forests, it’s entirely possible for people to actually take all, or close to all, of a particularly rare species and sell it abroad. So, you know, sort of the variety and scope of the trade is unnerving enough, I think it’s very difficult to imagine them really putting a dent in things.

YOUNG: You know, some might look at the situation with the clam, the Geoduck, and say, ‘well, it’s not endangered or threatened, why are we limiting the trade in the first place?’

WELCH: I think that’s a fair question and I think the answer makes sense, too, which is: that’s how we prevent such a thing from becoming rare and endangered. You know, here in the Pacific Northwest we’ve had our experiences with over-fishing. We now have several species of salmon that are endangered in Puget Sound because we did not actually do a good enough job early on trying to control fishing. We have the same issue with Geoducks. So if we actually, sort of, set harvest rules, early on, we can make sure that we’re going to take care of these creatures safely over the long term. That, in a sense, helps to create demand for the illegal market, but what’s the alternative?

YOUNG: The book is called “Shell Games.” Craig Welch, thank you very much.