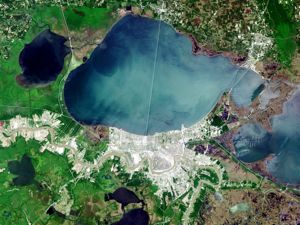 The oil in the Gulf of Mexico has now spread to the shores of all the Gulf States. And, for the first time, tar balls have been confirmed in the southeastern portion of Lake Pontchartrain, an inland lake that abuts the city of New Orleans. Host Jeff Young talks with Robert Thomas, chair of environmental communications at Loyola University, about the significance of this spread — both ecologically and culturally.

YOUNG: From the Jennifer and Ted Stanley studios in Somerville, MA this is Living on Earth. I’m Jeff Young. The Gulf Oil disaster has now reached some historic milestones. By government estimates this is now the biggest accidental oil spill in maritime history.
The recent report of tar balls on the Texas coast means oil has now reached all five US Gulf states.

And in southern Louisiana, the oil passed another important threshold — the entry to Lake Pontchartrain. Professor Bob Thomas chairs environmental communications at Loyola University in New Orleans, a city that worked hard to clean up Lake Pontchartrain. Bob Thomas, welcome to Living On Earth.

THOMAS: Good to be with you.

YOUNG: Now help us out a little with the geography, paint a little mental map for us because this is quite a ways from the open water of the Gulf, isn’t it?

THOMAS: Well, it is. Imagine a large oval that’s 40 miles long and 24 miles across. It’s sitting right on top of New Orleans. To the east there are two openings one is called the Rigolets. The other one’s called the Chef Menteur. And so water comes in from the Gulf, goes through lake Catherine then flows through lake Borgne, comes through either the Rigolets or the Chemantauer and enters Lake Pontchartrain. 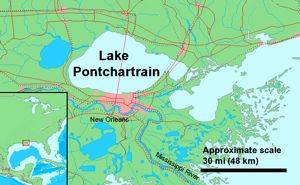 YOUNG: How did the oil get all the way up there?

THOMAS: Ah, wind driven probably. We’ve had sustained southeastern winds over the last number of days. It’s not an unusual thing at this time of year, and it just blows seawater back up into the lake. So the oil has just traveled in with everything else.

YOUNG: I guess it must be a real blow to think, gee, if the oil can get into Lake Pontchartrain, where can’t it get?

THOMAS: Well, that’s absolutely true because think of the filters that it’s had to work through to get there. It’s gone though a couple of coastal lakes, narrow entrances into the lake system, and then, we had people out using nets trying to capture as much as they could. The reports are that they actually scooped out 1000 pounds of oil.

YOUNG: What do you think that amount of oil means for the fragile ecology of the lake itself?

THOMAS: Well, I think what’s happening out there right now doesn’t seem to be a major threat at the moment. Most of the oil that’s coming in there is very weathered, so to speak, it’s been in the water a long time, it’s relatively inert. But, that said, what we’re very concerned about is: is this the tip of the iceberg. What quality of oil will come behind it, how much of it will come in, and what impact will that have on this humongous estuary that is a major component of the nursery grounds for the fisheries off coastal Louisiana.

YOUNG: So far though, it sounds like its as much a psychological blow as anything.

THOMAS: Yes it is. And that’s something that people are not talking about enough. This entire oiling along the Northern Gulf coast is a huge psychological weight around people’s necks. People just don’t know what the future holds, but what they do know is that it’s destroying jobs for a lot of people, which just wrecks the economic web down here along the coast. It’s just destroying what we consider such a wonderful, wonderful ecosystem. And because it’s doing those two things it’s starting to etch into our culture and a feeling of well being that coastal-living people have. So people are really, really bothered by this. Well beyond the direct impacts.

YOUNG: Give us a sense of the importance of Lake Pontchartrain to New Orleans’ citizens.

THOMAS: Well, first of all, New Orleans is located where it is today because of Lake Pontchartrain. Going back to the 16 and early 1700s, they were looking for a shortcut to the river. And so what they did is they came across the coast, entered Lake Pontchartrain, and found a little bayou called Bayou Saint John now, they went up and they portaged one mile to the river. And, so when they made that discovery they say well look here, this place on the river, this is where we’re going to build a city. And they named it New Orleans.

It’s a place that historically was the recreation place for New Orleans. If you go back through the years, everybody has a story of a family going out to Pontchartrain beach, which was an amusement center, or going to the restaurants at West End. And so it’s sort of entrenched in the lore of New Orleans. And then, on top of that, it is an estuary that serves as the nursery grounds for a large percentage of the commercially important species that we feed on down here. And it’s just a beautiful place.

YOUNG: You know here we are just a little more than a month away from the 5th anniversary of Katrina. How does that anniversary, and the on-going oil incident, come together to affect people there?

THOMAS: Well, it’s like what you’d call a double-whammy. I mean, we’ve dealt with Katrina, and people are just getting their lives back together. And then just as you’re standing up, just as you’re starting to right yourself, and you’re getting off the ground, you get hit again square in the face. It hurts a lot more the second time. The second time is taking away your future. It’s absolutely taking away your livelihood and nobody knows where this is going to end.

YOUNG: Bob Thomas at Loyola University in New Orleans, thanks so much.

THOMAS: Good being with you.