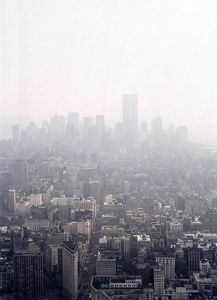 Smog in New York City. The average coal-fired power plant spews as much ozone-forming nitrogen oxide as a million late-model cars, according to the Union of Concerned Scientists. (Photo: Anke L)

The EPA has rewritten its rule to force deep cuts in sulfur dioxide and nitric oxide emissions from power plants, a move expected to save tens of thousands of lives and billions of dollars every year. Host Jeff Young talks with University of Maryland Law Professor Bob Percival about the mounting science on smog and soot's health impacts, and why the regulation has been so tough to put in place.

[SOUND CLIP] LOCAL WEATHERCASTER: The heat is on, and for most of Monday, so too was an air quality alert for most of western New York…

YOUNG: Parts of a dozen eastern states were under orange or—in a few cases red—air alerts. A big part of the problem comes from other states to the West.

[SFX] POWER PLANT SOUND up briefly then under]

YOUNG: Old coal-fired power plants, like this Dominion facility in West Virginia, send pollution downwind, with devastating health effects. Now the U.S. EPA has proposed regulations to deal with this interstate transport of pollutants—a problem that’s long vexed environmental regulators. Bob Percival has followed the subject for decades. He directs the environmental law program at the University of Maryland.

PERCIVAL: Well, this rule is going to have enormous health benefits. EPA estimates that it will save between 14,000 and 16,000 lives every year. It will also prevent 23,000 heart attacks, 21,000 cases of acute bronchitis, and almost a quarter-million aggravated asthma cases every year. 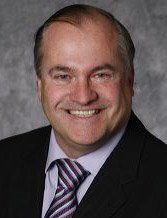 YOUNG: When you look at those health benefits and you realize that the science on this is really sound, it makes you wonder, why has it been so difficult to make the changes to achieve these kinds of health benefits? Cause this has been a long, hard road to get here.

PERCIVAL: Well, it really required a lot of political will to finally invoke the provisions of the original Clean Air Act that were designed to prevent interstate pollution like this. When environmental groups tried to go to court to force action, the courts focused on how uncertain the fate and transport of pollutants were, particularly under the old air quality models we had that made it very difficult to trace what pollution causes what damage in other states. This rule, when it was first issued in 2005, it was challenged in court. And in 2008 the courts sent it back to EPA and said you need to redo the rule.

Now, we have much better data, much better evidence of the health effects, and now EPA expects that it will go into effect in 2012. So it’s a very, very long process before rules like this are adopted.

YOUNG: Do you think that the new rule, as EPA has re-written it here, will pass muster in the courts?

PERCIVAL: Yes, I think it will and I think there are two clear indications of that. One was that, even though the courts stuck down the rule in its July 2008 decision, it agreed subsequently to let the rule stay into effect in order to give EPA time to tinker with the rule and re-write it in a way that would satisfy the demands of the existing law. And secondly, the agency very clearly targeted this rule to the objections the court has made, so I think this rule stands a much, much better chance of being upheld in the courts.

YOUNG: So how do you think those regulated utility companies are going to respond to this? Might they do away with some coal plants here? 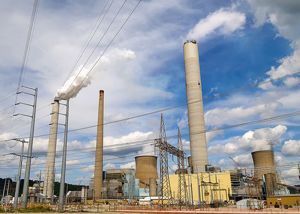 YOUNG: So, downwind this is going to mean significant health benefits. What is it going to mean upwind? What does this mean for the states that produce this pollution?

YOUNG: However, somebody has to pay that almost three billion dollars cost. Does that cost go onto the ratepayers in those upwind states?

PERCIVAL: That probably will be the case. It’s something that these utilities should have been planning for all along.

YOUNG: And, a lot of this comes back to that aging fleet of coal-fired power plants that, a lot of people think, should have been sent out to pasture many years ago.

PERCIVAL: Yes we made a basic mistake when the Clean Air Act was passed in 1970. We assumed that we could grandfather in the existing plants because their useful life was not that long and that they would soon be returned and replaced by plants that had to comply with much tighter standards.

Unfortunately what happened was that created an economic incentive to keep the old grandfathered plants in operation as long as possible. So they’ve been operating for decades longer than anyone anticipated. That’s why we’re always tinkering with the act and having the agency adopt new regulatory standards, because the basic premise of the act—that EPA should guarantee that we have healthy air quality throughout the nation—remains intact and that’s something that the agency is trying to pursue here with these new regulations.

YOUNG: Environmental law professor Bob Percival at the University of Maryland, thanks very much.


EPA on transport of air pollution

The history of EPA’s CAIR rule