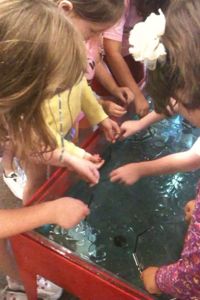 A simulation of the Gulf spill; children try to collect vegetable oil from water.

YOUNG: It’s Living on Earth, I’m Jeff Young. The oil may no longer be pouring out of BP’s well, but the oil disaster reaches far beyond the shorelines of the Gulf States. Reporter Sean Powers visited a green camp in Savoy, Illinois where a group of kids learned about the spill and how it’s affecting their lives.

GIBSON: Can you explain what’s going on?

KID: Animals are dying because of the oil spill.

POWERS: Well inland from where the Deepwater Horizon oilrig burst into flames, a group of five-to-nine year olds share what they know about the disaster with their camp counselors. They talk about everything from the explosion that triggered the spill to the oil-soaked pelicans.

KID: I can’t imagine all those little sea creatures dying…

POWERS: The kids sit in a circle as Holly Gibson, one of the camp leaders, shows photos of animals drenched in oil, and maps of the oil’s reach along the Gulf. 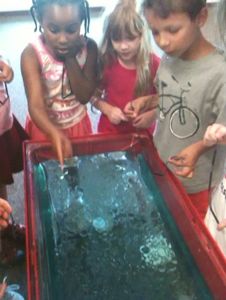 Straws stand in for booms to corral the oil: it’s not very effective.(Photo: Sean Powers)

HOLLY GIBSON: Notice it’s already down by the tip of Florida, it’s all the way up here by Louisiana, and Mississippi, and Alabama.

KID: The tip of the Florida? Oh man.

HOLLY GIBSON: It has covered a lot of the Gulf of Mexico by now.

KID: Is it ever going to come to our town?

HOLLY GIBSON: No, it won’t come up into Illinois.

KID: It won’t come up to Illinois because we’re right in the middle. There are no oceans near Illinois.

POWERS: But that hasn’t stopped this group from worrying about the oil. The kids are about to witness a simulation of the spill. Genny Gibson directs Green Camp, and she watches on as another camp leader fills a large rectangular tank of water with vegetable oil. Bubbles start to form.

GENNY GIBSON: Are those spots getting bigger?

POWERS: The kids try to rescue small paper fish from below the surface by separating the oil from the water using cotton balls and buoys made out of strings and straws.

JULIE GIBSON: Oh, you got a fish?

KID: I scooped it up out of the water.

POWERS: One camp counselor sprinkles cornstarch to solidify the “polluted” water. The kids then scoop it up with the makeshift buoys, but that’s becoming an even greater challenge.

KID: Because when we try to bring it up, it immediately dissolves into liquid, so we can’t bring it up.

GENNY GIBSON: Then it’s easier to pump up the water, and then extract it out.

KID: Ewww, it’s getting dirtier. There’s still some oil down there.

POWERS: After the experiment, the kids write in their journals about what they learned. Most of them, like nine-year-old Rachel Silvey, reflect on the wildlife strewn across shores and covered in blackened crude oil. 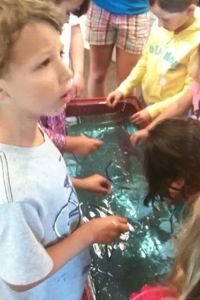 SILVEY: What I saw on the news was that we had like a mom and a baby crab and a dad. The dad was caught in a rope, and the baby and the mom were trying to escape, which they did. But the father died because the oil was coming closer, closer, and closer any minute. He got trapped in the net, and he just died. Pretty sad.

POWERS: Kids relate situations like environmental disasters to their own experiences, says Diane Levin. Levin teaches at Wheelock College in Boston, and helps educators talk about traumatic events with children.

LEVIN: When we talk to them, it’s really important to not just assume we can explain it all to them, and they’ll understand it because they do bring their understandings of families to it, or their understanding of when they get dirty what happens so they then relate what they’ve heard to themselves and it can lead to fears and worries.

POWERS: Levin says children should see both sides of the story: images of animals covered in oil and animals being cleaned up. But she also says it can be very helpful for kids to try to find solutions to fix the problem. Lucas Wood and Mira Schweitzer, both seven, are doing just that…

WOOD: I think we shouldn’t take oil from the sea. We should only take it from the land. We don’t need the oil in the ocean.

SCHWEITZER: I don’t think we need more oil at all.

WOOD: It’s like stealing from the sea life’s home….

SCHWEITZER: It actually is pretty much stealing.

WOOD: Although they don’t need it, it can kill them.

POWERS: Some of the other ideas floating around at the camp range from using a giant hammer to plug the well, to sucking up the oil with a giant vacuum, to building a wall that would capture the oil.

Sure, some of these ideas might seem far-fetched, but this group says it’s better than nothing. Experts, like Diane Levin, say children should know it’s a grownup’s responsibility to fix the spill, but kids can benefit from thinking about what they can do closer to home to take care of the environment.

For Living on Earth, I’m Sean Powers in Savoy, Illinois.

YOUNG: To see a video of the oil spill simulation, visit our website, loe.org.