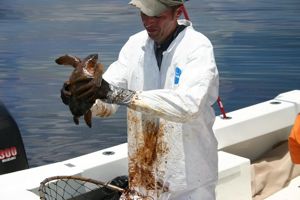 A NOAA veterinarian cleans an oiled Kemp's Ridley turtle. Most of the more than 700 sea turtles found dead since the spill are endangered Kemp's ridley turtles. In 2007, NOAA estimated 60 endangered and threatened turtles could be affected in the event of a major oil spill in the Gulf of Mexico. (Photo: NOAA/GADNR)

The agency charged with protecting key marine species approved offshore drilling plans for the Gulf of Mexico, including the BP well that has gushed out the biggest oil spill in U.S. history. Living on Earth's Mitra Taj reports that NOAA, the National Oceanic and Atmospheric Administration, failed to use its Endangered Species Act authority to prevent or prepare for the spill now threatening marine mammals and turtles in the Gulf.

YOUNG: The federal government is looking into what went wrong in the Gulf, including what the government did wrong. Administration officials say they’ve already addressed one problem area—the obscure Interior Department office called the Minerals Management Service.

MMS, as it was known, was notorious for ethical violations and lax oversight of offshore drilling. That office is being restructured and renamed. But critics say that’s not the only government agency that needs to change. Living on Earth’s Mitra Taj takes a look at NOAA, the National Oceanic and Atmospheric Administration, and its role in offshore drilling.

TAJ: Since the Deepwater Horizon explosion, NOAA, the only federal agency charged with protecting struggling sea species, has swung into crisis mode—it’s tracking oiled and dead animals, and advising actions to soften the blow to key species: sperm whales, gulf sturgeon, sea turtles (many now swimming in an ocean of oil). But three years ago NOAA helped open the door to the country’s biggest oil spill by signing off on the government’s offshore drilling plan for the Gulf of Mexico.

Brendan Cummings is senior attorney for the Center for Biological Diversity, an environmental group suing NOAA and others in the wake of BP’s accident. He says NOAA failed its mission:

CUMMINGS: They’re charged with being advocates for wildlife, and figuring out what wildlife needs, particularly endangered species, and making sure other federal agencies as well as industrial entities such as BP comply with the law and carry out their activities, if at all, in a manner consistent with protecting these species. And, instead they just say go right ahead, looks good to us, we can’t possibly foresee a problem here. 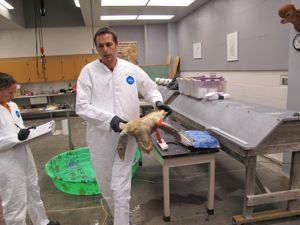 A NOAA veterinarian carries a dead endangered sea turtle to an examining table for an autopsy. (Courtesy of NOAA)

TAJ: In its 2007 biological opinion on the country’s five-year offshore drilling plan for the Gulf of Mexico, NOAA wrote that oil and gas leases would be unlikely to jeopardize threatened and endangered species, or harm critical habitat.

Nine months after NOAA’s approval, the government sold BP the right to drill the Macondo well. NOAA officials declined to comment on the record, but those familiar with NOAA describe an agency restricted by bureaucratic obstacles and budget woes from enforcing the full extent of its environmental laws.

Keith Rizzardi is an attorney who writes a blog about the Endangered Species Act.

RIZZARDI: In this case I think NOAA did a fairly good job of trying to identify potential problems, but in the context of this disaster what stood out was no effort to address an oil spill of this magnitude.

It was the glaring weakness—call it Monday morning quarterbacking if you will, but that’s what didn’t get thought about here.

TAJ: In its 2007 opinion, NOAA described a worst-case spill scenario dwarfed by the current crisis. About 300 times the amount of oil NOAA thought could spill into the Gulf over a 40-year period has gushed out in three months.

NOAA’s modest spill estimate came courtesy of MMS, the agency found so susceptible to industry influence that the Department of Interior recently tore it into three pieces. Kyla Bennett, a former EPA official and whistleblower, says NOAA never should have trusted MMS’s assumptions.

MMS employees were, in certain cases, rewarded for issuing leases. They are bean counters. Their job is to get those leases and permits out, not to stop them.

TAJ: And Bennett says fixing that problem could be expensive.

BENNETT: The reason that the federal agencies like NOAA rely on information provided by other agencies like MMS is because they don’t have the resources within their own agency to do an independent comprehensive review.

Again, Brendan Cummings with the Center for Biological Diversity:

CUMMINGS: You know, they do the big picture analysis—broad brush, pretty superficial, overly optimistic, and we would argue flawed. Then at each subsequent step, NOAA either does nothing or they just point back and say, ‘yes we already looked at it, no need for new analysis.’

And, my experience with NOAA is that when their role is purely advisory, and therefore can be ignored, they actually take good strong positions, but when they’re playing the role of enforcer, NOAA is afraid to actually ever say no.

RIZZARDI: And, the conclusion here was that Deepwater Horizon was not reasonably certain to occur. But unfortunately—it did.

TAJ: Rizzardi says amending the Endangered Species Act to include less likely disastrous events could have meant a better backup plan for the Gulf: relief wells drilled, an already-constructed “top hat” container, skimming vessels ready for deployment, and information on how to best use chemical dispersants.

While the Obama administration is deconstructing MMS, it hasn’t said anything about beefing up NOAA’s role as an environmental check on offshore drilling. But Rizzardi says the topic will probably resurface as the search for oil and gas reaches further and deeper into marine habitat.

RIZZARDI: I think the tension we’re facing is a tough one because on the one hand you’re thinking about the existence of these species, you know, whether or not our kids are going to go see turtles and whether some undiscovered deep sea coral will ever be found and become the cure to some unknown disease. And on the other hand you have at stake our ability to explore for oil and our reliance on foreign oil and our domestic economy, and we need to find ways to reconcile these tensions and achieve our economic goals while adequately protecting our environmental needs.

TAJ: Concerns about striking the right balance recently stopped natural gas exploration in Alaska’s Chukchi Sea, after a federal judge determined not enough was known about how the lease might harm wildlife there.

For Living on Earth, I’m Mitra Taj in Washington.


Click here for NOAA's 2007 biological opinion on oil and gas drilling in the Gulf of Mexico.

Read about the U.S. Fish and Wildlife Services' role in approving of MMS oil and gas leases.

Click here to learn about Gulf marine life affected since the spill.

Learn more about NOAA's response to the oil spill.