Drilling Down on Fracking 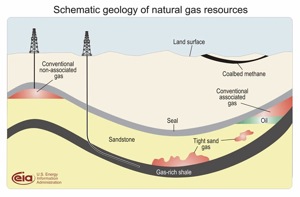 Hydraulic fracturing, or fracking, is a process used to extract natural gas from shale deposits deep within the earth. Natural gas could help the U.S. meet its CO2 emissions-reductions goals, but many environmental problems, including water pollution have been associated with extracting this resource. Host Jeff Young talks with Christopher Flavin from the WorldWatch Institute about how regulating the natural gas industry could make this process more environmentally friendly.

YOUNG: Natural gas is a hot topic. A spate of high profile reports and a series of public hearings this month explore the pros and cons of this booming energy source. The Environmental Protection Agency is getting public input as it considers regulation for what’s commonly called “fracking.”

Hydraulic fracturing releases natural gas from deep in the earth by injecting water and chemicals into layers of shale. As EPA is hearing, fracking is also creating problems. Colorado resident Tracy Dahl held a vial of murky water as he spoke at the hearing in Denver. He blames a gas fracking operation for damaging his drinking well.

DAHL: We are forced to travel 80 miles to obtain potable water. To have fought so long and hard to protect our water resources and in the end to have to see them impacted regardless, has been most frustrating experience of my life.

FENTON: I don’t have a problem with production of oil, or natural gas or any of our other natural resources, but it shouldn't come at the expense and the degradation of the things we truly can not live without: our air, our water, and our health. The monetary gains, the jobs are nice, but we have to look after health and basic human needs of everyone on this planet. [Applause].

YOUNG: Stories like that got an even broader audience with the surprise success of a documentary film called Gasland.

[GASLAND TRAILER “Sometimes it bubbles and hisses when it comes out.”]

YOUNG: In one scene, tap water from a well apparently tainted by drilling, catches fire.

MONIZ: Gas really is a bridge to a low carbon future.

YOUNG: So on the one hand, a cleaner, abundant fuel; on the other, a threat to clean water. WorldWatch Institute director Christopher Flavin’s analysis finds the supply of natural gas coming on line is a game changer for U.S. energy policy. Mr. Flavin says that allows us to think of gas as a long-term replacement for oil and coal.

FLAVIN: If you replace an existing coal fired power plant with a new natural gas plant, you get about a two-thirds reduction in the carbon dioxide emissions. And, since we get close to half of our total electricity from coal currently, you could envision shifting a large fraction of our electricity generating capacity and thereby getting a big reduction to emissions.

Natural gas also produces a lot less of the more conventional pollutants that cause various kinds of lung damage and other human health problems, so across the whole range of environmental indicators, gas is superior to coal on almost every score.

And, the exciting thing about natural gas is it would also facilitate the development of the renewable resources. Things like solar and wind power are intermittent by nature and you need to have a back-up capacity and ideally a low-carbon back up. Renewables and natural gas really fit together very well in that way. I would argue that the combination of gas and renewables could allow us to replace most, if not all, of our coal fired electricity over the next 20 years.

YOUNG: So you’re pointing to some really big potential benefits here. But, most of what we hear are environmental downsides. People are really upset about fracking. Is there a bit of a split here within environmentalism?

FLAVIN: Well there’s been this tremendous boom in shale gas development. And that rapid development of the industry has meant many areas where there is not a solid regulatory structure in place, and I think also cases where the industry itself, many of the companies, have not developed solid environmental practices.

This sort of “gold rush” type of boom mentality has meant that there are practices being employed that are in fact leading to various kinds of environmental problems including the contamination of water supplies, unexpected blowouts of wells, air pollution, and just disruption from turning what had been relatively pristine rural areas into semi-industrial zones.

One of the things the industry has been fighting for that I think really is not justified is that they have fought any requirement that they disclose the chemicals that are put into the water. And it simply is something that needs to be done. And certainly any chemicals that are found to be toxic or potential carcinogens should simply not be allowed to include in those hydro-fracturing fluids.

YOUNG: There’s a lot at stake here for the vested interests in the electric utility area. What’s the response from the coal lobby to this potential for serious, large-scale switching over to another fuel?

FLAVIN: Well, behind the scenes the coal industry has been working very hard to really stop the development of natural gas generation in its tracks. Arguing that the supplies are really not as large as what other analysts say, arguing that this is just really not a secure way to provide electricity.

And really this sort of effort by the coal industry is doing enormous environmental damage because coal is not only responsible for a very large fraction of our greenhouse gas emissions, it’s really replacing that coal is one of the simplest, cheapest things we could do in terms of reducing the impact on the climate.

But coal is also responsible for a whole range of ecological and health problems. So I think those environmentalists that are quick to condemn natural gas should really think very closely about the alternatives and perhaps think about joining a coalition of both environmental and clean energy groups that are working to ensure that gas is developed in the most responsible way, that it can actually play a productive role in a clean energy future.


Click here to read the MIT report, “The Future of Natural Gas”

Click here to read the WorldWatch Institute report, “The Role of Natural Gas in a Low-Carbon Energy Economy”