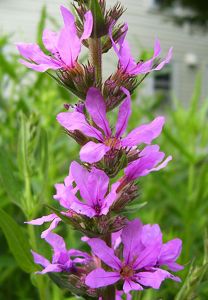 Purple loosestrife is a beautiful but invasive wetland plant that spreads quickly and pushes out native species. A tiny beetle has been found to attack purple loosestrife. Emma Jacobs reports that volunteers are more than willing to help propagate the predator. 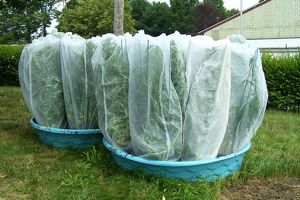 These Beetle nurseries are part of the purple loosestrife biocontrol project. Beetles breed on the covered Loosestrife plants and are later released into the wild. (Photo: NepRWA)

JACOBS: Purple loosestrife has beautiful purple flowers, but in most places in the US, it’s not a welcome sight. Once loosestrife gets into a wetland, it takes over, edging out native plants like cattails.

ROCKLEN: We’re walking through a meadow. ...

JACOBS: On a warm afternoon, Carly Rocklen heads down a slope of thick grass to a low-lying depression filled with plants. In waist-high fishing boots, she wades through water about a food and a half deep towards the center of the wet meadow.

ROCKLEN: When we first started, this was basically all pink with flowers. So look all the way back, and you can see the purple loosestrife extends towards the treeline.

JACOBS: Rocklen is a conservationist with the Naponset River Watershed Association South of Boston. Massachusetts is one of 49 states whose wetlands have been consumed by loosestrife. The plant invades some 300,000 acres in the U.S. each year. That’s just under the size of greater Los Angeles. Scientists have been hard at work developing tools to combat the fast-spreading invasive. 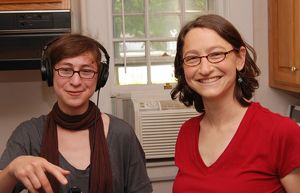 ROCKLEN It’s far easier to see a variety of plants now than it was several years ago when most of what we were seeing was purple loosestrife.

ROCKLEN: Ok, so this is interesting.

JACOBS: Rocklen waves me over to a thick, knee high stalk to see evidence of the secret weapon in her fight to bring the loosestrife down. 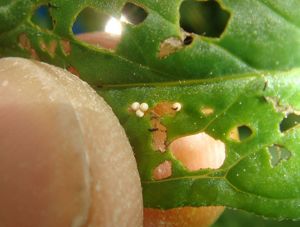 JACOBS: Galarucella beetles come from Europe where the plant also came from in the 1800s. Scientists discovered that galerucella beetles eat only loosestrife and they were approved as a control organism in the U.S. in the early 1990’s. Beetles have since been released in about 35 states. Georgeanne Keer is a project manger for the Massachusetts State Division of Ecological Restoration. She says the introduction was necessary because, in the U.S., purple loosestrife has no natural predators.

KEER: It’s here and there is nothing in our environment that’s controlling it. And so we needed to find something that would actually keep it in check so that the other species can regain the competitive edge.

JACOBS: Keer oversees the release of Galerucella beetles in Massachusetts. The insects have been sought after by conservation groups around the country since their introduction.

KEER: There’s a high competition for beetles so again, the need to identify another source and so ranching or rearing, albeit a quirky term, became an option or another resource or tool.

Poking air holes so the beetles can breathe.
(NepRWA)

JACOBS: In a small office kitchen, a group of women meet to divide up Carly Rocklen’s small purchased supply of beetles, which arrived overnight FedEx from New Jersey. These volunteer ranchers will raise thousands of beetles to release in Boston-area treatment sites over the season. One of the volunteers taps a pitcher to knock beetles into plastic cups.

JACOBS: The beetles are about 3 MM long and translucent. The insects have been refrigerated, which slows them down, but as they warm up, they start to take off.

ANDERSON: Wait! Put him in here. Oh! Too late, he flew away.

ANDERSON: I remember walking around as a girl with my mother in wetlands and seeing marsh marigolds and cardinal flower and things you just don’t ever see now. It was enormously frustrating that there was nothing we could do about it. And when we heard about this project it was just a no brainer to get involved.

JACOBS: A few weeks later I drove to Anderson’s home, where she and her daughter, Elizabeth, tend their beetles. The two show me a blue plastic pool of plants at the end of the driveway.

E. ANDERSON: This was actually my brother’s wading pool. It’s filled with a half dozen potted purple loosestrife stalks wrapped in mosquito nets.

J. ANDERSON Inside the netting are 12 to 15 beetles that we released in each plant. And the idea is to have the beetles mate and lay eggs and reproduce so that we have thousands by the end of the summer.

JACOBS: We walk to a marsh beside their home. They say there’s less loosestrife here. It could be because of beetles released last year.

ANDERSON: This right here is a clump of blue flag, which is a wild iris. If you look at these little brown tips these were all flowers a week or two ago. In the past the loosestrife shaded it so much that it was not able to bloom. So it’s nice to see that the native plants are already doing better.

JACOBS: Janet and Elizabeth Anderson and the other Boston-area ranchers, will soon release their beetles. The bugs will overwinter and be joined by additional beetles released next summer.

[SFX: Outdoor noise fade out underneath:]