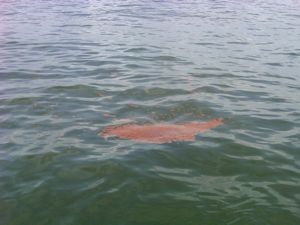 A blob of oil floats on the surface of the water in the Gulf of Mexico. (Photo: Jeff Young)

Conservationists and Gulf Coast officials say the effects of the BP oil disaster will be widespread and long lasting, and itÂ’s time to start thinking about a large-scale, long-term response. They say the best way to help the fragile marshes recover from the oil is an ambitious plan to restore the disappearing wetlands of the Mississippi Delta. LOEÂ’s Jeff Young reports from the Louisiana coast.

CURWOOD: More than 100 days into BPÂ’s oil disaster, officials are close to injecting mud to kill the runaway well. But those dealing with the blow-out and its effects say this is only the end of the beginning. Millions of gallons of oil still pollute the Gulf of Mexico and the long job of restoration lies ahead. From Louisiana, Living on EarthÂ’s Jeff Young reports.

YOUNG: We were about ten miles from the mouth of the Mississippi when Doug Inkley spotted it.

INKLEY: Look right here, see the sheen? Also all the little droplets of oil all over the surface.

[Boat sloshing about in water]

YOUNG: Inkley’s Senior Scientist with the National Wildlife Federation, which organized this boat trip. Here, where the river’s brown water hits the Gulf’s blue, he finds a line of thick rusty brown blobs stretching on and on.

INKLEY: There’s no way you can get though this water without coming into the oil not only the sheen on top but little particles spread everywhere all over the surface and probably underwater as well. Just oil everywhere. 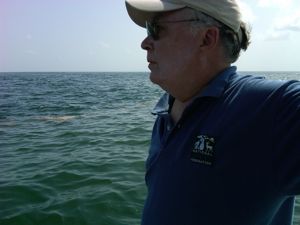 Doug Inkley of the National Wildlife Federation points to oil in the Gulf of Mexico (Photo: Jeff Young)

YOUNG: OK, but nasty as this is, it’s got to be better than it was?

INKLEY: Well certainly the situation I’m looking at on the surface appears to be better than it was from what I saw 2 months ago. It is more degraded. I’m not seeing as much of it. But I’m also not looking underwater. I’m very anxious to see the science and the reports that come back from NOAA and other agencies looking at this underwater. I wish you could come back to talk to me in 5 years and say, I was wrong. I hope I’m wrong about the impacts. But I don’t think I am.

YOUNG: Inkley thinks the impact will be big and broad. And he says it’s time to start thinking the same way about recovery: large-scale and long-term.

INKLEY: The ultimate solution to this BP oil spill is to do long-term restoration. You really can’t clean the oil up, as we’ve seen, because it’s floating in the gulf. You really can’t clean up once it’s spilled. If you go into the wetlands you do more harm than good tromping around in there or using other means to try to get it out of there. Recognizing we can’t go in and clean the oil out of the wetlands, let’s put in place a large program to begin to restore some of these wetland areas.

YOUNG: Inkley says more resilient marshes will have a better chance of bouncing back from the oil. But making them stronger means tackling some tough issues. The Mississippi’s long levees keep the river from spilling over to rebuild wetlands with sediment. It’s estimated Louisiana loses a football field of land every 40 minutes. In his June speech from the Oval Office, President Obama indicated coastal restoration would be part of his Gulf restoration plan. 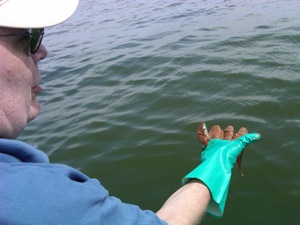 OBAMA: We need a long-term plan to restore the unique beauty and bounty of this region. The oil spill represents just the latest blow to a place that’s already suffered multiple economic disasters and decades of environmental degradation that has led to disappearing wetlands and habitats.

YOUNG: The president assigned Navy Secretary Ray Mabus, a former Mississippi governor, to lead Gulf restoration. That was a hopeful sign for King Milling. Milling is a courtly former bank president who chairs Louisiana’s advisory committee on coastal protection and restoration. In his office in the Whitney National bank in New Orleans, Milling pulled out a map.

MILLING: The map we are looking at reflects what happens if we do nothing.

YOUNG: The map shows a slender strip of land along the river sticking out into the Gulf. But the rest of southeastern Louisiana’s wetlands are gone. It is a radically different coastline that could be reality by the end of the century.

MILLING: Absolutely the Gulf of Mexico has inundated far beyond New Orleans north on both sides of the river. If this occurs we will probably have to move 1.5 to 2 million people. What you’re looking at in terms of that map could make Katrina look like a blip on the water. So there are choices that have to be made.

YOUNG: Louisiana’s official plan to fight back calls for large diversions of the Mississippi to carry fresh water and sediment to replenish marshes. Coastal scientists endorse the plan, but the state can’t carry it out alone. Milling says it’s a massive civil engineering project that could cost from 50 to as much as 100 billion dollars – and would require strong federal leadership.

MILLING: Now, is Washington prepared to take this on and understand it or are they going to continue as they have at some points in the past, of kind of pushing it aside in hopes that it will go away. This is not going away.

A blob of oil floats on the surface of the water in the Gulf of Mexico. (Photo: Jeff Young)

YOUNG: What’s your sense from what you’ve heard from Secretary Mabus - are they serious this time around?

MILLING: I think they’re serious. I think they’re very serious. I think the president and his staff are concerned about this issue. It’s the magnitude of it I think that is difficult for people to get their minds around it. I don’t want to be cynical but fact of the matter is if this much land had been lost in New England or on the northeast coast I suspect we’d have figured out a way to address it. We deliver the fish and we deliver the oil and gas and that’s our function and if that don’t happen then hell with it. And this country’s just got to decide what it can and can’t do. And if it decides it can’t do it then tell us to get the hell out of here.

YOUNG: It’s startling to hear these words from this genteel member of the establishment. But people on the Gulf Coast have heard so many promises and seen so much loss, they can’t hide the frustration and anger. Secretary Mabus will be back on the Gulf Coast the first week of August for more talks about Gulf restoration. He’ll likely hear a call for less talk – and more action. For Living on Earth I’m Jeff Young in New Orleans.

CURWOOD: Just ahead - Keep listening as we celebrate one thousand broadcasts of Living on Earth!

Click here to see a satellite image of Louisiana