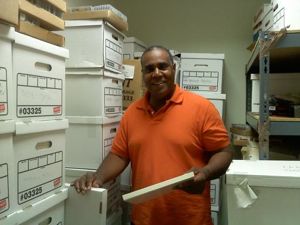 Living on Earth marks a milestone: 1000 shows and counting. Host Steve Curwood rewinds LOEÂ’s first broadcast and finds the issues today are eerily similar to those we reported on when the show debuted 20 years ago.

CURWOOD: It’s Living on Earth show number 1000, I’m Steve Curwood. We’ve kept master copies of all our shows. They’re in boxes piled floor to ceiling in a storage room. In the early days we recorded onto ten-inch reels of magnetic tape.

CURWOOD: So when we realized this milestone was getting close – producer Helen Palmer and I set off on a quest to find the very first show.

CURWOOD: Alright down it comes.

PALMER: Oh, I can’t lift this.

CURWOOD: So let’s see...the politics of global warming…oh this was one of the pilots done in 1990.

CURWOOD: Yes, look at this

PALMER: Let me have a look at this one. 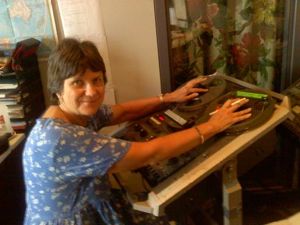 CURWOOD: Well where else would it be? Yeah, now I’m going to move these one at a time and put them over here.

PALMER: Wow, here it is 7 and a half inches per second reel to reel tape, when did you last see that?

CURWOOD: All right, let’s go into the studio and see if we can find a machine that will play this thing.

PALMER: Ok, here’s the thing. Let me plug it in. Look it turns on! How absolutely amazing!

[Sound of machine turning on]

CURWOOD: Now it seems to be working properly. Ok, let’s play itand see if it kicks anything.

CURWOOD: From National Public Radio, this is Living on Earth.

CURWOOD: I’m Steve Curwood. Damage to the earth, to the land, the air, and the water. The environmental cost of the Persian Gulf War.

CURWOOD: Our first show focused on the environmental consequences of the Persian Gulf War - and today, a thousand shows later - it’s de ja  vu all over again, as Yogi Berra would say. Back then, Susan Murray of the CBC reported on what is still the biggest oil disaster in history - in Kuwait and off the Saudi coast.

MURRAY: Vacuum pumps work furiously to suck in some of the thick black mats staining the beaches of Saudi Arabia. Jim O’Brien, of the Louisiana clean up firm, OOPS.

O’BRIEN: What I’d say is, it’s a very massive spill that’s coated every beach, every bay, every back bay, every lagoon, every shoreline.

CURWOOD: Many of those first stories were doom and gloom - but we saw a bright, green future too - just over the horizon:

FEMALE ANNOUNCER: The Australian group predicts that within a decade their cells will produce electricity at half the cost of coal.

CURWOOD: Well, rather too optimistic, and we’ve made our share of mistakes since we started Living on Earth, 1000 shows ago. But creating a radio show wasn’t my first idea - I wanted to write a book about global warming. I thought it was the hottest journalistic topic out there - war Â– peace - the economy and more are wrapped up in the question of global warming. So for advice, I went to Cape Cod and met with George Woodwell. He’s a leading scientist who had counseled President Jimmy Carter and testified before Congress about climate change. Dr Woodwell wasn’t exactly encouraging.

WOODWELL: Well I remember that you came with the idea that you would write a book and I wonder if I should have been as discouraging as I apparently was. The fact is that I have written a lot about the climatic issue, a lot that had been ignored, and others were writing about it, and we seem to be getting nowhere. And at that time I thought another book would probably have the same fate. So I guess I was discouraging in that context.

CURWOOD: Hearing you say well, who’s going to read another book, certainly one by Steve Curwood, I said well doggone it nobody is doing radio on this subject. So I left your place mad, and taking action. I was going to do a radio show.

WOODWELL: Well, I’m not too happy that I made you mad, but it’s worked! And that’s even more important now than it’s been previously.