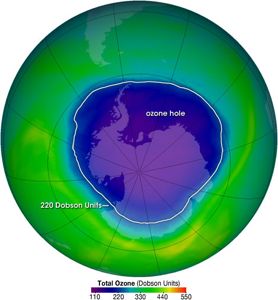 Environmental conditions above Antarctica make it the worst location on earth for rapid ozone depletion. (NASA)

As Living on Earth airs its 1,000th program this week we take a look back at the very first news segment on ozone depletion from 1991. Host Steve Curwood talks with environmental journalist Dianne Dumanoski about the near miss of an ozone catastrophe and how to apply lessons learned then to today's struggle to deal with climate change.

CURWOOD: It’s Living on Earth, I’m Steve Curwood. The very first story we did back in 1991 was a brief item about the hole in the ozone layer. Back then we had an environmental newscast at the top of the show. Jan Nunley was our newscaster.

NUNLEY: The Bush administration is reviewing new research data that show the ozone layer over the United States is disappearing at twice the rate previously estimated. The Environmental Protection Agency is now predicting that 12 million Americans will develop skin cancer in the next 50 years as a result of increased exposure to ultraviolet light. Agency administrator William Reilly says the US should reappraise its policy on control of ozone-destroying chemicals. 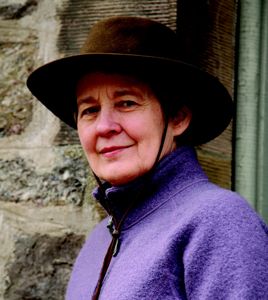 CURWOOD: At ground level, ozone, a hyperactive form of oxygen, is a pollutant. But high in the stratosphere a thin layer of ozone screens out a lot of ultraviolet radiation from the sun, making life possible on land. Back in the 1980Â’s a large hole in the ozone layer suddenly appeared over Antarctica and surprised scientists. The hole in the sky spawned the 1987 Montreal Protocol, an international treaty to phase out Freon and other chemicals that destroy the ozone layer. Still, the damage was done and skin cancer rates in the US have turned out to be much higher than earlier predicted. Ozone loss appears to have peaked in 2006. But it will be another 60 or so years or so before the protective layer is forecast to get back to normal. Author and journalist Dianne Dumanoski covered the Montreal Protocol for the Boston Globe in 1987 and says the ozone story has much to teach us today.

DUMANOSKI: One of the things that was really ironic about this was that shortly before the hole in the ozone layer appeared, the National Academy of Sciences research council had done the final of its four assessments on ozone depletion and had concluded that the problem was not as severe as we thought. And then - bam - we have this report out of left field about this dramatic loss of ozone. And you had the scientific community debating about whether this was man-made, or a natural event. And a whole lot of people found the idea that man-made chemicals could cause this bizarre disappearance of ozone to be inconceivable, basically. They thought the planet was robust and how could humans do enough, even with the modern scale, the modern industrial enterprise, to perturb it?

CURWOOD: The ozone problem, you write in your book, actually could have been much worse if the engineers involved, the chemical engineers, had used a slightly different refrigerant, cause this was first - these chemicals were first widely used in refrigerators. Can you tell me that story?

DUMANOSKI: Yes. Had Thomas Midgely, the inventor of CFCs, made his refrigerants with bromine rather than chlorine, we could have had catastrophic ozone loss by the early 1970s in all seasons, in all parts of the earth.

DUMANOSKI: Because atom for atom, bromine is a hundred times more destructive and it doesn’t require special conditions. In Antarctica you only have ozone depletion in the springtime when the sun is rising, and you need these special super cold clouds, polar stratospheric clouds that only occur over Antarctica. Had we had bromine in these refrigerants, these refrigerants could have destroyed the ozone layer anywhere and at all times.

CURWOOD: So what did the world do at the time to avoid truly catastrophic ozone depletion? We’ve got plenty of problems from it, but it didn’t push us over the edge really.

DUMANOSKI: Basically, when ozone depletion showed up, it showed up in a place never forecast, in a much more dramatic way, and via a chemistry that hadn’t even been thought of. So it was a complete surprise that blindsided scientists. Where you had basically 50% of the ozone layer over the South Pole disappearing in a matter of weeks. I mean it was just this science fiction event that was so bizarre and so beyond what was thought possible that the NASA computer kept consigning the data that the satellite was seeing to the junk file for further analysis later. If you had suggested, before this was actually documented, that this was possible, one leading scientist, Susan Solomon, said, “it would’ve been considered preposterous and alarmist.” The fact that it didn’t turn into worldwide catastrophe was perhaps in part because we got together and did a treaty called the Montreal protocol to start eliminating these chemicals.

CURWOOD: So the ozone story can be seen, actually, as a fairly good story. It’s still a problem but itÂ’s not a catastrophe. A treaty was put together. Caps were put on this. We took these chemicals as much as possible out of industrial circulation.

DUMANOSKI: That was a positive development for sure, and at the time there was huge optimism that this would be a model that we could follow and move on quite swiftly to climate change. I can, in fact, remember the day I was in a room in Montreal, when the treaty events were concluding, and I remember speaking with a Norwegian diplomat who was saying to me “well onto climate change.” And there was a feeling that we were going to roll forward to the Earth Summit in Rio in 1992 and really get moving and deal with these problems of global change. We went to Rio, but we seemed to go home and take off on another track.

Environmental conditions above Antarctica make it the worse location on earth for rapid ozone depletion. (NASA)

CURWOOD: Around climate, there’s much controversy in the political realm about the science. How does that compare to what happened over the ozone layer? What lessons could we take from our experience with ozone and the scientific debate there and bring into the present?

DUMANOSKI: Well I think one of the important lessons is that uncertainty cuts both ways. That our ignorance is often far greater than our knowledge. And that we’re playing a game where nature holds a lot of wild cards. And that we’re likely to go through the century knocked off our feet by surprises. So I think uncertainty is no reason to continue playing this Russian roulette with the planetary system. Uncertainty could mean that we do not emerge at the end of the century with organized human life.

CURWOOD: Dianne Dumanoski’s latest book is “The End of the Long Summer,” thank you so much Dianne.