President Obama speaking about clean up efforts on the Gulf Coast with Ray Mabus, Secretary of the Navy and Obama’s choice to head up Gulf restoration efforts. (U.S. Navy)

The Gulf region faces a laundry list of environmental problems, from coastal erosion to oil cleanup. President Obama recently selected the Secretary of the Navy, Ray Mabus, to come up with a long-term Gulf restoration plan. Host Jeff Young sat down with Secretary Mabus who says this administration's commitment to the Gulf will be judged by results.

YOUNG: The man in charge of the federal government’s plan for restoring the Gulf brings a varied resume to the job. Ray Mabus is the 75th Secretary of the Navy. He was governor of Mississippi in the late 80s, and was President Clinton’s ambassador to Saudi Arabia. I spoke with Secretary Mabus in his Pentagon office. He told me what he’s been hearing in his town hall meetings on Gulf restoration.

MABUS: When the cameras go off, once the well was capped, not to forget the Gulf. Second, that whatever plans come forward, ought to come from the Gulf, up. People of the Gulf, the people who live there, raise their families there, ought to be the ones that are the primary drivers. Third, a lot of work has already been done on how to restore the Gulf environmentally, for example. Not to try to re-invent the wheel but simply use these sorts of things going forward. Finally, that the Gulf is so important to the rest of the country that while this was a Gulf crisis; it’s a national issue. This is America’s Gulf and this should be a national response to this.

YOUNG: And how big a piece of the puzzle is the restoration of the land itself- saving the wetlands?

MABUS: Ecosystem restoration has got to be our top priority. Louisiana loses a football field of land every 38 minutes. Some of the issues in the Gulf, environmentally, have been well known for a long time now- the erosion of wetland, the erosion of barrier islands. And, the fact that, as wetlands erode, as barrier islands erode, you make hurricane protection less viable. Those things have been there before - the oil spill made them worse…clearly made them worse. So I think that while you are restoring the damage that the oil spill has done, it may give you an opportunity to work on some of these longer-term things, because you’re going to be there anyway.

YOUNG: Do you see BP paying for this? 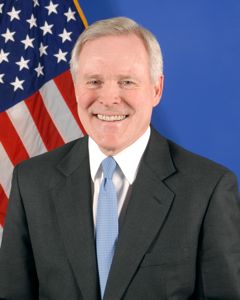 MABUS: Well I think BP is clearly the responsible party for the oil spill. For things that have been there for a long time you may look to different sources.

YOUNG: You know, when I have been to the Gulf recently, I hear great deal of frustration and some skepticism from people about claims that help is on the way. Did you pick up on that at all? And, if so, what do you…how do you overcome that?

MABUS: The main assurance I have is that the President of the United States from the Oval office promised the people of the Gulf and the people of America, and I think that that is the ultimate guarantor.

YOUNG: Of course, it’s not the first time a president has pledged to help the gulf coast:

BUSH: We will do what it takes. We will stay as long as it takes to help citizens rebuild their communities and their lives.

YOUNG: That was president George W. Bush in the wake of Hurricane Katrina. Forty years earlier, President Lyndon Johnson made this pledge after Hurricane Betsy. 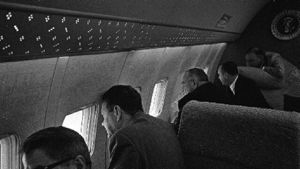 President Lyndon B. Johnson looks at the aftermath of Hurricane Betsy in New Orleans, 1965. (oldneworleans.com)

JOHNSON: The national government will be at Louisiana's side to help it every step of the way in every way that we can.

YOUNG: Why should Gulf residents think this time is going to be different?

MABUS: Well, for one thing, the response has been… it’s been a huge federal response to the spill itself. Look at what’s been done already. But, second is…judge by results. If you want to build trust be trustworthy. I hope that the report I give to the president and the actions that are taken in the wake of that will help build that trust and particularly the actions day in day out month in month year in year out will continue to build that trust over time.

YOUNG: So, if you expect people in the Gulf to judge you by results, what should they be looking for…what would that first result look like?

YOUNG: Secretary Ray Mabus thank you for your time.

Click here to hear an extended interview with Secretary Mabus