Where Are They Now: Bob Rue 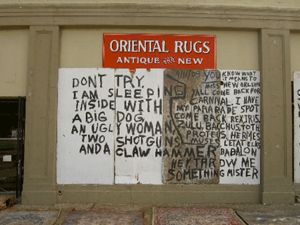 Bob Rue scrawled these messages on the front of his Oriental Rug shop on St Charles Ave. Rue never left New Orleans during the storm but fears many of his fellow citizens will never return. (Photo: Jeff Young)

Bob Rue put up hilarious signs to ward off robbers and guard his store against looting after Hurricane Katrina. Host Jeff Young meets up with Rue to hear how his business is faring now and what’s changed for him since 2005.

YOUNG: Well, time now to catch up with someone we interviewed in the wake of Hurricane Katrina. 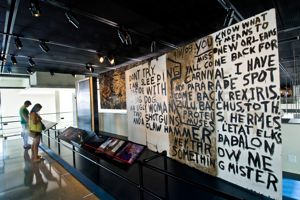 YOUNG: Bob Rue never left New Orleans, not even when the storm hit. He stayed to guard his business, Sarouk Shop, Oriental Rugs on St Charles Avenue. When I first spoke with him in 2005, he was enjoying a brief moment of fame. Newspapers carried pictures of a sign Rue had scrawled on his boarded-up windows: a warning to would be looters.

RUE: It said 'Don't even try, I'm sleepin' inside with a big dog, an ugly woman, two shotguns, and a claw hammer.'

YOUNG: I won't ask who the ugly woman is.

RUE: Well, we have some discretion here.

YOUNG: Well, today the streetcars and tourists are back on St Charles Avenue. And Rue tells me his famous plywood sign has found a new home.

RUE: Well, now it belongs to the state of Louisiana. They’re gonna have the fifth anniversary at the Presbytere. And my sign is going to be in the entry.

RUE: Yeah. You know I went down there, and I had all five pieces of plywood I found in the street and painted up as the signs on plywood in the bottom of my truck I was just kind of throwing them on the ground and these museum people were out there with little white gloves picking them up and fondling them, you know. Right now one of ‘em’s on display in Washington DC at something called the ‘News Museum’.

RUE: The Newseum, yeah. And the girl called me for weeks trying to get my picture of me with Tim Russert standing out front. But, I can’t find it, it’s lost in the ménage. I got married since then and moved everything I don’t know where all my pictures are from the storm.

RUE: Yeah. There’s still women in New Orleans with no taste. She’s wonderful - she’s half French, half Sicilian. Her family grew up here in New Orleans, and she’s an incredible cook, pretty damn funny, and overlooks a lot of flaws.

YOUNG: Well you seem to be doing well.

RUE: Uh…there’s no business. The banks aren’t loaning any money for mortgages so nobody’s buying houses so they’re not decorating so they’re not buying rugs. I’m having to depend on rug cleaning and repair, which is...thank god for dogs, because they pee everywhere. We got these little black voodoo candles in the shape of a dog. When things are slow, we light ‘em up and all over town dogs go crazy start biting rugs pissing everywhere – basically we’re making it on rug cleaning.

Bob Rue scrawled these messages on the front of his Oriental Rug shop on St Charles Ave. Rue never left New Orleans during the storm but fears many of his fellow citizens will never return. (Photo: Jeff Young)

YOUNG: And sure enough, in walked a customer with a pet-stained rug. See pictures of Bob Rue’s famous signs at our website LOE dot ORG.

CURWOOD: In just a minute – the Gospel jazz trumpeter who says Hurricane Katrina baptized the city of New Orleans- stay with us at Living on Earth.


The museum exhibit at the Louisiana State Museum, in the Presbytere