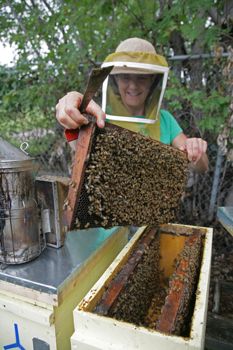 What do a jazz pianist, a linguist, a stone carver, and an entomologist have in common? They’re among the winners of this year’s MacArthur genius grants. Host Bruce Gellerman gets the buzz from award winner Marla Spivak, a honeybee expert from the University of Minnesota.

GELELRMAN: Genius comes in many forms and every year the MacArthur Foundation rewards genius in many fields, and sometimes, many fingertips.

GELLERMAN: A jazz pianist and composer is among the 23 winners of the MacArthur Award – the so-called genius grant this year. So is a stone carver, a linguist working to preserve the Algonquin language, a TV writer, and John Dabiri, a Cal Tech biophysicist who studies jellyfish.

DABIRI: In my work we study both the successes and the failures of biological systems. And then we try to take that knowledge and use it to improve engineering systems like underwater vehicles, cardiac diagnosis of heart failure and more recently wind energy.

GELLERMAN: In recognition for their creative contributions in their fields, MacArthur Fellows each receive half a million dollars, no strings attached.

One winner who created plenty of buzz this year is Marla Spivak, a professor of Entomology. She studies honeybees at the University of Minnesota. Congratulations Professor!

SPIVAK: Thank you very much!

GELLERMAN: So, how did you find out that you were a MacArthur Fellow?

SPIVAK: They set me up. They told me a woman named Liz Brooks was coming to talk to me about a freelance story she was writing and she didn’t’ show up.

SPIVAK: I didn’t even know her. But, it took me awhile to figure out what the whole conversation was about (laughs.) But then they let me know that I had received this fellowship.

GELLERMAN: And, what did you think?

SPIVAK: Well I was floored. Actually, I didn’t really believe they had the right person. And I was having a lot of trouble getting my mind around what they were trying to tell me, so I had to take some notes (laughs) as they were speaking, to help it sink in.

GELLERMAN: Your work with bees sounds fun. Where’d you get the passion for bees?

SPIVAK: Well, I’ve been interested in bees since I was 18 years old. And, I worked for different bee keepers, and done research in different areas, and I just have loved bees ever since I read about them and started working with them.

GELLERMAN: Well when I was reading about you and your work with bees- it’s easy to think that working with bees is kind of quirky, but, they’re really important- they pollinate, what, a third of the United States’ food supply?

SPIVAK: That’s mostly our fruits and vegetables. And if you include alfalfa hay, and you know we need seed, we need alfalfa seed to plant the hay and considering where the hay goes- you know, to our dairy industry and to our meat industry- then you can see that the benefits of pollination extend way beyond just some fruits and vegetables.

GELLERMAN: So, lets talk about your work. What you’ve been focusing on is ways to keep bees healthy.

SPIVAK: Yes, that’s what we do. And that includes things like breeding bees for their own defenses against diseases and parasites. And, currently we’re looking at resins that bees collect called propolis from certain trees.

So, up in this area it would be poplar trees, birch trees, alder. And, they use the resin inside the nest to seal up cracks and to line in the nest cavity.

And, for humans we’ve known that propolis has a lot of antimicrobial properties. So, for example, it even has activity against the HIV virus, and many other bacteria and fungi and viruses, but no one has ever thought to ask what the resins do for the bees themselves.

And we know now, from a student’s PhD research that it really benefits their immune systems. They use it like a varnish, or a cement, inside the nest. An analogy might be if you are living in a house with dust mites or mold, if you would paint your house inside with these resins, propolis, they would kill of the molds and the dust mites, and so your immune system wouldn’t be constantly fighting that battle.

GELLERMAN: I was reading that you also focus on how genetically influenced behaviors confer disease resistance to the entire colonies.

SPIVAK: Yes, we’ve been breeding bees for hygienic behavior, which is a particular behavior of the bees, and that, at a colony level, gives them resistance to disease and mite parasites. And so, in this behavior the bees sniff out diseased larvae.

And they sniff this out with their antennae, their antennae is their nose, if you will, and they’re able to detect these diseased larvae and then they throw them out of the nest.

GELLERMAN: Bees have been really taken it on the chin, lately. I know about the varro mite, I did a story on that 10 years ago. But now they’ve got this colony wasting disease. Do you think your research is going to help bees be sustainable?

So, I think, together we’ll come up with, we’ll try to figure out together what is causing colony collapse disorder and what’s compromising bee health in general. And, I think we can make some changes, some cultural changes, maybe some genetic changes in the bees- the cultural practices in the beekeepers- to help keep bees alive.

GELLERMAN: Professor, I’ve got to ask you. Do you like honey?

GELERMAN: Well, Professor Spivak, I want to thank you very much, and congratulations!

SPIVAK: Thank you so much.

GELLERMAN: Well, by the way, do you know Jason Moran? Did you ever hear of his music?

SPIVAK: I have to admit that I’ve only heard his music in the last day. And, I hope that if he hears that…he’s not offended.

GELLERMAN: Well he probably just heard about you, Professor, too.

GELLERMAN: The music of fellow MacArthur fellow - Jason Moran. And here’s some sweet news that’ll prick up the antennae of Marla Spivak and fellow honey lovers. Scientists believe they may have discovered the cause of the mysterious colony collapse disorder, which has killed up to 40 percent of the nation’s honey bees. Make that causes-- researchers have found a fungus and a virus, working together, may be the culprits.

Scientists at the Army’s Edgewood Biological Center and the Bee Alert Team at the University of Montana report finding the fungus-virus combination in every killed colony, though neither appears able to destroy the bees alone. Other suspected causes of the bizarre disorder have been floated. They include genetically modified crops, pesticides, and radiation from cell phone towers.