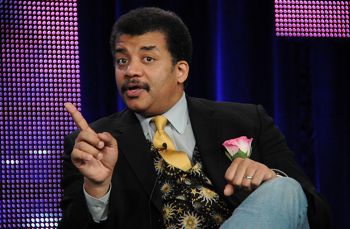 Neil deGrasse Tyson brings the wonder of the cosmos to everyone. His program NOVA Now resumes on PBS this winter.

For as long as we've gazed at the heavens, we've never seen a planet that looks quite like us. Some planets were too close to their sun, and some were too far away. Now host Bruce Gellerman asks astrophysicist Neil deGrasse Tyson about the "Goldilocks” planet that is potentially just right for life.

GELLERMAN: Who hasn’t stared into the starry night and felt, you know, alone?

Well, seems there are a lot of neighborhoods in our universe and over the past 20 years astronomers have discovered hundreds of planets. However, they’ve been either too big, too small, too hot or too cold to sustain life.

But astrophysicist Neil de GrasseTyson, the director of the Hayden Planetarium, says a newly discovered planet holds out the tantalizing prospect of being “ just right.”

DE GRASSE TYSON: Yeah, yeah, it’s a jackpot actually. What we’ve always been curious about was whether any of them orbited their host star at the right distance where you could sustain liquid water- if the planet had an atmosphere. And most of the planets, nearly all of those planets were not in this ‘Goldilocks Zone.’

The one or few that were are huge Jupiter-sized planets that no one imagined that you’d have life on Jupiter. So, the holy grail in this exercise, was trying to find an Earth-sized planet in the Goldilocks zone around one of these stars, and that’s what was just announced.

GELLERMAN: This Goldilocks planet- the one that’s outside of our solar system, does it have a name?

GELLERMAN: It kind of rolls of the tongue.

DE GRASSE TYSON: I know, and Gliese is the name of the catalog. 581, that’d be the number in the catalog. G is the Gth object found the system- so it’s not a lone planet in orbit around the single star, there’s other stuff there.

And, so that’s part of what’s exciting about it is that it’s a star system that it’s a part of. It’s where many of the exo-planets have been found.

GELLERMAN: So, what exactly is an exoplanet?

DE GRASSE TYSON: That’s just a word that we give to planets outside of our own solar system. So, we’ve got our 8… get over it. (Laughs).

DE GRASSE TYSON: And then we go to other stars and they’ve got planets of their own. And, they used to be called extra-solar-planets, but that’s too many syllables and unnecessary, so, they’re exoplanents. And then there’s the field of study that is in search of life and it’s exobiology. The exo is what gets you out of our own solar system.

GELLERMAN: In exobiology the ex could also be for extreme biology.

DE GRASSE TYSON: Yes, in fact, excellent perceptive point. There’s biology on earth thriving in extreme conditions that would kill us post-haste. And, we call those extremophiles, actually, lovers of extreme environments.

That has allowed people who look for life elsewhere in the universe to cast a much wider net of the conditions under which they think life might thrive. Simply because of the broad conditions that we find life thriving here on earth- high temperature, low temperature, high pressure, high radiation- and you say ‘hey, wait a minute! It doesn’t just need a room temperature warm pond.’ If it can thrive in all these conditions- bacteria life that is- then why can’t we look in many more places than we have before?

GELLERMAN: Yeah, it turns out that life is so tenacious, it really can exist in very extreme conditions.

DE GRASSE TYSON: Right. Not all life. There’s some life that can, and does and thrives. And so, what it means is, if you need intelligent life to have a warm pond- forget it (laughs). Figure out how to talk to bacteria and that might be all you’ll be finding. But, nonetheless, it would still be a remarkable discovery to find life of any variety out there, even if it’s just single-celled life.

GELLERMAN: But if we went to an exo-planet, we could literally trip over something and we might not know it’s life.

DE GRASSE TYSON: Yeah, that’s an interesting philosophical point. Whether there could be forms of life that are beyond our awareness, or our capacity to even register as life- and I once sat a little too long with a philosopher who towards the end said, “I wonder if rocks are alive.” I said, “Ok, I’m done with this conversation.”

DE GRASSE TYSON: (Laughs). “I’m sorry, I’m not going with you there on that one, alright? Take that one back to the philosophy coffee lounge.” But, normally when we think of life we think of a metabolism, an ability to process energy, we think of its ability to make copies of itself. But now, by the way, biologists as much as they might celebrate the diversity of life on earth, at the end of the day they have to confess that they have only a sample of one.

Because all life on earth has common DNA. All life we’ve ever investigated- oak trees, lobsters, jellyfish, humans. And, as a result, we’re not really in a position to assert what the minimum criteria for life should be. And so, that’s an unfortunate situation and part of what feeds this eager search for life elsewhere in the universe and nearby stars.

Astrophysicist Neil deGrasse Tyson brings the wonder of the cosmos to everyone. His program NOVA Now resumes on PBS this winter.

GELLERMAN: In astronomy, nearby is a relative term.

DE GRASSE TYSON: (Laughs) I should have made that clear! You’re absolutely right. This one is about 20 light years away, which if you wanted to visit it on the very fastest spacecraft we have ever launched, it would take about 300,000 years. So you need really fertile people on board this spacecraft, or just be happy with the telescopes.

I’d rather just stay at home at Earth, on Earth, and use my telescope to check it out.

GELLERMAN: Well, the Russians say they are going to be launching a space hotel soon, within five years. Have you heard about that?

DE GRASSE TYSON: Yeah, well, you know everybody…here’s the problem: normally we are at the head of this innovation and entrepreneurship, and my big concern is, just as an American, that the rest of the world has discovered space. We know that. China has just sent a mission to the moon just a few days ago, and here we are trying to convince ourselves and Congress that it’s a cool thing to do.

And that there’s unlimited resources. And, people aren’t listening strongly in America as they are listening in other countries. So, sure, more power to them. Put up a hotel. And then that means they collect our rent, that’s just how that goes, you know.

GELLERMAN: Well, I’m just thinking about all the frequent-flier miles I could have by going to this Russian hotel actually.
DE GRASSE TYSON: (Laughs) I bet they’d have to recalculate what the unit of reward is.

DE GRASSE TYSON: Thanks for having me!

GELLERMAN: You can hear our program anytime on our website, or get a download for your MP3 player. The address is L-O-E dot org. That's L-O-E dot O-R-G. There you’ll also find pictures and more information about our stories. And check out our Facebook page, it’s PRI’s Living on Earth. And while you’re on line, visit My Planet Harmony dot com. Our sister program, Planet Harmony welcomes all and pays special attention to stories affecting communities of color. Log on and join the discussion at My Planet Harmony dot com.