Deep in the Gulf of Mexico, scientists have discovered an ecosystem in collapse. Two biologists from Temple University, Dr. Erik Cordes and graduate student Andrea Quattrini, tell Bruce Gellerman what they’ve seen and what it means for aquatic life in the Gulf.

GELLERMAN: Deep in the Gulf of Mexico, just seven miles from the site of the BP oilrig disaster, scientists have discovered an ecosystem in collapse. Pictures taken by a submersible robot, forty-six hundred feet down, show images of dead and dying corals on the muddy seafloor. Among those studying the images is Erik Cordes, a biologist from Temple University and his graduate student Andrea Quattrini, who was aboard the surface vessel when the photos were taken.

QUATTRINI: We hit the spot and all the coral colonies attached to this area- most of them were already recently dead or dying. Most of the colonies, about 50 percent of all of the colonies, you could see tissue sloughing off, and dead skeleton with no live tissue.

CORDES: I was really saddened by this news. We hadn’t seen anything that was visually compelling like this. I think we were all hoping that the deepwater corals had somehow dodged a bullet here. 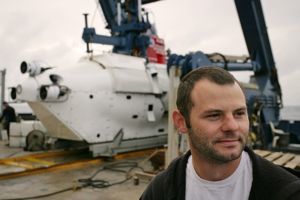 GELLERMAN: When you say corals sloughing off this tissue- I think most people think of coral as like a rock…

CORDES: A coral is a living animal. It has a calcium carbonate skeleton with a very thin layer of tissue covering the entire thing. And, in this case, you could see the skeleton, and the tissue actually falling off of the skeleton.

CORDES: It was a bit gruesome. It was a very sad sight. To see something like this was really clear evidence that there was a catastrophic event that caused this.

GELLERMAN: And you think its oil that killed them?

QUATTRINI: Well, we don’t really know quite yet what happened, but some of the evidence is pointing to the Horizon incident. 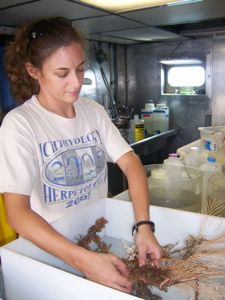 CORDES: In 15 years of studying deep-sea corals, and a lot of my time in the Gulf of Mexico, this does not look like it could have been caused by a natural occurrence.

GELLERMAN: Now, could it be from the dispersant and not from the oil?

CORDES: We actually don’t know exactly what caused it. It’s likely that there were some toxins present that caused this reaction by the corals, but was most likely the combination of the oil and the dispersant. 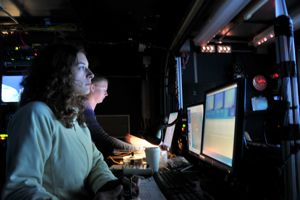 CORDES: So, we got to see this one site, there are a lot of other sites in the area that we know have the potential to have these coral communities on them. In fact, about 25 that some of our collaborators have picked out within a ten-mile radius of the Deepwater Horizon where we’re likely to find more corals. We will be going back in about three weeks and we’ll be visiting more of these sites and looking for more of this evidence.

GELLERMAN: So, Dr. Cordes, what are the long-term effects of this?

CORDES: Well, the recovery of these corals is gonna to take a really long time. They’re really slow growing. Everything in the deep sea tends to get slowed down, mostly because it’s so cold. Some of the coral’s related species to grow that large would take at least decades to even centuries.

GELLERMAN: My next question is an insensitive question: Why should I care?

CORDES: That’s a question I’ve been hearing a lot recently. Just like the shallow water coral reefs, the deep-water corals create a lot of habitat for other organisms. There’s a high diversity down there, there are a wide variety of species. There’s also a direct connection between the deep water corals and the shallow water ecosystem in the Gulf of Mexico- all of the corals are reliant on the productivity of the surface for all of their food- so there’s a direct tie there. 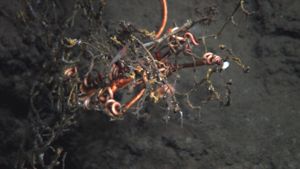 There are also a lot of species that live in shallow water that will actually migrate down to the depths during the day to try to hide in the dark and avoid predation. And they interact directly with these deep-water reefs and then return to the shallow water. Anything that happens in deep water is going to have repercussions in the shallow water and in the wider ecosystem of the Gulf.

GELELRMAN: Well, I want to thank you both very much. I really appreciate it.

CORDES: Sure, it was good talking to you.

QUATTRINI: Yeah, thanks a lot!

GELLERMAN: Just ahead, natural gas is booming – and a new, fossil fuel- friendly Congress is ready to open the tap. Keep listening to Living on Earth!