Gas Drillers are Pumped Up

Natural gas is emerging as a winner among energy sources in the recent election. From Congress to key gubernatorial races, the political landscape favors expanded use of natural gas. LOE’s Jeff Young tells us that poses challenges and opportunities for the environment. Gas is cleaner than coal or oil and emits far fewer greenhouse gases. But a drilling boom raises concerns about water quality.

GELELRMAN: It’s Living on Earth, I’m Bruce Gellerman. Big news, now, about natural gas: These days it’s almost as cheap as coal, due in part to a new method of drilling called hydraulic fracking. Drillers pump water and chemicals deep into underground shale formations and blast the natural gas out.

Halliburton developed the method, now the EPA has subpoenaed the company for refusing to disclose which chemicals they’re using. Meanwhile there’s a gold rush on for the natural gas locked in the Marcellus Shale formation in Pennsylvania. Big oil companies have been gobbling up independent gas frackers there. In the latest deal, Chevron just bought Atlas Energy for 4 billion dollars. The other big natural gas news was Election Day. Living on Earth’s Jeff Young looks at the political landscape, and finds it good for gas.

YOUNG: The day after his election “shellacking” President Obama took a question at a press conference: where can Republicans and Democrats find common ground? Energy, the president said, and he emphasized one specific form of energy.

OBAMA: We’ve got terrific natural gas resources in this country. Are we doing everything we can to develop those?

YOUNG: Not far away, on Washington’s K Street, Chris Tucker and his officemates liked what they heard. 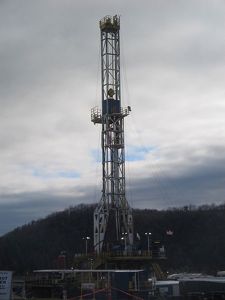 Marcellus shale gas drill in Pennsylvania. The frack drilling boom there has sparked fears of water contamination and a fractured landscape. (Photo: Ruhrfisch)

TUCKER: We all sort of looked around at each other and said, yeah, he’s right. Then our second reaction was, wow, we can’t believe he just said that! (Laughs)

YOUNG: Tucker is with a group called Energy In Depth, which does public relations work for independent natural gas drillers. Tucker says it’s not that surprising that the president should turn to natural gas. There’s already bipartisan support for using the huge supplies coming online, and Tucker says the industry’s wish list is a short one.

YOUNG: Tucker says the EPA is in the midst of a thorough review of hydraulic fracturing and some companies are voluntarily disclosing fracking chemicals. And concerns about water quality are likely more regional than partisan. The industry prefers to keep regulation at the state level and that means state election results could have a big impact, especially in Pennsylvania. The Keystone state elected a Republican legislature and governor. And Pennsylvania is at the cutting edge of a drilling boom.

JARRETT: Right now we’re having a gas rush. We happen to have the mother of all natural gas deposits under our feet in the Marcellus Shale deposit.

YOUNG: Jan Jarrett leads the environmental group Penn Future. She notes the gas industry has given nearly a million dollars to governor-elect Tom Corbett over his political career.

JARRETT: The drilling industry spent at least three million in campaign contributions. We would hope that does not change the administrations stance on environmental protection and oversight of an industry that has a really big impact.

ONEILL: Everybody’s got one but us. As I said in an earlier column, there’s only two places without this tax: Pennsylvania and Fantasyland. 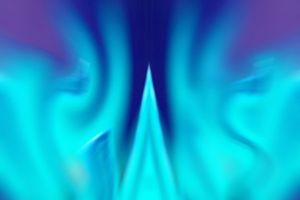 Natural gas emits half the greenhouse gases of coal and about a third less than oil for the same amount of energy. (Jean Schweitzer)

YOUNG: With the state looking at a multi-billion dollar deficit, O’Neill wonders where money will come from for, among other things, the Department of Environmental Protection.

ONEILL: That’s a serious concern to a lot of people. I mean there are real environmental issues and I don’t think the state is prepared to deal with it right now.

YOUNG: While many grassroots environmental groups are focused on the potential damage from drilling, some Washington environmental groups want to expand the use of natural gas, because it’s much cleaner burning than coal or oil. That’s created considerable tension within the environmental community. Dan Weiss directs climate strategy at the Democratic-leaning think tank, Center for American Progress.

WEISS: Both groups who want to use more natural gas and those who want additional protection are correct. Nat gas produces 50 percent less global warming pollution compared to coal and about one third les compared to oil. So the expansion of natural gas as a fuel can really reduce emissions by a sizeable amount. 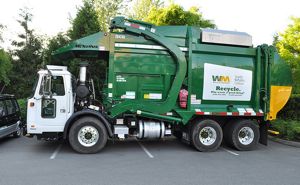 A garbage truck powered by natural gas. Each one saves the equivalent greenhouse gas emissions of hundreds of cars. (Jeff Youngstrom)

YOUNG: Weiss’s group did a study that found a shift to natural gas for big trucks could cut oil use by a million barrels a day--about five percent of our current use. But Weiss is also concerned about lax regulation on drilling. He sees opportunity to do both.

WEISS: In any natural gas program that moves forward, that encourages the use of more gas, needs to also include additional protections. It ought to include requirements that companies report on toxic chemicals they use to produce the gas, and they ought to make sure they protect the drinking water and air quality.

YOUNG: So can natural gas fuel some bipartisan cooperation? The first test could come in the lame duck session of Congress. The Senate is set to vote on a bill to use more natural gas for heavy-duty trucks. The co sponsors are Democratic leader Harry Reid and arch-Conservative republican Tom Coburn. For Living on Earth, I’m Jeff Young.