The South Pacific island of Norfolk is taking part in a groundbreaking experiment for reducing personal carbon emissions. Dr. Garry Egger of Australia’s Southern Cross University is giving islanders a carbon budget - rewarding residents that stay under their allotment. But, as he tells host Bruce Gellerman, his idea has come under attack.

GELLERMAN: It’s a two hour jet flight from Brisbane, Australia to what was once called “hell in paradise”. Remote Norfolk Island is 13 square miles of volcanic rock rising out of the crystal clear South Pacific. It’s home to two thousand people and one major tourist attraction.

Each year 30 thousand tourists come to see what’s left of Norfolk Island’s 18th century penal colony; a deplorable place where inhumane conditions earned Norfolk its nickname. But Norfolk Island is now working on a new reputation.
Scientists plan to turn it into a living laboratory - a giant experiment designed to solve two of the world’s most vexing problems: global warming and obesity. The idea: “a carbon credit card” that would help Norfolk Islanders reduce their green house gas emissions and the size of their waists.

Dr. Garry Egger is in charge of the plan. He’s a professor of lifestyle medicine and applied health promotion at Southern Cross University in New South Wales. Hi Professor!

GELLERMAN: So, tell me about this card.

EGGAR: Ultimately there would be an electronic card and that electronic card may be on an existing credit card, or it may be a totally stand alone card. So, that when somebody goes to buy their petrol or their power, not only do they pay in money, but it comes off the carbon units that they’ve been allocated, for free, at the start of a set period.

And, let’s say that after they’ve paid all their power for that period, they’ve got a hundred credits left, they can then cash that hundred in at the carbon bank and make money over it, and hopefully, improving their health over the long term. 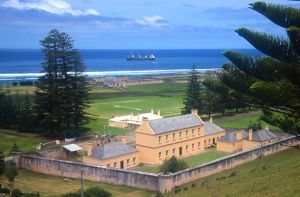 The prison island once known as “Hell in Paradise” may show us how individuals can slow the planet’s warming. (source: wikimedia commons)

GELLERMAN: How could it improve their health?

EGGAR: Well, for example, if you are walking, or riding push-bike instead of riding in your car, presumably by not using the carbon you will increase your physical activity level which is going to help the health. But ultimately, we also help to look at foods and we hope to put a carbon price and a health price on foods so that carbon units are detracted for unhealthy and high-carbon emitting food.

EGGAR: Exactly. That’s the way it’s designed. Now, long term, it’s quite possible too that the people who don’t reduce their emissions and in fact become very profligate in their use of energy, who are more likely to be the rich, may have to go and buy more units as the units go down each year- as the number of units go down.

But that’s still to be determined by the islanders. We haven’t instituted that, we haven’t suggested that at this stage. We want to make it a totally positive approach, because one of the things that we are testing is whether the public will accept it. Because if it’s not acceptable to the public, then it’s unlikely to be picked up in this day and age by any government, anywhere around the world. 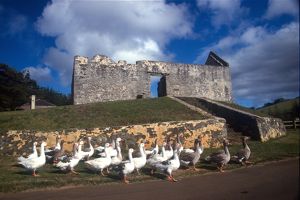 Norfolk is home to 2000 but 30,000 visitors come to see its prison ruins every year. The experimenters hope that the incentives from the carbon credit card will also draw tourists. (source: wikimedia commons)

GELLERMAN: Are people that live on this island, um, overly obese?

EGGAR: They’re about the same as the rest of Australia, and Australia is not far behind the United States in terms of obesity. So, we’re up in the top six or seven in the world. It happens with rich countries. As a country gets richer, it tends to get fatter.

GELLERMAN: But it seems to me one of the outcomes of this is that you reduce climate change gasses and nothing changes with obesity.

EGGAR: That’s another possibility, of course. For example, if you got people out of their gas driven cars and into electric cars, that may reduce the carbon emissions, but it’s not going to help their obesity, because they’ll still be driving around the town.

But, as I say, this is just a trial, it has to be tested and this is the best way to test it- on a self-contained island. And it has to be democratic, in this day and age as well, it can’t be imposed, it has to be run by the islanders themselves. The reason I’m going out there tomorrow is that we’ve been attacked by some of the far right here, with the climate change. One particular shop-jock here in Australia, his name is Andrew Bolt, and he’s a bit similar to your Rush Limbaugh.

GELLERMAN: Why don’t we see if we can tune some of that in and play it for our listeners:

BOLT: Their ration credits runs out and you’ve made food too expensive for them to buy, what happens to them?

EGGARS: Well, again, they get money back from doing the right thing.

BOLT: No, but they’ve done the wrong thing, because that’s why their fat and poor.

EGGARS: He did an interview with me, in which he didn’t ask the questions about it being voluntary and being run by the islanders and so on. And, as a result, he attacked me personally.

GELLERMAN: So, your job now is to sell it to the islanders?

EGGARS: Well, we had sold it to the islanders. I mean, that’s the whole thing, this is not something that has been imposed, it’s been…we’ve been a year now in discussion with the Parliament and with the people on the island. But, up until such time there was an adversary action, the islanders were only sort of minimally interested. And, now, they’re more interested and we have explain it in much more detail to them.

GELLERMAN: So what are you going to call this carbon credit card?

EGGAR: That, again, is up to the islanders. They came up with the name for the project which is a niche project, which is N-I-C-H-E, which is Norfolk Island Carbon and Health Evaluation Programme. And, it fits nicely, because it is a niche island, and this is a niche program. And, it’s a test as I keep saying.

But again, I go back to this notion, and I plead ignorance to some extent on the whole climate change issue, in the sense that we are health scientists who are looking to do something about the major health epidemics of the day- that is obesity and type 2 diabetes- but we are looking to do it within a context of being able to also reduce pollution and emissions, which no one has looked at to date.

EGGAR: Thanks very much, Bruce.