Carrotmobs and the Power of Buycotts

From Montgomery, Alabama to South Africa, activists have learned that they can influence change by organizing where people shop. Now, conscious consumers are using a new tool to encourage business to go green. Instead of using the stick of boycotts, they are wielding the carrot of “buycotts.” Shoppers all over the world are organizing to mob businesses that make the largest pledge towards sustainable practices. Host Bruce Gellerman speaks with Brent Schulkin, founder of the group Carrotmob.

GELLERMAN: From subsidized ethanol to something completely different…It’s party time at Living on Earth.

WOMAN: I’m completely blown away by the turnout.

MAN: I’ve been amazed at the number of people that are showing up.

GELLERMAN: Take out your glitter makeup, your acid washed denims, and don’t forget your wallet. This ain’t no disco, this ain’t no foolin’ around. This is a Carrotmob. Carrotmob is a way for environmental activists to capitalize on capitalism. Using the power of their purse to persuade businesses to go green. For example getting a liquor store to put in energy saving light bulbs.

In 2008 Carrotmob Founder, Brent Shulkin, biked to 23 stores in San Francisco and promised the owners more customers if they pledged to invest a portion of their proceeds towards energy efficiency. At the convenience store that pledged the highest, Brent made it rain money.

MAN: CFL’s and bourbon together at last. It’s about time, right? Somebody had to do it.

BRUCE: That somebody is Brent Schulkin. Founder of Carrotmob. Forget sticks and protests to get companies to do the environmentally right thing, Shulkin says, why not reward businesses with a Carrotmob.

SCHULKIN: A couple years ago I was in San Francisco, and I got on my bike and rode around to 23 different convenience stores. And, at every store, I went in and I said, ‘what I’m going to do is I’m going to bring hundreds of people to one store on one day and we’re just going to spend a ton of money.’ And so what I asked was what percentage of this revenue we would bring will you set aside and reinvest in energy efficiency upgrades to your store?

Finally, one store said, ‘I’ll give you 22 percent of everything you guys would spend.’
So then I turned around and went to the community, put up some fliers and spread the word on the internet and said ‘everyone come down.’ And then on the day of the Carrotmob, hundreds of people showed up at this convenience store, there was a line around the block. When it was all over- their typical daily revenue is maybe 18 hundred dollars, a little more than that one the weekend- we brought in 92 hundred dollars in just a couple hours. 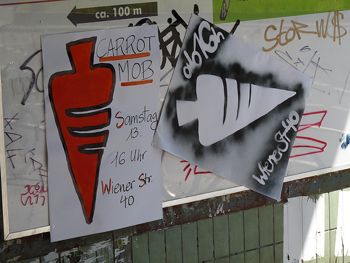 German consumers have been especially receptive to Carrotmobbing. (Photo: Carrotmob)

And, in exchange, they took a big chunk of that money and did a full lighting retrofit of their store to be more energy efficient.

GELLERMAN: So, who organizes a Carrotmob?

SCHULKIN: Well, what happened after that first was this video spread like crazy. And we just started getting emails from people around the world who said, ‘hey, I saw what you did in San Francisco, can we do it, will you support us?’

So now we’ve grown to a global network of people and we’ve seen organizers in Helsinki who’ve organized a mob of a nightclub, Bubble Tea stand in Singapore, in Thailand we’ve seen a school that banned plastic bags at a grocery store, and all across the U.S. The biggest countries are actually Germany and Finland. They are just nuts for Carrotmob.

GELLERMAN: I guess you call it, not a boycott, but a buycott.

SCHULKIN: Yeah, I mean, Carrotmob is basically the opposite of a boycott. You know, in a boycott, you say, ‘alright, we’re not going to spend any money at this business until you change.’ But a Carrotmob you say, ‘we’re going to ask all of you businesses to compete to say who is willing to do the most socially responsible thing, whatever we ask.

And, whoever wins, we’re all going to come and spend money- we’re going to mob you with spending.’

GELLERMAN: How do you ensure that the company or the business that says that it’s going to do something socially beneficial actually does something.

SCHULKIN: I used to worry about that. I thought it was sort of the Achilles heel of this movement. I don’t anymore. And, the reason is that almost all of these businesses are in it- some are in it for the cash- but a lot of them are in it for the reputation, the long-term value of being seen as this great business in the community.

And, if you’re in it for the reputation, you know how harmful it would be if you then said, ‘haha, just kidding, we didn’t follow through, suckers!’ We just haven’t had any problems, and we’ve now had 112 or so campaigns and there’s never been a problem with it. So, I don’t worry about it anymore.

GELLERMAN: So, you’ve had over a hundred Carrotmob campaigns, any quantification of the results?

SCHULKIN: Well, yeah, most of the campaigns so far have been focused on energy efficiency. The best estimate that we have is that I think we’ve saved around 18 million kilowatt hours of electricity. But, this is not our own, exact data, this is just some projections that we have, so, as we raise money we’re going to be building out some better tools for measuring our impact.

GELLERMAN: Does this work principally with small stores, or could you use it for big box stores as well?

SCHULKIN: Ah! Well, you’re barking up the right tree! So, we want to make an enormous network of people. I’m not going to be satisfied with a million people, I want, you know, five, ten, twenty, fifty million people.

The reason is, if you can get that many million people in this network, you could do Coke vs. Pepsi, Nike vs. Reebok, you could start retrofitting and changing policies at some of the world’s most powerful companies.

GELLERMAN: Actually I could see this being a lot of fun, you have these mobs swarming to a store and turning into, really, kind of a pleasant community activity. 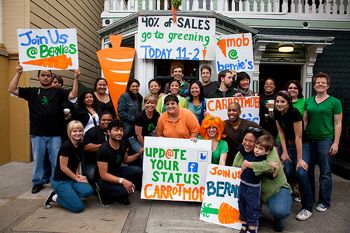 SCHULKIN: Yeah, and you know, one other sort of fun idea that I have been mulling is- imagine SuperBowl 2014 comes along and all across America we’re having these big SuperBowl parties as Americans do, and what if we said- we’re all going to buy either Miller Light, Coors Light or Bud Light for our SuperBowl parties- which is going to be a whole lot of beer. Which of those companies is willing to have a wind-powered brewery?

Or you know, maybe it’s a new maternity leave policy- we could ask for anything. That’s the type of campaign- how fun would that be? Who wouldn’t join in on that sort of campaign? And that’s, you know, I think there’s such a broad appeal to this movement, it’s so easy to get involved that I hope that we can have everyone join the network and we can grow the network to the point where those things are possible.

SCHULKIN: Well thanks Bruce, I’m glad I was able to spread the word a little bit!


Want to know more about Carrotmobbing your town?