Out of (a noble) Gas

The Federal Helium Reserve in Amarillo, Texas holds the world’s largest supply of useable helium. But that stockpile will be depleted within five years. Emily Guerin reports on the coming helium shortage.

GELLERMAN: Helium is a noble gas – and much more than the stuff that sends SpongeBob skyward at the Macy’s Thanksgiving Day Parade. It also keeps MRI magnets cool and cleans rocket engines. Helium is also very common; after hydrogen, it’s the second-most abundant element in the universe. Here on earth though, supplies are running low. Living on Earth’s Emily Guerin has the story.

[SOUND OF BALLOON BEING INFLATED, SQUEAKS.]

RICHARDS: (In a chipmunk voice) See, you gotta suck down.

GUERIN: Employee Amy Richards and I are the only ones in the Party Plus store in Biddeford, Maine. We’re taking turns sucking on helium from yellow balloons.

GUERIN: That’s awesome!… I offer to pay Amy for them, but she says not to worry about it. Helium is cheap, a Party Plus balloon only costs 90 cents. And that, says Nobel Prize-winning Cornell physicist Robert Richardson, is the problem.

RICHARDSON: The birthday party consumption of helium is probably only five percent, but it’s more symptomatic of the waste. 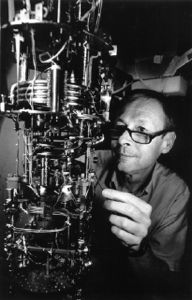 GUERIN: Helium has always been so cheap that it doesn’t make economic sense to recycle it. Reseachers let the gas escape after using it in their low-temperature physics experiments. After the Thanksgiving Day Parade, the huge balloons are just deflated. And after using the gas to clean rocket engines…

RICHARDSON: NASA vents the helium into the atmosphere. And that’s a form of squandering.

GUERIN: Dr. Richardson says up until now, that waste hasn’t been a problem. There’s always been enough helium to go around. But that’s no longer the case. In fact, the world supply of readily available helium is running out.

GROAT: Helium comes from the decay of radioactive material in the crust of the earth and it’s very light of course so it escapes.

GUERIN: Dr. Chip Groat, a geoscience professor at the University of Texas-Austin.

GUERIN: One of the most helium-rich natural gas deposits in the world lies beneath the southern Great Plains. And there, just outside Amarillo, Texas, is the federal helium reserve-- an underground helium storage area managed by the U.S. government. The reserve was created back in the 1920s, when helium-filled airships looked like one of the military vehicles of the future. But then came the Hindenburg disaster…

[NEWS CLIP OF THE HINDENBURG DISASTER: “OH THE HUMANITY!!”]

The Crude Helium Enrichment Unit at the Federal Helium Reserve in Texas. (Photo: The Bureau of Land Management)

GUERIN: The Hindenburg exploded because it was full of flammable hydrogen, not helium. Still, after the disaster, airships, whatever they were filled with, fell out of favor. But Dr. Groat says helium found a new niche.

GROAT: The use of it in welding, the development of MRIs required helium. And then a lot of pretty important low-temperature physics research that was of strategic importance to the United States also uses a lot of helium. So the feeling was still that we needed a reserve of helium, but for different purposes.

GUERIN: But according to Dr. Richardson, by the 1990s, the feds saw things differently.

RICHARDSON: The argument was that the Cold War was finished, and the federal government had no business competing with private industry.

GUERIN: Also, the helium program had cost the taxpayer one point four billion dollars. The government wanted that money back. So in 1996 Congress passed the Helium Privatization Act, which planned to sell off all the helium in the reserve by 2015. In the meantime, the world changed. China and other industrializing countries in Asia started gobbling up helium, demanding more and more to produce LCD screens and fiber optics. And suddenly, scientists in the U.S. started having a hard time getting a hold of helium. Again, Dr. Groat.

GROAT: Frankly the group that became the most alarmed was the research community that uses helium and found it couldn’t afford it anymore, and in some places it couldn’t even get it anymore because it was being competed for by commercial people who could pay more money.

GUERIN: Even though helium is the second most abundant element in the universe, it’s expensive to strip it out of natural gas deposits. Other countries have helium.

RICHARDSON: Russia. Or Qatar. Or Algeria.

GUERIN: But Dr. Richarson says they’re not refining it yet. He thinks they’re holding out for economic reasons.

RICHARDSON: They are anxious for the United States to run out of helium because the price of helium will just sky rocket.

GUERIN: So the world isn’t running out of helium. But by selling off the federal helium reserve, the US runs the risk of depending on unknown or unfriendly sources for this essential element, says Dr. Groat. 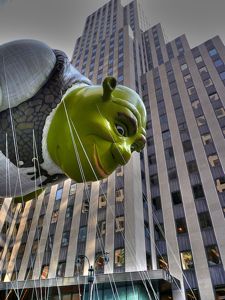 Big balloons like this one at the Macy’s Thanksgiving Day parade are only a small fraction of the total world consumption of helium. (Photo: Flikr/Joiseyshowaa)

GROAT: Getting information about market prices and supplies in other parts of the world has been extremely difficult. I would be very surprised if we’re running out, I think we just haven’t found and developed the resources that are out there.

GUERIN: In the meantime, there are some substitutes for helium. Argon can be used for welding. And there are ways to recycle helium instead of just venting it into the atmosphere, and that could be come more popular after the U.S. reserve runs out. But until other countries start producing, everything that uses helium--MRIs, TV screens, even balloons--will likely become more expensive. So talk like one of the chipmunks while it’s still cheap.

[INHALES AIR FROM A BALLOON]

GUERIN: (In a chipmunk voice): For Living on Earth, this is Emily Guerin.


Read the full report of the Committee on Understanding the Impact of Selling the Helium Reserve.