Ben Shelly is the President-Elect of the Navajo Nation. He talks with host Bruce Gellerman about the future of coal, renewable energy and tribal sovereignty in Navajo land.

GELLERMAN: The tune may sound familiar…but the words may sound strange.

GELLERMAN: This is Radmilla Cody singing “God Bless America…” in her native language--Navajo.

GELLERMAN: The Navajo Nation is the largest tribe in the United States in terms of geography and population. And on November 2nd, Navajos voted for their president. The winner was Ben Shelly, the current Vice President. Here’s a clip of Shelly during a presidential debate.

SHELLY: We want your help to build this nation, to be competitive in the world. We’re a sovereign government for Christ’s sake, why can’t we do things for ourselves and be who we are supposed to be: a great Navajo Nation.

GELLERMAN: The Navajo Nation President-elect Ben Shelly will lead is resource rich, and dirt poor. Half the population is unemployed. Navajoland is huge, spreading out over four states where Arizona, Utah, New Mexico and Colorado meet. It sits on vast reserves of coal. Unfortunately, the coal is buried deep under the high desert. But Shelly says coal is where the future of the Navajo Nation lies. 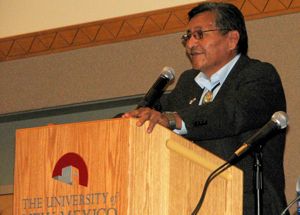 SHELLY: Coal is our major resource right now and 200, 200 years of coal that we have, and so it’s- we’re not going to do away with the coal, I’m sure we can use it. We’re working with the environmentalists, within the law we can use that coal safely. And then also make money and create jobs.

GELLERMAN: I mean, your coal expensive even relative to Wyoming where they just scoop it out in open mines. Yours is pretty expensive.

SHELLY: Yeah, it is (laughs). But, that’s what we have, we have to deal with it. Just cause it’s expensive doesn’t mean we’re not going to use it. We’re going to use it for our benefit. We also need to realize that we also have to deal with the environment and how to use that safely. So that we get support from all of the greenhouse people, environmentalists and all that so, you don’t want to fight them. So we always say take care of Mother Earth, and that’s what we do.

GELLERMAN: Coal provides the Navajo with a third of the tribe’s income and hundreds of jobs. But these days it’s becoming increasingly difficult for the Navajo to dig their coal and burn it in power plants located on their Reservation.

The U.S. Environmental Protection Agency and federal courts have been restricting the mining and use of Navajo coal. One of the coal-fired power plants on the reservation is among the most polluting in the country, sending smog over the Grand Canyon. So now, President-Elect Ben Shelly says the Navajo are looking towards Father Sky.

SHELLY: We can put a solar panel anywhere on the reservation, it’s prime area. This is a God-given country that God gave us and we can use that sun and make money off of it and make electricity. You know, coal will go away, and it gets, you know, mined out and it’s gone, but sun will always be there until God decides the world should end, so that’s going to be forever.

GELLERMAN: Can we place coal with solar?

SHELLY: Yeah, I don’t know how large it is going to be, we’re pioneering renewable energy. It’s there but how much energy can it create? Is renewable energy enough to supply the whole world? So, I still think that we’re still going to need some sort of a power plant to meet that kind of the demand of the population on energy.

And, the other thing that we’re thinking about- building as much renewable energy as we can, and also manufacturing all those parts ourselves, and also selling renewable energy to states. As you know, there’s 15 percent now that’s being called out to every states, that’s a mandate, that they have to use some form of alternative energy. And, some states don’t have these alterative energy, that’s where we will sell our energy to.

GELLERMAN: Despite Shelly’s optimism, renewable energy on the reservation is still pie in the sky. Coal sustains the nation, but even within the tribe, its continued use is controversial.

[WOMAN AT PROTEST: OSM, you can’t hide, we’ll charge you with genocide!]

GELLERMAN: In 2008, Navajo demonstrators gathered in Denver, protesting the re-opening of the Black Mesa coal mine.

[WOMAN AT PROTEST: We, Navajo and SOMETHING tribal members, have come to Denver to meet with the Western Regional Office of Surface Mining… ]

Emissions from the coal-fired Navajo Generating Station are responsible for haze over the Grand Canyon. The plant is the eighth dirtiest in the country, releasing 20.1 million tons of carbon each year. (Photos: Alex E. Proimos/Flikr)

GELLERMAN: Protesters prevailed; Black Mesa was shut down. And a federal judge would later prevent another coal mine from expanding, ruling that it would harm an ancient tribal burial site. But Navajo President-elect Ben Shelly says the decision cost the tribe 400 jobs. And the federal government should keep its laws off Navajo land.

SHELLY: Well I know that the federal law does cover us in certain areas. This is the first time that I’ve ever heard a federal judge dealing with coal, and they’re talking about sacred sites. You know, as you know, we have sacred sights- like San Francisco Peak. Where’s that judge at? I’d like to see him come in and have him help us out over there because we’ve been crying about sacred sites that were there, and what did they do? The approved it for a ski resort.

So, tell me what, tell me what’s going on here? The Indian tribes like the Navajo Nation are educated enough to run their own nation, and I still think that there are some people out there trying to keep us tied down so that you, you as a taxpayer- you, I think you’re getting a little tired of feeding us, you know? So, I thank all the taxpayers for supporting us this long, and let us run our own nation and let us run our own resources and help us along as we go along. Yeah, I’m getting a little bit emotional here- the Navajo Nation is ready to go on its own.

GELLERMAN: That’s Ben Shelly. He takes office as the next President of the Navajo Nation in early January.