Delegates in Cancun have another year’s worth of climate science research to consider. Host Steve Curwood talks with Harvard Professor Daniel Schrag, a member of President Obama’s Council of Advisors on Science and Technology, about some of the most sobering studies of the past year and what they mean for the changing climate.

CURWOOD: To talk about the latest research, we turn now to Professor Daniel Schrag. He studies climate change at Harvard and directs the University’s Center for the Environment. He’s also a member of President Obama’s Council of Advisors on Science and Technology.

SCHRAG: You know there's a nice study that really put all this together that came out this year from the National Academy, and basically tripling atmospheric carbon dioxide levels, which we are likely to do in the next hundred to a hundred and fifty years, is really unprecedented, and there are all sorts of things that are going to have difficulties adapting to that, including human society. We are going to see devastation of species- something like 40 percent of the biodiversity is ultimately threatened today because it’s happening at so fast a rate that animals can’t migrate.

The other thing that came out of this National Academy report is the idea that fundamentally, what matters to climate change is the total greenhouse gas emissions of the planet over the next hundred years. Some of the climate policies that are focused on getting a ten or twenty percent reduction in the next ten years or twenty years- the bigger scale of things, actually that doesn’t matter so much. The bad news is of course, is that we have to ultimately drive greenhouse gas emissions to nothing to fix the problem.

CURWOOD: What about the permafrost? There was a study that was reported on, I think in the Journal of Science, on the melting of the permafrost that’s under the Arctic Ocean. What did you think of that study?

SCHRAG: Well, I think that study and many others similar to it, have pointed over the last many years to the amplifying factor of the permafrost melting which leads to lots of soil carbon both in the form of methane and the form of carbon dioxide being released into the atmosphere, and, providing a positive feedback to the burning of fossil fuels. Another way to think about this is that we’ve started the ball rolling from burning greenhouse gasses from fossil fuels and now the natural carbon system is going to take over. And the big question is: how fast does the methane and CO2 get released?

CURWOOD: So what other studies from this past year looked into feedback loops from natural systems that might amplify climate change?

SCHRAG: Well, one very important change that is continuing to occur is the melting of Arctic sea ice. And, the big story this year was that we didn’t set a new record in terms of the area of arctic sea ice, but if you actually look at the images of the arctic ice cap what you see is the area of very thick ice that is there perennially year after year, was almost half of what it had been in 2007. So, even that though there was a lot of ice cover, the actual permanent very thick ice had decreased significantly.

CURWOOD: Now, arctic ice is already in the ocean, so if it melts it doesn’t raise the sea level. What about the ice that is on the ground in places like Antarctica and Greenland?

SCHRAG: When we project sea level changes due to melting of ice, we tend to be extremely conservative. And so, for example, in the last IPCC report, what they did was they essentially assumed that the current rate of melting from Greenland would persist unchanged for the rest of the century, and that leads to only five centimeters of sea level rise from the melting of Greenland over the entire century.

Now, if you were to actually do a risk analysis, what you might do is perhaps assume that as the earth warmed, the ice would melt in proportion to the warming. If you make that simple assumption, you end up with the result that was published this year showing that perhaps the better estimate of sea level rise over the century is about one to two meters. So, three to six feet of sea level rise threatens every coastal city in the world. It’s a really big deal.

CURWOOD: Lets talk about drought. What have we learned in the past year about the prospect of drought as a function of climate change.

SCHRAG: Climate change is likely to bring more stress on both natural ecosystems and human society that will make dealing with droughts more and more difficult. For example, high altitude glaciers all over the world in the tropics are melting and exponentially increasing rains. And, since they’re the source for a lot of water in very important, strategic rivers all over the world, it means that when you have a drought because of meteorological conditions and you don’t have the backup of mountain-fed streams and rivers, it makes dealing with that drought all the more difficult.

CURWOOD: What about food? We’re going from six billion, well actually almost seven billion, to some nine billion in 2050 or so. How will climate impact our ability to feed ourselves?

SCHRAG: One of the interesting studies that has come out over the last few years suggests crops have a very complex relationship to not just rainfall, but actual temperature. For mild temperature increases, yields increase a little bit and then they cross a threshold and drop very dramatically. And, it’s a non-linear effect. A nice example is 2003 when Europe had that devastating heat wave and crop yields dropped by about 30 percent. 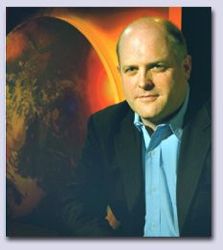 That 2003 temperature is likely to be the average temperature a hundred years from now, for summer. And there’s a real question we have about plant physiology. Do we think that our ability to genetically engineer plants and selectively breed them- will we be able to find crops that produce high yields in a warmer climate and currently, there’s some research that suggests no. In fact, there are real physiological limits to plants because of the cycling of water through their stems that may fundamentally limit their productivity. We may see a big drop-off in food production.

CURWOOD: Now of course, you’re close to the White House, being on president Obama’s council of advisors on science and technology. How is the science that we have been discussing being presented in that setting and what feeling do you have that the President gets this?

SCHRAG: I have been in a meeting with the president where myself, and a number of other climate experts, briefed him directly, and it was very clear that the president does get it. He does understand how serious a problem this is. What he’s struggling with through a rather severe recession is, how to get the American public concerned about acting on climate change when they’re really worrying about their pocket books. And, that’s a very difficult problem. I don’t envy him. But, in terms of the science, in terms of the ultimate impact, he does understand it.

CURWOOD: Harvard Professor Dan Schrag, thank you so much.

Visit the President’s Council of Advisors on Science and Technology, PCAST’s, website

Read climate reports put out by the National Academy of Sciences