One problem with forest conservation under REDD is ensuring the rights and livelihoods of people that live in and depend on, tropical forest. While some countries are keen to write explicit protections for forest peoples, most are not, and its unclear what kind of guarantees might come out of negotiations in Cancun. Living on Earth’s Mitra Taj brings us the story.

CURWOOD: Along with the threat of corruption, there is another risk of the forest carbon protection scheme called REDD—the displacement of peoples who have traditionally lived there.

More than 350 million people around the world live in or near forests. And while there are now successful pilot efforts to mediate the tensions between various commercial interests and forest dwellers, climate negotiators have yet to agree on language to protect forestry community rights. Living on Earth’s Mitra Taj has our story, and she begins her report on the island of Sumatra in Indonesia.

TAJ: Saruha is a community leader of the village of Rokan Hulu on the island of Sumatra. On a cloudy day he stands on a hill on the outskirts of the village and waves his hand toward a vast expanse of trees.

VOICEOVER: (In Indonesian) In the past, all of this land belonged to the people.

TAJ: He says the land used to be everything for the villagers—a source of food, a source of building materials, where future farm plots would support generations to come. But in the ‘90’s when the Forestry Ministry wrote the land into a concession for a pulpwood company, it became the stage for a tragic conflict. 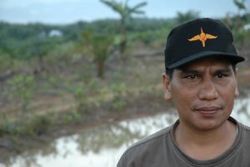 Saruha says he will keep fighting the pulpwood company until they recognize their right to the land. (Photo: Mitra Taj)

TAJ: Saruha says the deal denied villagers access to even a small slice of the forest. They protested by cutting down pulpwood trees. The company, PT SSL, a supplier of the paper giant APRIL, had the police arrest the protesters…Tensions rose, and during a meeting with company officials, chaos broke out. Villagers threw rocks, and Saruha says the company’s security guards started beating villagers with sticks covered in nails.

VOICEOVER: Everyone was running in every direction to save their lives. I ran to a pick-up truck, 30 people got on. We took off and the company’s employees came chasing after us in another car. We got away, and a few days we found two dead bodies in a nearby pond.

TAJ: He says another bruised body turned up later in the forest. Three village women became widows, including Rosita, the young mother of three boys.

VOICEOVER: I don’t know exactly why my husband died but I know my husband died here. It’s very sad and very hard because he was the leader of this family; he struggled for the land because the land feeds his children. 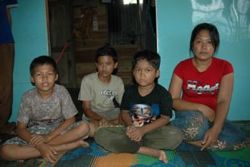 Since her husband's violent death, Rosita has cares for her three boys on her own. (Photo: Mitra Taj)

TAJ: The head of PT SSL, Pohan says his employees didn’t kill anyone and didn’t do anything wrong, but that he gave Rosita and the other widows the equivalent of about $2,000 out of compassion. The local police chief Ansori claims Rosita’s husband and his friend fell into the pond and drowned because they couldn’t swim; and the third man died from exhaustion as he ran through the forest.

But Nurkholis, an investigator with Indonesia’s independent Human Rights Commission, says the incident, from beginning to end, violated basic human rights. The central government didn’t take the villagers’ land claims seriously and didn’t mediate a solution, the police didn’t do their job—the bodies were marked with signs of torture, but autopsies were never conducted. And the case, he says, is far too common in Indonesia.

TAJ: In Indonesia, 65 million people live off forests—most of them, like the villagers of Rokan Hulu, have no official rights to the land they consider theirs. In the eyes of the Forestry Ministry, they’re squatters occupying a national resource. And Indonesia is not alone—governments own about 75 percent of the world’s forests, less than ten percent legally belong to communities.

TAJ: At climate talks in Cancun, Mexico, with the eyes of the world now on REDD or forest protection as a way to fight climate change, the stakes have been raised, and many worry a final REDD agreement won’t do enough to protect people.

RIGGS: I think REDD without rights guarantees is potentially a disaster.

TAJ: Peter Riggs works for the Ford Foundation. He says the language that will determine which course REDD takes is being written now in Cancun and could affect generations to come.

RIGGS: If REDD proceeds in a top-down way where governments reassert control over forested areas, and in many places the only way they can reassert that control is through the militarization of the forest, basically sending in troops to kick people out of places where they’ve traditionally lived in order to secure the carbon benefits of REDD, that is a social disaster.

But if REDD were to move in such a way that community rights were guaranteed and in fact led to a reduction in forest conflict, then REDD could be a very positive thing.

TAJ: Right now the current REDD negotiating text mentions support for the rights of indigenous and local communities, but Tom Goldtooth, the executive director of the Indigenous Environmental Network and a member Dine’ and Dakota tribes, wants specifics.

Some wonder if the delegates at the COP16 Climate Change Conference will create a REDD agreement that protects indigenous people. (Photo: UNFCCC)

TAJ: Goldtooth says he doesn’t want to see his indigenous brothers and sisters in tropical countries lose their land and way of life, and key to securing their rights under REDD are four words: free, prior, informed consent. Peter Riggs says that provision is controversial in Cancun.

TAJ: Bolivia is one of the few that are willing. Chief negotiator Pablo Solon not only wants to put in more language on community rights on REDD, he wants to take out market incentives—no trading carbon credits, and no allowing polluters to offset emissions by paying others to protect forests.

SOLON: We think that it’s crucial to protect and preserve forests and we think we should protect forests through public funds. What we don’t agree is that we will use a very good and very noble cause in order to promote something that only will worsen things, and that is the market mechanism that will commodify, at the end, the forest and nature. That is what we don’t support. We have said it very clearly.

TAJ: Because the UN climate negotiations require all countries to be on board before agreement can be made, Bolivia could prevent a REDD agreement from being finalized…Tom Goldtooth says stopping an agreement that doesn’t include stronger guarantees for forest communities would be a good thing.

GOLDTOOTH: Right now a lot of the movers and supporters of REDD here are saying, well trust the process, there will be safeguards we just need to move forward. We can’t do that because history has shown that often in these developments and under the economic paradigms that we have right now our local communities are very often they end up dead, you know…

TAJ: Weak land rights for forest peoples in some tropical countries aren’t just a concern for negotiators in Cancun right now; they could make it tough to get REDD going, even if an agreement comes through next week.

RIGGS: Everybody assumes the private sector will want to rush into REDD once its set up as a global mechanism. My conversations with private investors say that they are extremely wary about REDD, and the reason that they’re wary about it is because they don’t want to get involved in a situation where there are land conflicts. And they have not only financial risk, but real reputation risks associated with that.


Click here for more of LOE's coverage of REDD.